For the past several years, Atlanta has emerged as a leading center for global health with the presence of the Centers for Disease Control and Prevention, the Carter Center, the Task Force for Global Health, the Rollins School for Public Health at Emory University, the Morehouse School of Medicine, MedShare, MAP International, the CDC Foundation, CARE to name a few.

But Atlanta’s global impact does not stop there. Atlanta is home to numerous philanthropic organizations and corporations that contribute to the well-being of citizens around the world — Habitat for Humanity International, the American Cancer Society, the Coca-Cola Co., Delta Air Lines, United Parcel Service, Home Depot among others.

On Friday night Oct. 18, CARE will celebrate its 20th anniversary of being based in Atlanta with a gala event at the Atlanta History Center with CEO Helene Gayle as the host.

Given all its international connections, it is not surprising that Atlanta has been selected to host the 2015 Nobel Peace Prize Laureates Summit — largely at the urging of Muhammad Yunus, who won the Nobel Peace Prize in 2006 and who has made Atlanta his second home.

Yet, despite all the elements of fine work and good will that exist in Atlanta, something is lacking — a focal point to bring it all together.

A galvanizing event — akin to the Clinton Global Initiative — could be what Atlanta needs to connect all the players who are working to improve the livelihood and living conditions of people around the world.

At this year’s Clinton Global Initiative, several of the Atlanta players were unveiling the expanded partnership of one of the most exciting new international efforts on the horizon — the Global EKOCENTER Partnership.

It exemplifies the magical intersection of global health and global development that is Atlanta’s sweet spot.

The Coca-Cola Co., working with a host of other partners including Atlanta-based UPS, will be placing between 1,500 to 2,000 EKOCENTERs in 20 countries by the end of 2015.

The EKOCENTERs include the technology breakthrough of inventor Dean Kamen called: Slingshot, a water purification system that can turn salt water, sewage water or contaminated water, into 1,000 liters of pure drinking water a day using minimal energy that can be powered by solar panels or biomass. 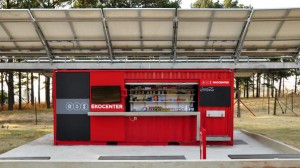 At Coca-Cola’s 2013 annual meeting on April 24, CEO Muhtar Kent highlighted the social impact that Slingshot and the EKOCENTERs could have on impoverished, water-stressed communities.

“Clean water is critical to having sustainable communities,” Kent said. “Fifty percent of the world’s hospital beds are occupied by people who are there because they don’t have access to clean water.”

Often it is women who have to spend all day carrying water from an adequate water source to their community. The Slingshot “can put clean water right in the communities, giving time back to young women and girls,” Kent said.

By locating the Slingshot within an EKOCENTER, Coca-Cola and its partners can create a new community center — a place that can have electricity to provide refrigeration, telecommunications, satellite communications, education, medicine and other amenities that often aren’t available in remote areas. 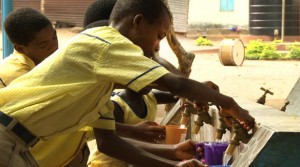 “These centers can be turned into businesses and can become hubs for sustainable communities,” said Kent, who envisioned women entrepreneurs running the EKOCENTERs..

Kamen, who was at Coca-Cola’s annual meeting, said the implications for this development were significant.

More and more people around the world are moving to cities seeking a better life. But many of the world’s cities can’t handle dramatic increases in population — because of congestion, pollution and strains on the urban infrastructure.

The EKOCENTERs would give people the ability to be connected to the modern world while being able to live off the land. Kamen said that instead of trying to move everybody to cities, they could stay in their communities to create a sustainable future.

Coca-Cola’s EKOCENTER partnership is a wonderful example of the symbiotic relationship between global health and development, and Atlanta has so many of the right players — nonprofit, for-profit, academic and government — to build similar alliances.