My penchant for stuff traces to my maternal grandmother, whose home was filled with Roseville pottery, Depression glass, Hummel figurines and salt-and-pepper shakers. These items reflected her ideas of pleasure, beauty, home and comfort.

Her scrap iron and metal business (a.k.a. junkyard) in Twin Falls, ID was dropoff point for spare metal collected on the home front to help fight World War II. This collection reflected her community’s identity as small-town Americans marshaling every last resource for freedom’s sake.

Since 9/11, I have collected intangible souvenirs. These are words, memories and observations that, in my life as a writer, represent my stock in trade.

These reflect my ways of making sense of an event that changed the world as we knew it. 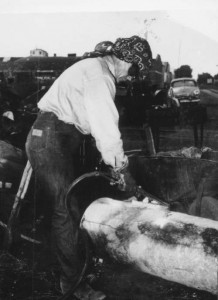 The meanings and connotations of many words changed after 9/11.

Ground Zero was a figure of speech, not a place. “Let’s roll,” was a rah-rah cliché. I would have picked waterboarding as a new event in the X Games.

The lexicon of mainstream news did not include WMD and IED, hijabs and Kevlar, Mosul and Kandahar and Abu Ghraib.

“Homeland” connoted security. “Package” was not often preceded by “suspicious.”

Profiling was my job, and it meant writing about people’s lives.

No longer would I see a firefighter entering a tall burning building as simply doing his or her job. The mundane assumed risk, and out of that risk came opportunity. Unlikely jobs produced heroes.

This was seen even in middle management. Read the 9/11 Commission Report about how the FAA traffic controllers scrappily landed hundreds of flights safely. There was no policy or game plan, no time for the top brass to send a memo, so they did what they had to do.

In another surprising and related twist: Capitol Hill with the writing chops to contend for the National Book Award. The Commission Report could have been full of bureaucratese, but instead reads like a novel.

This single day created new ways to make a living, to capitalize on our trying-to-be-brave new world. Before 9/11, a contractor was someone who built a house. The list of hot careers didn’t include air marshal or TSA screener.

On 9/11, in the newsroom where I then worked, we watched as people fell from the Towers, and then the Towers one by one, and in replays over and over.

Inside me, the understanding of human decency crumbled. How do we then live in a world with such premeditated evil?

In the news business, 9/11 was a very long day. I was the last parent to pick up my child at preschool. Other parents had rushed over as soon as they had heard the news, and didn’t we all want to hold on to who we loved?

As a new parent, with daughters 18 months and not yet 3, I was thankful that they were too young to need details, and sorrowful that they would grow up in the aftermath. That evening, we met friends in an eerily quiet DeKalb County park, with no planes roaring overhead, no trains rumbling, everything still except for the current of uncertainty running through all of us.

From 9/11 came many forks in the parenting road. Choose fearfulness or fearlessness? Teach selflessness or protectiveness? Surely every generation of parents deals with these “–nesses,” and so I looked to the wisdom of my parents, who raised us in the Cold War, and their parents, who managed families in the Depression and World War II.

In Atlanta, this new era offered other models of resilience. I loved the creative expressions springing from 9/11, such as Avondale Estates artist Cecelia Kane’s Hand to Hand Project.

She and guests artists have painted a news story daily on a stuffed white glove, created a rosary of remembrance. She just returned form taking her show on a cross-country trip, and kept a blog. Her collection became part of my repository of hope for the future.

Privacy and secrecy were clear, separate ideas that in the scramble for a sense of safety became scrambled by the Patriot Act. The boundary between individual and government blurred.

Americans were asked to watch critically for any belongings or activity that didn’t look right. At the same time, we were asked not to question our own government. Thrust into an era of hypercriticism and watchfulness, we were asked to put aside our own critical thinking.

We were urged to collect bottled water, duct tape and plastic sheeting. We were told to take off our shoes, belts and hats and submit to a pat down. This was and is so we can feel safe, collectively.

The next right thing wasn’t and isn’t so obvious any more. Case in point: personal finances. On 9/12, I no-showed my mortgage broker. How could we refinance our home amid such uncertainty? With the President urging us to save America by spending, we chose to simply save. Freedom meant the bank collected less from us, and that decision helped weather the economic collapse of 2008.

Post-9/11 America offered new litmus tests for life, liberty and happiness. What was the new cost of following? What risk did we take now to lead?

Orange, yellow, red and green used to me just colors, not threat levels.

Never before did the number of ounces in a travel shampoo matter. A quart-size Ziploc bag belonged in a kitchen drawer. To open a package, I used a box cutter, trusting its safety lock.

Now all of the above carry new symbolism and meaning. They tell a new story of what we have been through and become, and the choices that we made and new ones that face us every day.

A must watch on this subject is the PBS series “Objects and Memory.” It examines how in crises, we often cling to items that remind us who we are and who we can still be.

Collecting objects, memories and beliefs can help us recover and move on.

This is my collection. What’s in yours?

Previous Article
Gov. Nathan Deal restarts tradition of partnering with Georgia Research Alliance
Next Article
Solar energy already works in Georgia, but it can do so much more for our state’s economy