Back in the early 1990s, small- and mid-sized arts organizations in metro Atlanta had no lifeline to help them through the tough times and nurture them into vibrant entities in our region.

That’s when Lisa Cremin stepped in, first as a consultant to the Community Foundation for Greater Atlanta, to create the Metropolitan Atlanta Arts Fund in 1993. 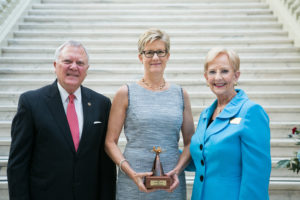 Lisa Cremin with Governor Nathan Deal and Mrs. Sandra Deal in 2016 when Cremin was presented with a Governor’s Award for the Arts & Humanities during a ceremony at the Georgia State Capitol. (Special: Community Foundation for Greater Atlanta)

For more than 25 years, Cremin has been the founding director of the Arts Fund – overseeing a total of $14.5 million in 208 separate grants to arts organizations with budgets of under $2 million. The work of the fund has helped stabilize and strengthen arts organizations that were in need of community support.

Now Cremin will be stepping down at the end of November.

“It’s been 25 fantastic years,” Cremin said in a recent telephone interview. “I’ve done my best. It’s time to hand it over to someone else.”

The Community Foundation will be hiring a consultant to look at how the Arts Fund fits with its overall focus on equity of opportunity and its important contributions to small- and mid-size arts organization, according to Alicia Philipp, the foundation’s president and CEO.

“I feel we have done some really impactful work,” Cremin said. “We cover a 23-county region that’s as diverse as it can be, and we bring people together to know each other and feel they are part of the community.”

For the past 15 years, the fund has been awarding between $500,000 and $1 million annually to arts organizations to help them achieve tangible goals, such as being able to hire a director of development or marketing.

In addition to the grants, it has provided a “toolbox” by bringing in consultants through the Georgia Center for Nonprofits to give professional guidance to those organizations.

“We always hope we are starting a domino effect through our support,” Cremin said. A grant from the Arts Fund has become a selling point when organizations approach other donors to invest in their mission.

There are four or five arts groups in Atlanta that have budgets of more than $2 million, beginning with the most prominent one – the Woodruff Arts Center. The others include the Center for Puppetry Arts, the Atlanta Opera and the Atlanta Ballet.

But the Community Foundation and the Arts Fund understand that Atlanta needs to build an ecosystem of healthy arts organizations that can contribute to the overall vitality of the region.

The Arts Fund is a permanent fund of the Community Foundation, so it will continue to invest in smaller arts organizations.

Cremin said Georgia continues to rank last, or next to last, in per-capita public spending for the arts, when makes it even more important to have private funding for these smaller arts groups.

It is not just about the arts, she said. It’s about equity and building a creative economy. Children who are exposed to the arts at a young age tend to have greater success as students and eventually in their careers.

Looking ahead, Cremin said she doesn’t know what will happen next. “I want to take a breather,” she said. “I love international travel. And I’m excited to see a lot of art that I haven’t had a chance to see.”

At the Atlanta Regional Commission’s State of the Region breakfast on Nov. 8, Alicia Philipp gave a powerful talk about the diversity of leadership – or the lack thereof – in metro Atlanta.

She had just announced the day before that she would be retiring as CEO of the Community Foundation for Greater Atlanta in 2020 after 42 years in that role.

“People like to talk about ‘the Atlanta Way’ – this nostalgic idea that we’re somehow special, that there’s no such thing as racial lines or gender barriers in the way we work,” Philipp told the crowd of nearly 1,525 attendees.

“I’m here to tell you, sadly, that hasn’t always been true in my experience,” Philipp continued. “While the Atlanta Way may have worked for some, it worked only marginally for others, if at all. It’s time to get over the nostalgia for this narrative we keep telling ourselves.”

She then challenged the crowd to create a “new Atlanta Way – one that lives up to the promise we all deserve, a promise our neighbors deserve – all of them – not just a privileged few. We need a way forward that unites, not divides.”

But Philipp added that she will not be part of building that new Atlanta Way.

Once the Community Foundation has identified her successor, she will retire and spend much of her time in Portugal and Guatemala.

“It’s time to let the next generation take the reins,” Philipp said, adding that being “the city too busy to hate” was too low a bar.

The Atlanta Land Trust and Latin American Association (LAA) have been named as the 2019 Bank of America Neighborhood Builders awardees as part of the bank’s 100 years in Atlanta.

The nonprofits were selected for their work to address issues fundamental to economic mobility, ensuring opportunities are within reach for all Atlantans.

As an awardee, each organization will receive a $200,000 grant, a year of leadership training for the executive director and an emerging leader at the organization, a network of peer organizations across the United States, and the opportunity to access capital to expand their impact.

Over the past 15 years, Bank of America has invested $240 million in 49 communities through Neighborhood Builders, partnering with more than 1,000 nonprofits and helping more than 2,000 nonprofit leaders strengthen their leadership skills.

At an Atlanta community celebration on Nov. 14 at Georgia State’s stadium, Bank of America presented the heritage of the bank award to Georgia State University President Mark Becker and Veronica Biggins, who became one of the highest-ranking banking females in the country when she worked for Bank of America.

“With 100 years of history in Atlanta, we are committed to giving back to our community,” said Wendy Stewart, Atlanta market president for Bank of America. “Neighborhood Builders gives nonprofits the power to advance in the community. ALT and LAA are instrumental in providing basic needs and community development that tackle the most-pressing issues facing Atlanta.”