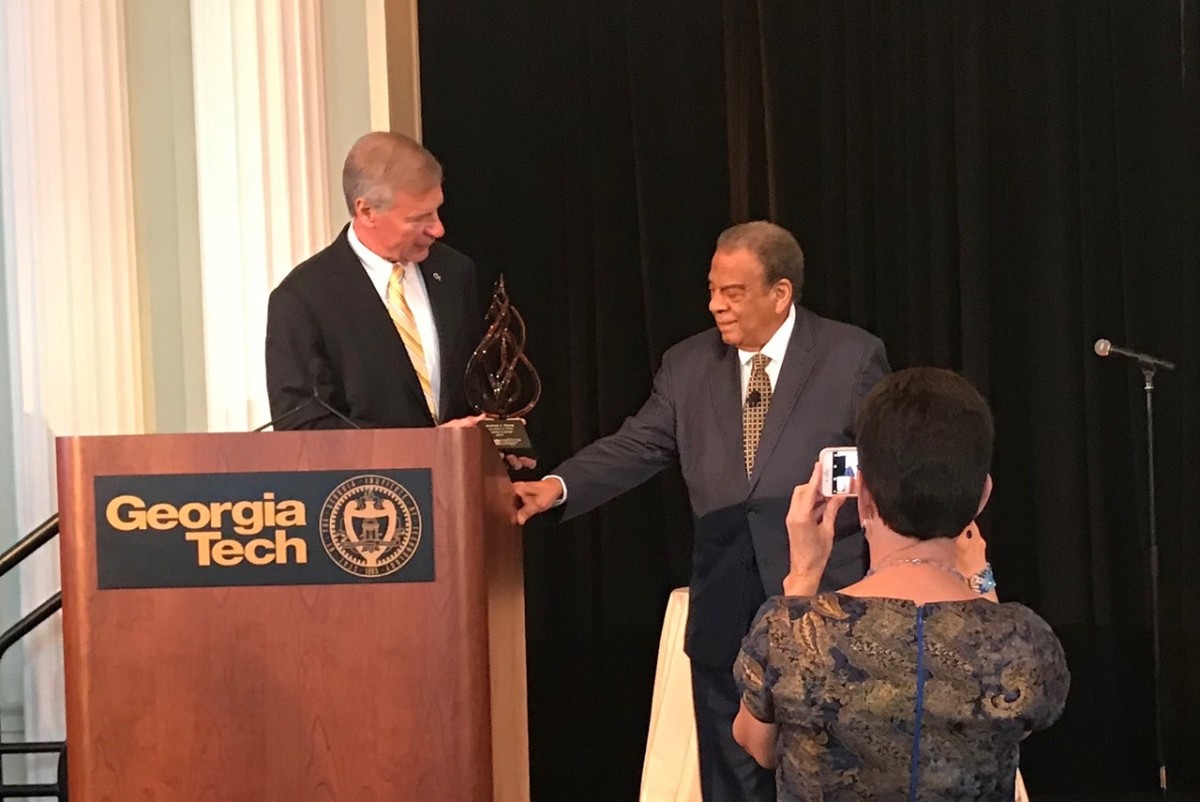 By Maria Saporta
As published in the Atlanta Business Chronicle on Sept. 21, 2018

When former Atlanta Mayor Andrew Young received Georgia Tech’s Ivan Allen Jr. Prize in Social Courage on Sept. 13, he turned it into a love song for Atlanta – past, present and future. 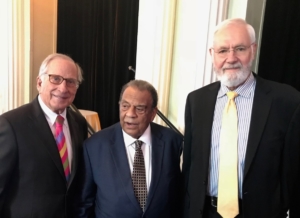 Young remembered meeting with Allen in the mayor’s office in the middle of the 1968 Atlanta sanitation workers strike.

“I stayed there for an hour,” Young said. “I got a course on how to be mayor of Atlanta.”

Receiving the prize helped close a circle for Young. He is the first Atlanta mayor to receive the annual $100,000 prize that was named after another Atlanta mayor. That history was not lost on Young.

“What Ivan Allen did, and what we are most famous for, is making us like a family,” Young said, referring to Allen’s leadership during the Civil Rights era. “Ivan Allen gave his life to give us the good life. We should share it.” 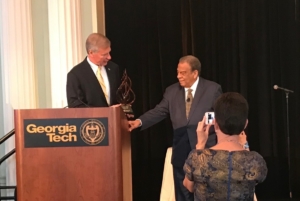 Young also acknowledged former U.S. Sen. Sam Nunn and Dr. Bill Foege, the first two winners of the Allen Prize. Nunn has been working to remove the international threat of weapons of mass destruction. Foege led the effort to eradicate small pox from the world.

Young said they “helped us realize we can change the world from this city.”

Young then added, “I don’t think God is through with us yet.”

He unveiled his vision to making “Atlanta a city of peace,” mentioning local efforts to host the Summit of Nobel Peace Laureates here in 2020” and having Atlanta become “a capital of peace-making.”

In a panel discussion before the lunch award ceremony, Young said many don’t appreciate the fact that Atlanta is not a government-run city but a capitalist-run city. 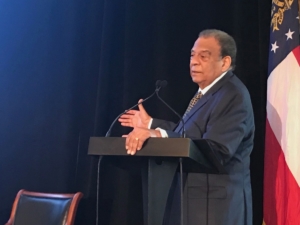 “We have learned to make capitalism work with democracy,” Young said. “I don’t believe that anybody but Atlanta can save Africa.”

By the turn of the next century, he said Africa will be home to half the world’s population. “We need every American industry to start thinking about how to make this a peaceful world.”

Young, 86, also referenced getting ill after the events surrounding the 50th anniversary of Martin Luther King Jr.’s assassination this past April. He remembered that King and he used to say: We may not make it to 40, but if we do, we will make it to 100.” King was 39 when he was killed.

“I’m still here,” said Young, who pledged to continue to help lift up Atlanta. “Something special is here. We must bring peace among nations.”

It is actually a third retirement for Bankoff, who retired as a partner of King & Spalding and then went on to be president and CEO of the Woodruff Arts Center, a position he held for six years until 2012.

Georgia Tech said a search for a new chair is underway. Anna Westerphal Stenport, chair of the School of Modern Languages, is leading the search committee.

“I am excited to see the results of the many projects Joe is pushing forward in his final year as chair,” Royster said. “He already has positioned us well for the future.”

Bankoff said the timing is now right for him to make way for a new chair. “The faculty here now feels empowered,” he said. “And we are moving forward and have a sense of momentum.”

Atlanta-based Aaron’s Inc. will renew its national partnership with Boys & Girls Clubs of America with a three-year, $5 million commitment.

“We knew when we began our partnership in 2014 with Boys & Girls Clubs of America Keystone Club, and believe even more strongly today, that this program is a vital resource for thousands of youths in communities across America,” said John Robinson, CEO of Aaron’s.

The renewed partnership will build upon the successes the two organizations have achieved since launching the partnership. Aaron’s has sponsored the last four national Keystone Conferences, where thousands of teen leaders from across the world gather and discuss important issues in their lives and communities. The last conference was held in Atlanta in June.

“We’ve seen the positive and life-changing effects of our partnership with Boys & Girls Clubs over the last four years,” Robinson said. “We’re committed to continuing our support of this incredible organization that not only provides a safe place for teens after school, but also helps in shaping our leaders of tomorrow.”

The Boys & Girls Clubs of America, which dates back 150 years, also is based in Atlanta.

Two well-known Atlanta business leaders, Frank Blake and John Schuerholz, have been selected as the 2019 trustees of the Georgia Historical Society.

Blake is a retired chairman and CEO of The Home Depot Inc., and Schuerholz is the vice chairman emeritus of the Atlanta Braves.

“Frank Blake and John Schuerholz reflect what is best in the original Georgia Trustees,” said W. Todd Groce, president and CEO of the Georgia Historical Society. “Their commitment to the common good and their insistence on putting others first are in keeping with the leadership of James Oglethorpe and the other visionary founders of Georgia. Through their character, modesty, and comportment, Frank and John are prime examples of everything a great leader should be.”

The sold-out luncheon was hosted by Kathy Waller, the chief financial officer of The Coca-Cola Co. The luncheon brought together influential corporate, social and philanthropic leaders, including top donors to the Girl Scouts.

“The Girls Scouts is about empowering girls from all backgrounds and building them into women who can influence their communities to change the world,” Moore said. “I’m happy to help support programs that maintain these efforts as part of its mission.” 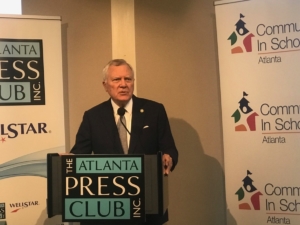