By Maria Saporta
As published in the Atlanta Business Chronicle on January 1, 2016

As Atlanta Falcons owner Arthur Blank reduces his day-to-day responsibilities in running his business interests, he has brought on a high-powered team of executives to lead the AMB Group LLC.

Stephen Cannon, CEO of Mercedes-Benz USA, will join the AMB Group as its CEO Feb. 1 when he will oversee all of Blank’s private business interests. 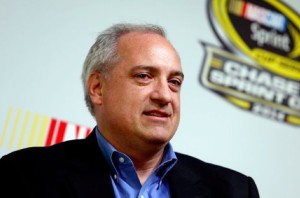 The AMB Group also has made another major hire: Brett Jewkes, who will serve as senior vice president and chief communications officer. Jewkes is filling part of the role that had been held by Kim Shreckengost, who was Blank’s executive vice president. She had worked with Blank for decades, going back to when he was running The Home Depot, which he co-founded with Bernie Marcus.

Jewkes comes to Atlanta from Charlotte, N.C., where he served as senior vice president and chief communications officer for NASCAR. He joined NASCAR in 2011.

Before that, Jewkes was a managing partner with Taylor, a brand counselor and public relations firm.

Jewkes worked on the NASCAR account beginning in late 2000 before he joined the company, where he was in charge of NASCAR’s relationship with the operators of the NASCAR Hall of Fame.

“Brett has made significant contributions to NASCAR as a trusted member of our management team and skilled leader of our world-class communications group,” said Brian France, NASCAR’s chairman and CEO, in a release announcing Jewkes’ departure. “He has passionately promoted NASCAR for the last 15 years and we know he will continue to be a great friend and ambassador for the sport. We wish Brett and his family all the best and and continued success in this new opportunity.”

In an interview on Dec. 29, Jewkes said he was looking forward to working with Blank’s diverse endeavors.

“I attracted by the diversity of the businesses, the diversity of the sports. The philanthropic piece was a massive part of my decision-making process,” Jewkes said, adding that he married a woman — Melissa — who has a huge heart and some of that has rubbed off on him.

He said he also was impressed by Blank’s genuine concern and commitment to the world around him.

“It would have taken all of those pieces to leave NASCAR because I loved it and I loved the France family,” said Jewkes, who is looking forward to becoming involved in Atlanta. “My family is eager to be part of this community. It’s a great city. I would love for this to be my last career stop.”

The grants were made through the foundation’s new grant-making initiative called the Pipeline Project, which seeks to build a new talent pipeline in the fields of science, technology, engineering, arts and mathematics — the STEAM subject areas where Georgia forecasts job growth.

The Pipeline Project awards grants to classroom teachers and after-school and summer programs, building both the supply of and the demand for STEAM programs among children and families.

In support of classroom teachers, The Pipeline Project awarded a $55,000 grant to DonorsChoose.org, an online crowdsourcing platform. Attracting matching donations from 465 donors, the Pipeline Project partnership with DonorsChoose.org funded projects across 71 high-need public schools in Atlanta, Fulton and DeKalb public schools. These classroom projects will reach more than 15,000 students.

In support of community-based programs that deliver hands-on learning opportunities and maker experiences for students during the summer and after-school hours, The Pipeline Project has awarded $405,000 in grants to eight organizations reaching more than 1,700 young people.

“The Pipeline Project believes in learning by doing and seeks to use experiential programs to draw more students into a pipeline that promises personal and professional growth,” said Penny McPhee, president of Blank Foundation. “We are investing in innovations that set learning on fire.”

Perkins-Hooker currently is vice president and general counsel for Atlanta BeltLine Inc., where she has been for the last six years. She has worked as a practicing attorney for more than two decades, and she is the immediate past president of the State Bar of Georgia. Perkins-Hooker said she should begin her new role as Fulton County’s attorney on Jan. 19 provided there are no issues that come up.

When asked why she was interested in joining the county, Perkins-Hooker emailed the following comments:

“I was interested in being a part of the team that the board of commissioners has assembled to move the county forward,” she wrote. “They have hired a new county manager, a new CFO and now a new county attorney. I hope to help lead the department through this transition period and support the legal team as it seeks to become the best county law department possible.”

By the way, Perkins-Hooker is married to Doug Hooker, executive director of the Atlanta Regional Commission.

“I strongly believe HBCUs [historically black colleges and universities] are vital in preparing the next generation of African-American business owners, attorneys, doctors, artists and civic leaders and I am honored that with our annual UNCF Mayor’s Masked Ball, we are able to help fund the education of thousands of students matriculating at the Atlanta University Center,” Reed said.

Former Atlanta Mayor Andrew Young loves to talk about the “Atlanta Way.” In fact, that is the informal title of his latest documentary, “The Making of Modern Atlanta.”

The first hour of the documentary was shown to a group of local leaders at the studios of Georgia Public Broadcasting on Dec. 14, followed by a panel discussion. GPB will air part one of the documentary on Jan. 7 at 8 p.m., and it will air part two a week later on Jan. 14, also at 8 p.m., according to Andrea Young, who was instrumental in putting the project together.

Hala Moddelmog, president and CEO of the Metro Atlanta Chamber, said “the Atlanta Way” is an important selling point for the city. “Whenever we are recruiting a company, we all talk about the Atlanta Way,” she said during the panel discussion.

Young also talked about how he was reluctant to run for mayor, but he was confronted by Susie LaBord, a public housing leader, who told him that he owed it to Atlanta to run. Young also ran across the book by Jane Jacobs, “Cities and the Wealth of Nations,” that convinced him cities develop wealth in society.

Teya Ryan, GPB’s CEO, asked Young whether the city is still practicing the Atlanta Way. “I think so,” Young said.