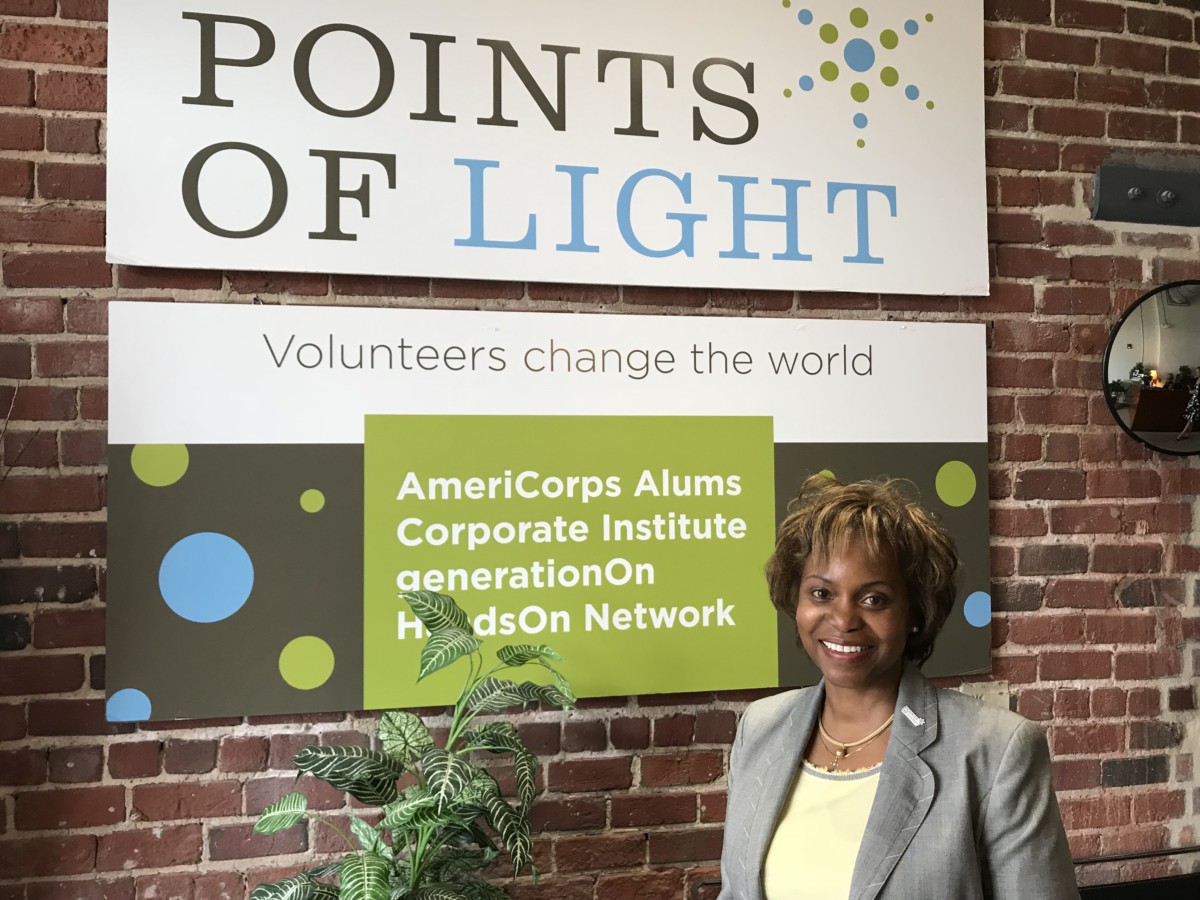 By Maria Saporta
As published in the Atlanta Business Chronicle on July 20,2018

In her role as president and CEO of the Atlanta-based Points of Light, Natalye Paquin has found herself in the company of former U.S. presidents.

But her biggest challenge was responding to President Donald Trump earlier this month when during a speech at a rally in Great Falls, Montana, he mocked Points of Light — a phrase used by former President George H.W. Bush in his 1989 inauguration speech. 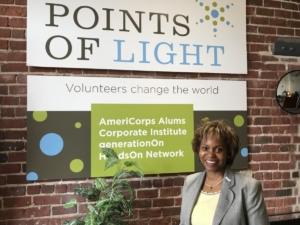 Paquin said the Points of Light organization seized upon the moment.

“We took the opportunity to educate people on who we are and what we do,” Paquin said in an interview. “We saw an increase of individuals coming to our website to learn more.”

The Points of Light Foundation was founded in 1990 to recognize people who were making a difference in their communities. It relocated its headquarters to Atlanta in 2007 thanks to a merger with Atlanta-based HandsOn Network, an organization that promotes volunteerism in communities.

“I’m really enjoying being here at Points of Light,” said Paquin, who joined the organization last September after serving as chief transformation officer at Girl Scouts of the USA in New York City. She grew up in South Florida, but spent most of her career in Chicago and Philadelphia.

Now she is completely focused on living in Atlanta and working for Points of Light. 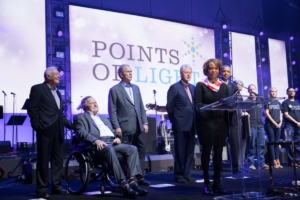 Natalye Paquin at the One America Concert with five former presidents (Special: Points of Light Foundation)

“It has an amazing history,” she said. “I feel there’s a special reason to be here at this time with all the challenges in the world.”

Points of Light now has affiliates in 37 countries. It recognizes “Points of Light” five days a week — shining a spotlight on people who are making a difference in their communities.

“It is to lift up and share the story of individuals doing work in their community,” Paquin said, adding that 62 million Americans volunteer each year. “President H.W. Bush believed there are lights in every one of us. The solution to community problems rests within the individuals in those communities.”

Paquin said Points of Light is in the midst of a three-year strategic plan to focus on building the capacity of the volunteer networks and partnering with other “do-good” organizations.

One key area of focus is its Corporate Service Council, which has 87 members representing major companies in the country. The chair is Ed Martinez, president of the UPS Foundation. 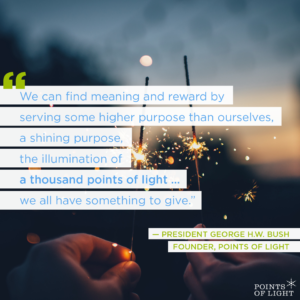 “We’ve really been growing over the past five years the number of U.S. companies with a global presence and activating those companies in other countries,” Paquin said. “Volunteerism may look a little different (in different countries). What’s not different — the interest and need to get engaged.”

Although she has been in Atlanta for less than a year, she is a staunch defender of the city as the place for POL’s headquarters.

“Atlanta is an international, global city, and we should make no excuses of why a global organization is in Atlanta,” said Paquin, who joked that she moved from Midtown Manhattan to Midtown Atlanta.

Her husband Marc Paquin, a French Canadian, moved to Atlanta in January to work for the British Consulate here, and they are planning to buy a residence in Midtown.

One of Paquin’s most special moments since becoming CEO of Points of Light was last November at the One America Concert in Houston where she stood on stage with five former presidents to honor five outstanding individuals from around the country. President Trump even shared opening remarks in a video.

“We are a nonpartisan organization,” said Paquin, noting that Neil Bush serves as its board chair. “We know that service unites.”

The Carters saw mental health medicines being prepared to be shipped to Liberia. 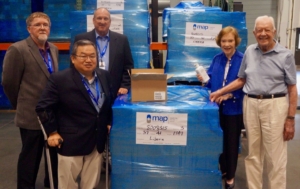 MAP International’s President Steve Stirling said the organization has provided mental health medicines to 15 hospitals and 67 clinics in Liberia. By working with the Carter Center’s 250 mental health workers in Liberia and the Ministry of Health, Sterling said MAP will provide enough medicines to help more than 80,000 patients in the West African nation this year.

Philip Mazzilli, MAP’s chairman who has served on its board for 10 years, said the visit of the Carters reinforced his passion for the organization.

“Here is another example of how well MAP is getting known,” Mazzilli said. “Last year MAP provided life-saving medicines to over 14 million people worldwide.”

Meanwhile, Stirling was honored with the 2018 Human Excellence Award on June 19 by the Hope Collaborative at Harvard University.

“Steve sees the potential for greatness in every child, especially those with serious health needs who can easily be overlooked in societies without sufficient health care resources,” said Kevin Sheehan, executive director and co-founder of the Hope Collaborative.

Stirling contracted polio at the age of one. From age two until his adoption by an American family at age 11, he lived in an orphanage in South Korea. He grew up to graduate from Cornell University, and later earned a master’s degree in management from Northwestern University’s Kellogg Graduate School of Management.

“I am deeply humbled by the recognition,” Stirling said. “I believe God allowed me to get polio for a purpose, and that’s why I’m so passionate about getting lifesaving medicines to people in need around the world.”

Dr. James Marks, the recently retired executive vice president for the Robert Wood Johnson Foundation, has been elected to the board of the CDC Foundation. Marks oversaw all grant-making, research and communications activities for the RWJ Foundation — the nation’s largest philanthropy dedicated solely to health.

During his 14 years at the foundation, Marks led many initiatives including efforts to reverse the epidemic of childhood obesity and ranking the health of all U.S. counties. He also worked with the Federal Reserve to bring the fields of community development and public health together.

Before joining RWJF, Marks held important leadership roles in public health, including serving as assistant surgeon general and director of the Centers for Disease Control and Prevention’s (CDC) National Center for Chronic Disease Prevention and Health Promotion. Throughout his tenure at CDC, Marks developed and advanced systematic ways to detect and prevent chronic diseases, to monitor their major risk factors such as tobacco use and the obesity epidemic and to improve reproductive and infant health.

“Jim is a respected leader in health and health care, and his commitment to creating a healthier society for everyone will be a tremendous asset to the CDC Foundation,” said Dr. Judith Monroe, president and CEO of the CDC Foundation. “His knowledge and deep understanding of philanthropy will be invaluable to our partnership-building efforts.”

“Kay’s community connections and ability to create strategies for our organization’s growth are immeasurable assets for Oakland and will serve us well in our impending capital campaign, while Tim’s community leadership and financial acumen will bring an even higher degree of fiscal responsibility to the organization and will serve us well as we expand our mission to restore and share this Atlanta landmark,” said HOF executive director David Moore.

Previous Article
Ed Bastian: Delta is back at the top of its game
Next Article
Junior Achievement launching national education program in Atlanta

Journalists are not enemies of the people, but writers for the people
Maria Saporta August 20, 2018 5:16 pm