By Maria Saporta
As published in the Atlanta Business Chronicle on January 10, 2014

The National Center for Civil and Human Rights had reasons to celebrate over the holidays — it had received a $2 million gift from the Robert W. Woodruff Foundation.

That gift means the Center has raised $80 million — all the money needed for construction, for the recently added $1 million water feature and a $5 million endowment that will support ongoing operations.

The Center will open May 22.

It also means that the Center has received 50 percent public and 50 percent private support. The city of Atlanta contributed $40 million toward the construction of the Center through funds collected from the Tax Allocation District.

“Obviously the Woodruff legacy in Atlanta is legendary philanthropically and in relation to the civil rights movement,” said Doug Shipman, president and CEO of the Center.

Coca-Cola magnate Robert W. Woodruff helped set a tone of racial tolerance in the Atlanta business community during the 1960s — helping the city avoid the violent confrontations that occurred in other Southern towns. He worked closely with then Atlanta Mayor Ivan Allen Jr., who was the only elected leader in the South to testify before Congress in support of the integration of public facilities.

So it is especially fitting that half of the Woodruff Foundation gift will go to paying for the dramatic water feature that will be on the public plaza connecting the Center to Ivan Allen Jr. Boulevard.

The other half of the Woodruff gift is just as meaningful to Shipman, who first met with Russ Hardin and other foundation leaders in 2007 to talk about the project.

“We often talked about how to build an economically viable institution,” said Shipman, adding that the Center’s board had to scale back their plans during the recession so the project would not only open debt-free but would be able to cover its operating expenses without additional fundraising.

“It’s been really helpful to talk about the business aspects of the Center. Most museums generate only 50 percent of their own revenue. We will generate more than 90 percent of our own revenue (through ticket sales, events and retail),” Shipman said. The other half of the Woodruff gift “is really aimed at launching us to be economically self-sustaining.”

Hardin, president of the Woodruff Foundation, said Shipman has provided “spectacular” leadership in developing the Center. “The Center will be a monument to Atlanta’s role in the American Civil Rights Movement,” Hardin said. “It also will be testament to [the center’s chair and former Atlanta Mayor] Shirley Franklin’s vision and Doug’s leadership and determination.”

The Girl Scouts of Atlanta has named Amy Dosik as its new CEO. 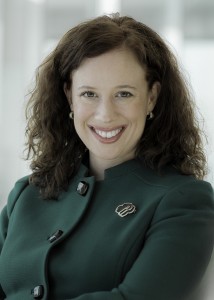 Dosik has worked with the nonprofit sector for 20 years, including serving as a principal at Ernst & Young LLP, an attorney with international law firms and as a founding board member of “It’s the Journey,” an organization responsible for operating the Atlanta 2-Day Walk for Breast Cancer.

“Amy Dosik has the vision and experience needed to continue the great work our organization is delivering to our community,” said Myra Bierria, board chair of Girl Scouts of Greater Atlanta, one of the most recognized leadership organizations for young women in Georgia. “Her leadership is critical to ensure that Girl Scouts continues to address the evolving needs of young women in the Atlanta metro area.”

Dosik is assuming the CEO position at a pivotal time for the organization as it works to strengthen its role in raising awareness around the metro area and as it seeks to address social barriers that prevent young girls from developing critical leadership skills.

“As a former Girl Scout, I am honored and humbled to join the leadership of the largest girl-serving organization in the world,” Dosik said. “Growing up, I was fortunate to have many adults who helped to make my world bigger by exposing me to new challenges, new experiences and new places. Today, I am privileged to have the opportunity to help cultivate, nurture and build the next century of female leaders.”

Southface has new volunteer leadership. As part of its annual meeting ritual, Southface — a leader in green building, and energy-efficient and sustainable development — held its “winter solstice” party in mid-December when it passed the leadership reigns from Charles Whatley, managing director at UrbanIS, who has chaired the board for two years, to Linda Bolan, a managing director of Jones Lang LaSalle Inc. Dennis Creech, executive director and co-founder of Southface 35 years ago, gave an annual report card of some high points for the organization.

The energy-efficient EarthCraft homes — a partnership with the Greater Atlanta Home Builders Association — is about to reach a milestone.

“Early in the new year, we will celebrate our 30,000th EarthCraft house,” Creech said.

Another high point for the organization is the “Grants to Green” program — now in its fifth year. Through a grants program made possible through the Kendeda Fund and the Community Foundation of Greater Atlanta, local nonprofits are given grants to help make their facilities more energy efficient. “It is saving nonprofits about $1.2 million a year in energy costs,” Creech said. “The program has helped more than 100 nonprofits.”

Now there is national interest in the program, he said. The Boys and Girls Clubs of America are about to launch a pilot program to begin making their centers more energy efficient. There are thousands of clubs around the country, Creech said, but the plan is to start with a pilot program of about a dozen.