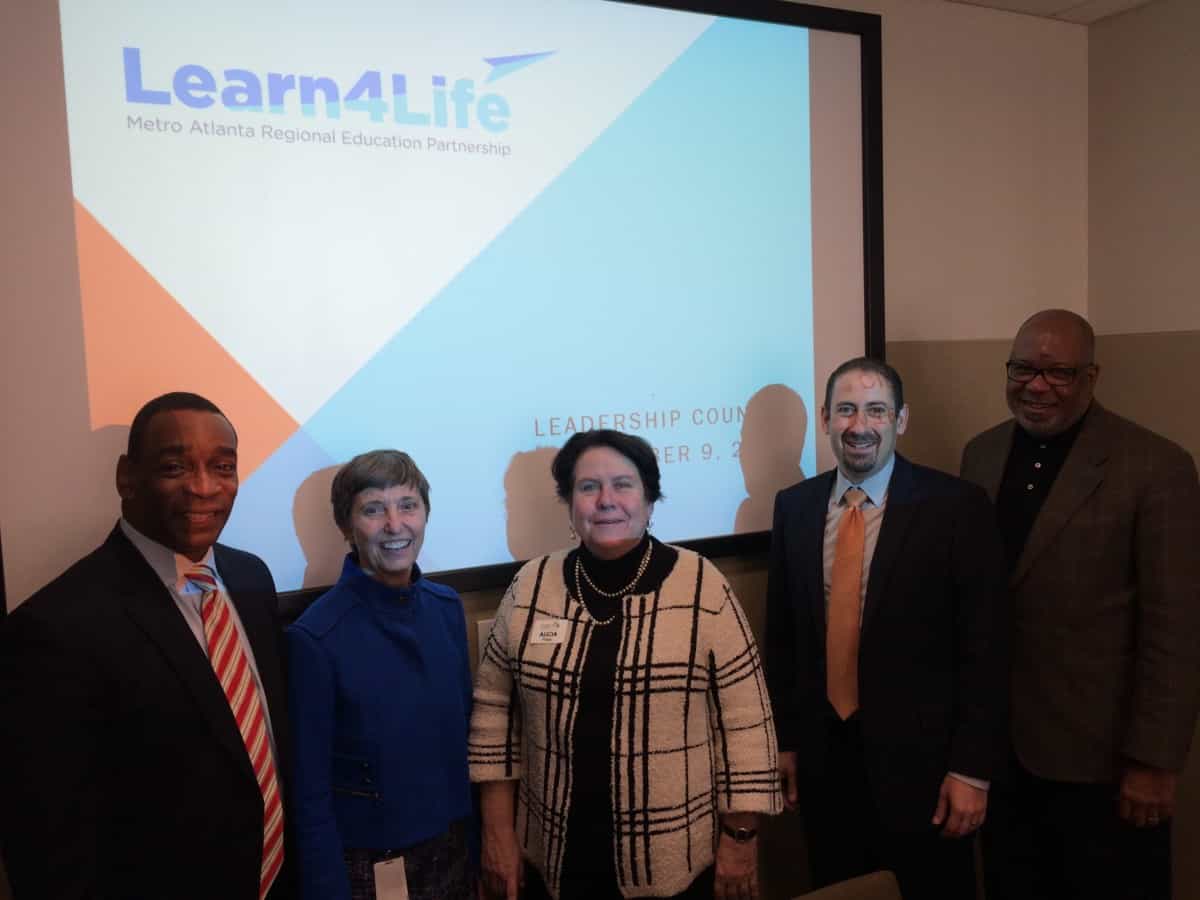 By Maria Saporta
As published in the Atlanta Business Chronicle on Dec. 16, 2016

A collaboration among Atlanta’s four regional organizations – Learn4Life – is going where no other group has gone in the region.

It is working with the eight school systems in the five-county region to figure how to have the most strategic impact on the educational outcomes among the region’s students.

Learn4Life has hired Ken Zeff, who served as interim superintendent of Fulton County Schools after serving as the system’s chief strategy and innovation officer, as its executive director. 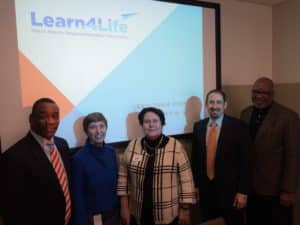 Alicia Philipp, president and CEO of the Community Foundation for Greater Atlanta (one of the four regional organizations), thought Zeff would be ideal to head up this unique collaboration.

“Alicia called me and said you’re going to do this,” Zeff recalled. About four months ago, Zeff started putting together Learn4Life, and it already has had its first meeting with the eight superintendents in the region. The school systems include: Fulton, Cobb, Gwinnett, DeKalb, Clayton, Atlanta, Decatur and Marietta.

Those school districts educate 600,000 students, about a third of the public school students in the state.

“The only time we did anything together was around weather,” Zeff said of the superintendents. “These political lines that we draw for school systems don’t mean much for parents, corporations or kids.”

Ann Cramer, a retired IBM executive who has been involved in virtually every educational initiative in Atlanta for at least 25 years, is on Learn4Life’s executive committee. She said that previously, “the irony was that we were not talking to the superintendents.”

Learn4Life is working on metrics to create a baseline of where the region stands, and then it will choose a few indicators to monitor what initiatives hold the most promise.

A few of those indicators could be kindergarten readiness, third grade reading scores and high school graduation rates.

In the spring, Learn4Life will release its baseline report – using data collected by the Atlanta Regional Commission (one of the four) through its Neighborhood Nexus program.

“We are not trying to get in the way of what districts are doing,” Zeff said. “We are trying to support their goals. We will help arrange marriages and remove barriers. We are going to make sure people have the data.”

Zeff went on to explain that the data will show what initiatives are most impactful and share those among the school systems. If the region can “get education right,” then it will set metro Atlanta on a path to break generational poverty. “Achieve Atlanta is a great example of how it can work,” Zeff said. “Why not have a Metro Atlanta Achieves? If the superintendents in the region lock arms, they will get the attention of business and philanthropy.

“There’s no metro Atlanta agenda because there are these centers of gravity. school boards,” Zeff continuted. “You have got all these big companies in the region. They think regionally but we don’t.”

The executives of the four organizations first met shortly after Hala Moddelmog became president and CEO of the Metro Atlanta Chamber in January 2014. Their first lunch was in the Woodruff Room at the Commerce Club, and Alicia Philipp looked up at the portrait of Robert W. Woodruff, who ran The Coca-Cola Co.

“There was not one white male among us,” she laughed. Instead these four leaders – two African-American males and two white women – are trying to change the way Atlanta does business by working together rather than in silos.

“We are finally at a point where the leaders have the respect and reverence of each other,” said Ann Cramer, who has been close to the growing alliance. “The sectors are so blurred in the real world.”

Doug Hooker, ARC’s executive director, said embraced the idea. “Wouldn’t it be great to get the four of us working together,” he said, echoing Philipp’s sentiments. “We don’t compete with each other. It would be great if we could. Of course it made a lot of sense to me. I represent an organization that constantly trying to bring people together.”

Initially, the executives met to share their organizational agendas, talk about the stresses within their own organizations. “It was a safe place,” Philipp said. “And then we asked: “What can we do together?”

The first joint initiative of the four groups is Learn4Life, but they all believe the potential could be much greater than just working on education.

“The timing was right,” Philipp said. “The leaders wanted to work together.”

Milton Little, United Way’s CEO, said there had been cases where a couple of organizations had collaborated on a project, but never all four of metro Atlanta’s regional organizations.

“The value of this was that it wasn’t forced,” Little said. “It was voluntary.”

But the four executives also realize this is a special window that might not last. “I would hope we have a long enough tenure for each of us so it becomes institutionalized – that this is just what you do,” Hooker said. “We seem to be in an unprecedented time in history. We have so many good people in important leadership spots, and we seem to have an affinity for each other.”

Philipp said that she thinks this kind of collaboration is unique among other cities in the country.

“That’s why we need to help our boards understand this,” Hooker said. Eventually, the four groups hope to link together their staffs and boards so they can work on a collaborative impact model that would include several initiatives in addition to education.

As the Cristo Rey Atlanta Jesuit High School prepares to move to its new quarters, it is in the final stretch of a $25 million campaign. And it only has a few weeks left to raise $1.97 million so it can benefit from a challenge grant.

“Today’s number is $1,968,746 to go,” said Bill Garrett, CEO of the school. “If we secure that amount of funding, we will not only get the match of $1 million from the anonymous foundation but also will have enough funds to build the gymatorium which will serve the school for decades to come.”

At a minimum, Garrett said it will need another $1 million before early January. “We have lots of asks but not sure what will come,” Garrett said, adding that it can borrow some money to close out the campaign, but that would put pressure on the school’s operations.

Cristo Rey serves disadvantaged students, and it provides employment experience while they attend high school. The new location in downtown Atlanta will allow the Atlanta school to serve about 500 students.

Atlanta Mayor Kasim Reed honored Anna Foote, deputy director of administration of HOPE Atlanta, with the Phoenix Award at the December board meeting of Invest Atlanta. 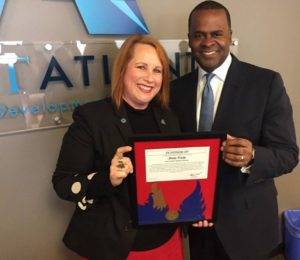 Foote served on the Invest Atlanta board for more than eight years, making her the longest consecutively serving board member in the agency’s 40-year history.

HOPE Atlanta is a 116-year nonprofit with a mission to confront the root causes of homelessness and offer a hand to promote lifelong stability.

“It is a privilege to work in nonprofits, to lift up those in need and to offer a hand to those in crises,” Foote said. “Atlanta has a generous philanthropic community and history of giving to vital causes, such as homelessness.”

HOPE Atlanta recently raised a record of nearly $400,000 at its recent dinner at The Fox Theatre.

The funds will towards HOPE Atlanta’s Supportive Services for Veterans and their Families program to help homeless veterans find rapid and affordable housing. The organization’s fundraiser was its most successful ever thanks to pre-event donations from sponsors as well as texted donations during the event.

The event honored Aaron Goldman, president and principal at Perennial Properties and co-founder of the Atlanta Real Estate Collaborative.