Two iconic Atlanta business leaders will be honored at the 2019 JA Atlanta Business Hall of Fame on Feb. 23 at the InterContinental Buckhead.

They are Rosalind “Roz” Brewer, chief operating officer and group president of Starbucks Corp. (Nasdaq: SBUX); and John F. Brock, retired CEO of Coca-Cola European Partners (NYSE: CCE).The JA Hall of Fame is one of the top recognitions highlighted in Atlanta each year. It honors people for their distinguished careers and philanthropic achievements in the Atlanta community.

Before joining Starbucks, Brewer was president and CEO of Sam’s Club, a division of Walmart Stores Inc. (NYSE: WMT). She was the first woman and first African-American to fill the role of CEO at one of Walmart Stores. 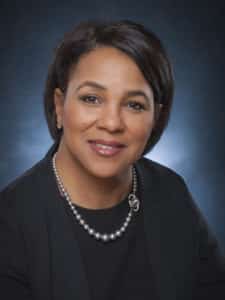 Brewer is a native of Detroit who moved to Atlanta to attend Spelman College, graduating in 1984. She joined Spelman’s board of trustees in 2006, and she now serves as chair of its board. Brewer also chaired the search for Spelman President Mary Schmidt Campbell, who joined the Historically Black College and University in 2015.

Brewer joined Walmart in 2006 as its regional vice president responsible of overseeing operations in Georgia.

Prior to joining Walmart, Brewer worked for 22 years at Kimberly-Clark Corp., where she eventually became president of the Global Nonwovens Sector in 2004. Brewer serves on the board of Lockheed Martin Corp. Fortune Magazine recently named her to its 2018 Most Powerful Women in Business list.

Before retiring as CEO of Coca-Cola European Partners in December 2016, Brock served as chairman and CEO of Coca-Enterprises from 2006 to May 2016 (when there was a merger of European bottlers).

Brock began his career with Procter & Gamble and later joined Cadbury Schweppes, serving in several executive roles, becoming its COO in 2000. From 2003 to 2006, Brock was CEO of InBev.

Currently, Brock serves on the board of Royal Caribbean Cruise Lines.

Brock also has served in multiple civic leadership roles in Atlanta, and he chairs the GT Foundation. Brock, who as a BS and MS in chemical engineering from Georgia Tech, also chaired the university’s recent capital campaign.

He also is chair of Horizons Atlanta, an organization focused on summer learning for under-served children. Brock and his son, John IV, are co-owners of Team Envy and the Dallas Fuel, which are eSports teams. His wife, Mary, also is a co-owner of the Atlanta Dream. They have three children and seven grandchildren.

A cloud overshadowed the Human Relations Award dinner of the American Jewish Committee Atlanta at the Grand Hyatt Atlanta on Oct. 30. 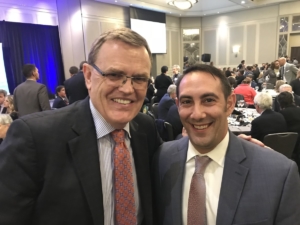 The dinner was held only a few days after 11 Jews attending the Tree of Life Synagogue in Pittsburgh were shot by an anti-Semitic gunman.

The night’s honoree – David Abney, CEO of United Parcel Service Inc. (NYSE: UPS) – addressed the shooting by mentioning the October 1958 bombing of the Temple in Atlanta – a similar anti-Semitic act.

Abney then praised the heroic stance of Rabbi Jacob Rothschild, who worked to heal the wounds of that bombing with then-Atlanta Mayor William Hartsfield.

Abney also said that Rothschild had been instrumental in making sure Atlanta properly honored civil rights leader Martin Luther King Jr. after he received the Nobel Peace Prize in 1964, by holding a banquet in early 1965 in King’s honor.

“It was the first integrated banquet in the Southeast United States,” Abney said. “That shows a lot how we can make a difference and how the world can be so much better if we cooperate and recognize the value of each other.”

Then Abney brought up the violence in the Pittsburgh synagogue shooting.

“It really makes you wonder what in the world is driving that kind of behavior,” said Abney, a native of the Mississippi Delta region who started working for UPS in 1974 loading packages on trailers, a place where he worked alongside people of different races, realizing we are more alike than we are different. Still, differences should be respected and valued, he said.

“Wouldn’t the world be a very boring place if we were all the same?” Abney asked. “I’m very fortunate to work for a company where diversity and inclusion is a core value.”

The tragic Pittsburgh shooting kept coming up as speakers spoke up for tolerance and understanding. The dinner raised nearly $500,000, according to Dov Wilker, regional director of AJC Atlanta.

Cricket Wireless, an Atlanta-based subsidiary of AT&T, made a $125,000 donation to the Atlanta Music Project, which provides intensive, tuition-free music education for underserved youth in their neighborhoods. 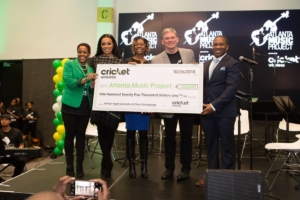 Cricket’s donation will go toward giving 100 students full scholarships to participate in the organization’s newly-launched All Star Youth Orchestra & Choir. The scholarships will provide instruments, uniforms, transportation and musical accessories permitting all students to participate at no cost to their families.

A presentation was held on Oct. 26 at the Gathering Spot where Atlanta’s own

Grammy Award winning artist Monica joined AMP’s student musicians for a special performance of her hit song, “Angel of Mine.”

“Our young musicians have worked hard at their craft for many years and have developed powerful transferable skills, including flexibility, problem-solving, confidence, creativity and how to communicate with their peers,” said Dantes Rameau, co-founder and executive director for the Atlanta Music Project. “Most importantly, it has taught them to strive for excellence. Thanks to Cricket Wireless, these scholarships will help us continue this valuable work while at the same time helping us grow our programming to serve more young people for years to come.”

The Atlanta Music Project, founded in 2010, provides more than 5,525 hours of tuition-free music education annually, and it serves 350 students through eight programs.

The Rabun Gap-Nacoochee School is naming its new dining hall the Richard and John Woodruff Dining Hall to recognize the family’s long-time support of the school. 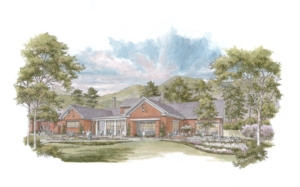 The dining hall represents the fourth generation of the Woodruff family to have supported the mission and work of Rabun Gap-Nacoochee School.

She is the namesake of Jane Woodruff Hall, the senior residence hall on campus, and a philanthropist whose thoughtful and generous gifts have helped to extend and enhance services in the areas of health care, education, and community living.

“Ms. Jane’s affection and support for Rabun Gap, combined with her strategic vision for the school, have been transformational gifts that have helped make Rabun Gap the school it is today,” Anthony Sgro, head of the school, said in a statement.

The Woodruff family ties to Rabun Gap-Nacoochee School date back to its inception. Andrew Jackson Ritchie, founder of the school, told of going door-to-door in the Atlanta neighborhood of Inman Park, where he knocked on the door of the Woodruff home.

After hearing about the amazing work the school was doing, Emily Woodruff began supporting Rabun Gap with her household money. Her husband, Ernest Woodruff, the Atlanta financier most known for the purchase of The Coca-Cola Co., soon followed, helping the school rebuild from a devastating fire in 1927.

Ernest and Emily’s two sons followed in their parents’ footsteps. And Robert W. Woodruff, head of The Coca-Cola Co., galvanized a group of Atlanta friends to meet the goal of a $400,000 endowment in 1938. Youngest son George Woodruff served as board chair of the school for three decades and led the campus through some of its most trying times.

“The Woodruff family continues to make a lasting impact on Rabun Gap-Nacoochee School,” Sgro said. “We’re excited to commemorate this legacy with the naming of our most focal building on campus – the Richard and John Woodruff Dining Hall.”