The latest act in the civic theater that is Fulton County began Thursday in a crowded room on the fourth floor of Georgia’s Capitol. 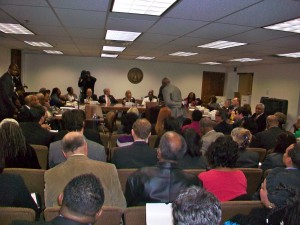 The chorus in this case could do little to relieve tension, but the 75 who gathered certainly helped establish the mood. There were few smiles among the crowd of lawyers and lobbyists, community advocates and union reps, preachers and seniors – many of whom are familiar faces at meetings of the county commission and Atlanta City Council.

Just about the only happy chorus member was a man who said he plans to be the state’s first black governor. He said he and Nathan Deal both come from humble origins, and his background trumps the governor’s because he was homeless when he arrived in Georgia in 2001.

At the meeting’s right-on-time conclusion, Rep. Lynne Riley (R-Johns Creek), who chairs the delegation, thanked everyone for coming. She promised the delegation would consider the concerns the speakers raised. 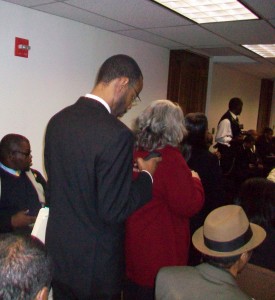 Neither Riley nor any other Fulton lawmaker gave any reason to think the three proposals submitted by Republicans will be altered. One Democratic state representative said another meeting will be scheduled to discuss the proposals. But the microphone wasn’t turned on, no one was taking notes, and Riley was exiting the room.

Next stop: A committee meeting to consider the ethics proposal introduced by House Speaker David Ralston. In a hallway after that meeting, some advocates of Common Cause of Georgia said they are optimistic the bill will be an improvement over the state’s current ethics laws.

The three proposals from the county’s Republican leadership include:

Around two dozen speakers took the podium to explain why they opposed one or more of the proposals. Most were comfortable, as this wasn’t their first rodeo, and they were pleasant and respectful – many of them thanking the delegation for allowing public comment.

Joe Beasley, a civil rights advocate, took the podium to say that he’s become blunt now that he’s 75. His comments could be described in many ways, but conciliatory wasn’t one of them.

By the time Riley gaveled him out of order, Beasley was walking away from the podium and she remarked as he walked:

“I beg to differ. We’re not going to tolerate it.”