The Atlanta Streetcar. People instantly have an opinion ─ regardless of the facts.

Some call it a boondoggle. Others say it doesn’t go where they want to go.

Inevitably the conversation will go to the $92 million cost to build the 2.7-mile loop that connects Centennial Olympic Park with the King Center through the heart of downtown Atlanta. 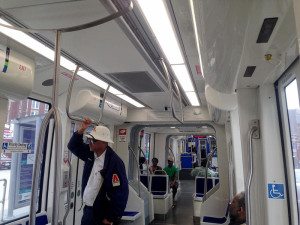 Commentator Maria Saporta wants to see the Atlanta Streetcar system expanded and sees the transit system as an asset to Atlanta.

When Atlanta Mayor Kasim Reed said the streetcar fare would be free through 2015, more grumbling followed. Won’t that even be more of a burden on taxpayers?

Hold on, folks. The Atlanta Streetcar is one of the best amenities to come to Atlanta in years. We finally are adopting a mode of transportation that increasingly is becoming the future for cities. Nearly every up-and-coming city in the country has a streetcar or is planning to build a streetcar.

Why? Because it makes economic sense.

Since the Atlanta Streetcar route was announced in 2010, there has been $840 million in new investments. And that translates into more property taxes and sales taxes being generated for the city.

The Atlanta Streetcar estimated that the $1 fare would bring in about $250,000 a year ─ and that didn’t include the cost of adding a fare collection system.

And for people who tell you no one is riding the streetcar, since it opened in December 2014, the Atlanta Streetcar has had more than 180,000 riders.

On a recent Saturday, the streetcar was so packed, it was standing-room only. Many of them were out-of-town visitors experiencing Atlanta with smiles on their faces.

The mayor said the reason the fares are remaining free is so the city can be strategic in deciding what technology to use for fare collection. That makes sense.

But keeping it free also makes sense ─ at least until the day when we have expanded our streetcar system to serve more of the city.

Let us increase the frequency of the streetcar to five minutes rather than the current 12 to 15 minutes between cars.

As we look to expand the Atlanta Streetcar, remember ─ it is not just for transportation. It’s a magnet for economic development.

And the cost to build, operate and expand the system is a bargain when one considers the economic benefits of riding streetcars into the future.