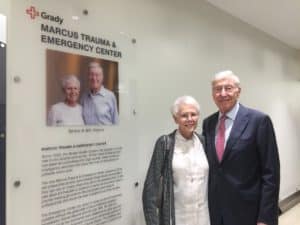 Grady Hospital dedicated the Marcus Trauma and Emergency Center on Oct. 5 in recognition of philanthropy of Billi and Bernie Marcus, a co-founder of the Home Depot.

In all, the Marcus couple have given a total of $50 million to Grady, which also went to the establishment of the Marcus Stroke and Neuroscience Center.

The biggest disappointment in Bernie Marcus’ life was when he was accepted to Harvard’s medical school, because his family could not afford the $10,000 tuition.

And he wasn’t eligible for a scholarship because Harvard had already met its 10 percent quota of Jewish students.

Marcus had to set aside his dream of becoming a doctor and settled on becoming a pharmacist.

“I could have been somebody,” Marcus joked with me at the Grady dedication ceremony.

Marcus did become somebody. After being fired from Handy Dan, a home center retailer, Marcus and his colleague, Arthur Blank, decided to launch their own chain of home improvement mega stores.

The chain, Home Depot, was founded in Atlanta in 1978 and the two became billionaires.

But Marcus never forgot his first dream – of saving lives.

He and his wife have donated generously to Marcus Autism Center, Piedmont Hospital, the Shepherd Center and to Grady Hospital.

Marcus described his missed opportunity to become a doctor as “bashert,” which is Yiddish for “destiny.”

His contributions to Grady and the dedication of the Marcus Trauma and Emergency Center has helped fulfill his destiny.

Bernie Marcus was destined to save people’s lives.