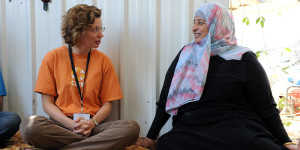 After losing her 2014 bid for the U.S. Senate, Michelle Nunn did not return to her role as CEO with the Points of Light Foundation. Instead, she was named president and CEO of CARE, an Atlanta-based international relief organization.

After six months as the president and CEO of CARE, Michelle Nunn is seeking a little help from her friends. She is hoping to engage key women leaders from Atlanta to help reduce extreme poverty around the world by focusing on the needs of women and children.

She wants them to become part of the Atlanta Women Really CARE group.

The Georgia native spoke about the issue at CARE headquarters to a crowd of business, academic and civic leaders, as well as her mother – Colleen Nunn.

Three of CARE’s regional directors – all women – attended the event to talk about their work in the Middle East, Africa and Latin America.

The global challenges are many – especially the millions of Syrian refugees who fled their war-torn homeland in what CARE’s leaders call the largest humanitarian crisis since World War II.

Nunn sees Atlanta’s potential role in what she is calling a movement for change – because it’s home to a number of leading global organizations such as CARE, the Centers for Disease Control and Prevention, the Carter Center, MAP International, MedShare, the Task Force for Global Health and Habitat for Humanity International.

Nunn said that Atlanta’s organizations can be an important part of a “greater global constellation,” and she is destined to be one of the key leaders in building Atlanta’s international profile.

In talking to Nunn, there was no sense of regret that she was not elected to the U.S. Senate.

When asked how she felt about working at CARE, Nunn said, “It’s very meaningful and inspiring to be a part of something that is so clearly saving and changing lives.”