Ten years ago, Atlanta’s Grady Hospital was facing insolvency. A group of business and civic leaders stepped in, raising hundreds of millions of dollars, to transform the aging hospital into providing best-in-class healthcare for the uninsured and underinsured.

At the Grady Health Foundation’s White Coat Gala one of the key ringleaders was recently honored – Pete Correll, retired CEO of Georgia-Pacific. 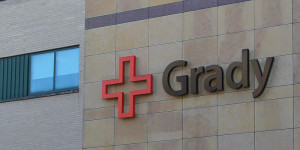 It’s a passing of the baton for Grady Hospital.  Three key business leaders who played a vital role in saving Grady are leaving the board.

Pete Correll has chaired the Grady Memorial Health Corp. board for almost a decade.  He plans to step down in September.  His other “Save Grady” colleagues – Tom Bell and Michael Russell – already made their departure.

Succeeding Correll will be Frank Blake, retired chairman of the Home Depot. Also new to the board are Carol Tomé, the Home Depot’s chief financial officer, James Dallas of Georgia-Pacific and attorney Jack Hardin.

But Correll says he’ll still be involved. He’s the future chair of the Grady Health Foundation board.

Grady has always been known for its burn unit and trauma care and now it has a leading stroke center and pre-natal care for babies born prematurely.

Nearly a decade ago, when civic leaders discussed Grady possibly going under, they knew it would have a ripple effect on all of metro Atlanta’s hospitals.

But as Grady has become stronger, so have our region’s healthcare providers.

So thank you Pete Correll, Tom Bell, Michael Russell and all the others who helped save Grady.  You saved many lives by saving the hospital.