State transportation Commissioner Keith Golden says his department is committed to the Complete Streets policy adopted by the board in September. 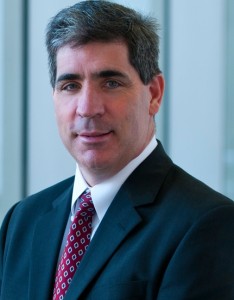 The general skepticism over GDOT’s commitment to the Complete Streets policy stems from Georgia’s perennial debates about broader transportation policy. An easy example is the toll on Ga. 400, which was slated to end when the road was paid for but was extended to pay off other roadway improvements. The toll now is scheduled to end around Thanksgiving.

Russell McMurry, the state’s chief highway engineer, said GDOT and its partners will build multi-modal components where they are appropriate. A balance must be maintained in order to include components such as bike lanes and sidewalks, he said.

“It’s not a blank check,” McMurry said of the Complete Streets policy. “It’s a balance in the context of all transportation projects that exist, or that may happen.” 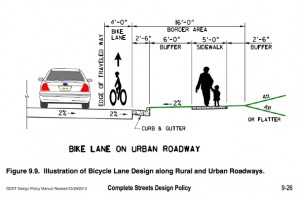 In north Fulton, the balance tipped in favor of the addition of bike lanes following an outcry from cycling enthusiasts led by Joe Seconder, a consultant who resides in Dunwoody and serves on the board of Georgia Bikes. GDOT responded by adding two bike lanes to the $10.5 million bridge to replace the bridge at Northridge Road.

The bridge over Lake Lanier and the Chattahoochee River is on Clarks Bridge Road, at the site of the 1996 Summer Olympic Games rowing events. The new $8.7 million bridge is to provide two vehicle lanes, bike lanes, sidewalks, and an adjacent tunnel through which rowers can carry their boats from one side of the road to the other.

“This project is more than a bridge for vehicles, it is a multi-modal structure, Bayne Smith, GDOT’s district engineer for northeast Georgia, said in a statement released in February. “It will provide for motor vehicle traffic, cyclists and pedestrians with the addition of bike lanes, sidewalks and a pedestrian culvert. It will benefit our community and tourists who attend events held at the Rowing Center.”

Golden emphasized that GDOT won’t use the concept of balance to kill bike and transit lanes, and sidewalks.

“We are more than willing to find the right balance,” Golden said. “We can do things to make [the policy] more relevant. 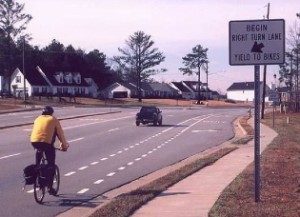 This bicycle lane in Gwinnett County, on Sugarloaf Parkway, is cited in state policy as an example of a good bike lane. Credit: GDOT Design Policy Manual

Specific provisions outline when a bike and pedestrian components will not be added. They include locations where vehicles travel under 35 mph; on side road tie-ins where there’s no existing sidewalk or bike lane and adding them would add more than 20 percent to the project’s cost; and in certain rural situations.

The new chapter in Georgia’s Design Policy Manual begins with a clear statement of intent to build complete streets. The overview of the policy begins:

The state’s transportation design manual does require that all projects be designed so that in the future provisions for pedestrians and bicyclists can be added. The policy also requires that any negative impact on alternative modes of transportation be recorded in the official project documents:

The board that oversees the Georgia Department of Transportation adopted a complete streets program that now is detailed in a 27-page section in the state’s Design Policy Manual. Fifteen contributing agencies are acknowledged, including the Atlanta Regional Commission, Smart Growth America, PEDS and the Atlanta Bicycle Coalition.

Specific examples are cited in the street design manuals used by governments in Atlanta, Gainesville, Gwinnet County and Charlotte.