Calls to remove Confederate memorials in Atlanta coincide with a June 12 court order for the removal of the Confederate obelisk in Decatur. A similar debate – in 1870 – kept such a monument out of Five Points and in placed, instead, in Oakland Cemetery. 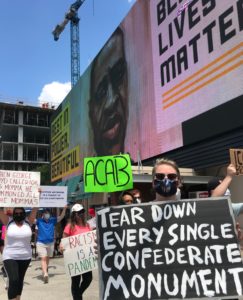 The call to remove Confederate monuments has grown from initial protests over the death of George Floyd while in custody of the Minneapolis Police Department, as seen in this June 13 demonstration. Credit: Kelly Jordan

The revived attention to Confederate memorials in Atlanta has renewed interest in the 10 recommendations issued in a 2017 report by the Advisory Committee on City of Atlanta Street Names and Monuments Associated with the Confederacy. Mayor Kasim Reed and the Atlanta City Council established the committee after the deadly confrontations in Charlottesville, Va. over the planned removal of a statue of Robert E. Lee, the Confederacy’s top general.

The primary outcome of the committee’s report was the renaming, in November 2018, of Confederate and East Confederate avenues to United Avenue. The committee was co-chaired by Sheffield Hale, president and CEO of the Atlanta History Center, and Derrick Kayongo, CEO of the Center for Civil and Human Rights.

Last week, DeKalb County was ordered to remove the Confederate obelisk from the grounds of the courthouse no later than 11:59 p.m., June 26. DeKalb County Superior Court Judge Clarence Seeliger issued the order June 12 in response to a motion filed by Decatur. The city contended the monument had become a public nuisance, as defined by state law. Decatur’s top elected officials were cited in a June 12 statement: 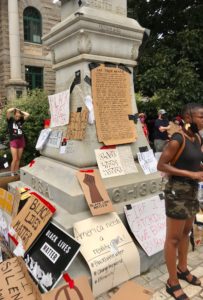 DeKalb County must remove this Confederate obelisk on the courthouse square no later thanb the last minute of June 26, DeKalb County Superior Court Judge Clarence Seeliger has ruled. A removal date, 2020, is written in marker at the top of the podium. Credit: Kelly Jordan

Seeliger observed in his order that public safety at the site – including the removal process – shall be secured by the county sheriff’s and police departments, which are to support the city’s police department: 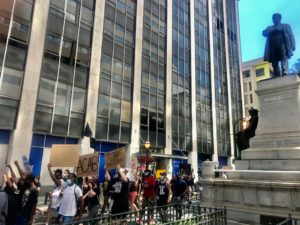 Henry W. Grady was known as the ‘Spokesman of the New South’ in the 1870s and 1880s. The call for removing the Grady statue, in Downtown Atlanta, is based on Grady’s white supremacist views. Credit: Kelly Jordan

In 1870 in  Atlanta, the debate similar to the one in Decatur involved the Confederate obelisk in Atlanta’s city-owned Oakland Cemetery. The wife of Confederate Gen. John B. Gordon lost her bid to have the obelisk placed in a high profile place, such as Five Points. Mrs. Gordon resigned in protest as president of the group that funded the memorial, the Atlanta Ladies Memorial Assoc., according to the committee’s 2017 report.

Of note, Gordon is honored with a statue on the grounds of the Georgia Capitol. Current protests have renewed long-standing discussions over its fate. The Georgia General Assembly and Gov. Brian Kemp approved additional protections for such monuments in legislation that became law in 2019.

The obelisks in Decatur and Atlanta have different lineage that the Atlanta committee has used to distinguish Confederate memorials. 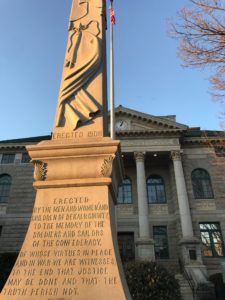 The Confederate obelisk at DeKalb County’s courthouse was erected in the height of the Jim Crow era and commended ‘soldiers and sailors’ of the Confederacy. Credit: Kelly Jordan

The obelisk in Decatur was erected in 1908, in the heart of the Jim Crow movement (1890-1930s). Monuments erected in this era, according to the committee report, “misconstrues the cause of the Civil War by denying slavery as the principal cause of the war. Instead, the Lost Cause portrays the Civil War as a struggle caused by Northern aggression and a Southern desire to defend their homeland and states’ rights.”

These types of memorials were located in high traffic areas where their message reached the broadest audience possible, which the report named as, “public squares, courthouses, and institutions of higher education.”

The obelisk in Oakland Cemetery was erected in 1873, in what the report calls the Post Civil War Era (1866-1889). Many such monuments were raised by women’s groups as they established cemeteries, and were installed, “principally to mourn the dead.” The women’s groups relocated remains of Confederate fallen at a time, the report says, that: “Union soldiers were moved by the federal government to national cemeteries for re-interment, Confederate soldiers were not. Instead, ladies memorial associations in the South developed Confederate cemeteries.” 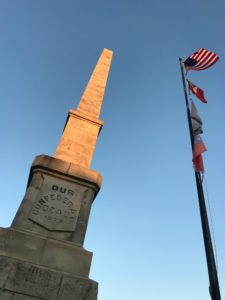 Atlanta’s city-owned Oakland Cemetery has this Confederate obelisk, which was installed for the purpose of honoring the dead, not fueling the Jim Crow movement, according to a report by an Atlanta advisory council. Credit: Kelly Jordan

Memorials in this era were located in cemeteries and that’s what happened with the statue at Oakland Cemetery – despite arguments to put it in Atlanta’s most significant intersection, according to the report:

The committee’s final report was delivered Nov. 20, 2017, the final days of  Reed’s administration and the term of Ceasar Mitchell as president of the Atlanta City Council. The committee was comprised of 11 members; six were appointed by the mayor and five by the council. Members represented community groups, business leaders and historians, according to the report.