A new wrinkle emerged Thursday in the tense discussion about the fate of Fort McPherson – the contents of the confidential business plan that is to guide the fort’s conversion to civilian use.

The business plan is emerging as a contention because it has guided the redevelopment plan a state authority has approved for the fort’s land.

Over the past month, the redevelopment plan has come under fire from a non-profit group – Georgia Stand Up – that raises questions about whether the current plan will help or hurt the surrounding community.

Suddenly, the business plan that envisions construction of a biotech research facility near the center of the property is at the center of debate over how best to reuse a 488-acre site that the military is abandoning after more than 120 years.

Former Atlanta Planning Commissioner Michael Dobbins contends that such a facility likely will not be built in the foreseeable future. He suggests that neither the public nor private sectors has the resources to build and operate it.

Dobbins said the business plan should be made public, in part to facilitate a reasonable discussion over how best to proceed with planning for land use on the current fort. For example, perhaps the better approach is to craft plans that with more immediate promise of becoming reality, he said.

Dobbins now teaches at Georgia Tech, and his research into Fort McPherson’s conversion has been funded by Georgia Stand Up through a contract with Tech.

Jack Sprott, executive director of the state authority, said the business plan is evolving in consultation with the Army. He indicated that it will be made public only after the Army approves it.

“I have a fully prepared economic development application,” Sprott said. “It includes a business plan and all the elements needed for an EDC [economic development conveyance, in which the military authorizes disposal of property for less than fair market value].

“It needs to be tweaked because I don’t want to submit something cold to the Army and get a ‘No’,” Sprott said. “You get that first ‘No’ and you have a lot of work to do to get back to a ‘Yes’.”

The proposed biotech center is a sticking point in part because of its proposed location.

As such, it is becoming emblematic of the different approaches to planning for the fort’s eventual redevelopment and how well that redevelopment fits into the community.

The state authority was instructed to plan for the reuse of land within the confines of the fort’s walls.

Georgia Stand Up wants to consider a redevelopment plan for the fort’s property – as well create a plan that extends slightly into adjacent neighborhoods.

The state authority has approved a redevelopment plan that places the research facility more than a quarter-mile from either of two MARTA rail stations. They are located at either end of the fort.

In this plan, the facility is almost centrally located within the confines of the fort’s property.

Dobbins suggests that much of the future development be concentrated around the MARTA stations. The idea of such density is to encourage people to travel by train or bus to the station and walk to and from their homes or places of works, he said.

Atlanta Councilwoman Joyce Sheperd is facilitating many of these discussions about the fort’s future, including Thursday’s meeting of the Community Engagement Subcommittee of the Fort McPherson Implementing Redevelopment Authority.

Sheperd said she will provide an appropriate amount of time to come up with a plan that addresses a myriad of concerns.

“We’re not going to do anything with this until we’re at the same page,” Sheperd said. 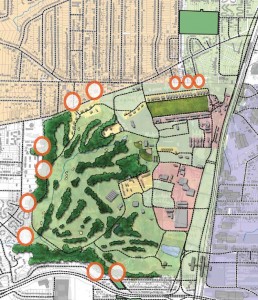 The authorized redevelopment plan for Fort McPherson covers only the fort itself. This is another plan, commissioned by Georgia Stand Up, and circles show sites where the fort could connect to the neighborhood. Credit: Georgia Stand Up.