Now that Congress has approved federal funding for the deepening of the Savannah Harbor, construction is expected to begin this autumn. 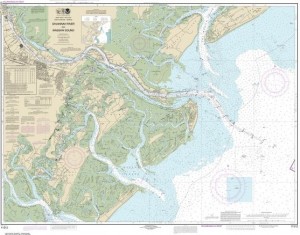 Congress has approved funding to deepen the Savannah Harbor. Click on the image for a larger view or go to www.charts.noaa.gov/OnLineViewer/11512.shtml. Credit: NOAA

The Georgia Ports Authority said Thursday the first construction projects are to include: dredging the Savannah channel entrance seven miles farther into the Atlantic Ocean; recovering the CSS Georgia ironclad warship; and mitigation features including a freshwater storage facility for Savannah.

Incidentally, Congress did not give Savannah an exclusive on a harbor-deepening project. Similar projects were approved for Boston and Jacksonville, Fla., enabling all of three ports to handle the bigger ships expected to visit the East Coast once the expanded Panama Canal opens next year, if the current construction schedule is maintained.

Boston’s harbor and the federal channel to Jacksonville, Fla. are to be deepened to 47 feet, according to project descriptions posted by bostonglobe.com and jaxport.com. Savannah’s harbor is to be taken to 47 feet.

Georgia officials expect to pass the first milestone of this new phase within 90 days – the signing of financial agreements between the state and federal governments. The clock on this deadline starts ticking when President Obama signs the $12.3 billion water bill Congress sent him on Thursday. 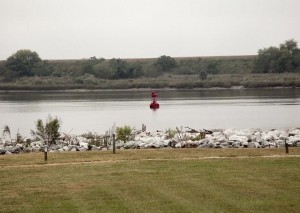 The red buoy marks the site of the CSS Georgia, located near Fort Jackson. Credit: civilwaralbum.com

Ports officials expect to begin construction by using the $266 million in state funding already provided for the project. The money spent will be applied to the state’s total share of the project once federal funding begins.

One significant benefit of the federal legislation for the Savannah project is that it lifts a spending limit set in 1999. Both state and federal funds will be able to flow to the project. Georgia has approved $266 million in bonds for the project.

In Georgia, officials who worked on this final effort to gain federal funds expressed optimism because Congress provided the funding, and hope that freight-laden ships will prove to be an economic benefit.