The vagaries of the global shipping trade are again poised to affect Atlanta’s second major trade port, the seaport in Savannah. 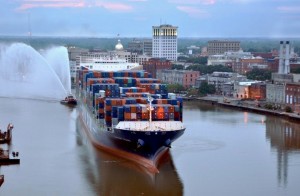 A fire boat sprays water in 2010 to celebrate the arrival of the largest freighter ever to arrive at the port of Savannah. Credit: U.S. Army Corps of Engineers

Last month, the concern was construction delays at the Panama Canal. This month, it’s the question of how the Savannah port will factor into a proposed alliance of shipping companies that would control up to 40 percent of the world’s major oceanic transport.

All these events are routine business ventures compared to the state’s decision on how to proceed with the deepening of the Savannah harbor – despite the decision by the Obama White House not to provide federal funding for the project.

The planned alliance of three shipping companies could end up making Savannah’s port busier than it is today. It all depends on the outcome of the proposed alliance that won approval March 20 from the U.S. Federal Maritime Commission chooses to process cargo through Savannah.

The alliance, named P3, still needs approvals from European and Chinese regulators, but the stiffest battle was in the U.S., according to a report in wsj.com.

The new alliance involves the world’s three largest container shippers, measured by capacity, according to wsj.com. 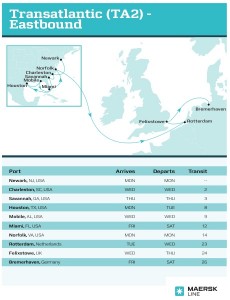 Click on the image to see a larger version of just one trade route that calls on Savannah. Credit: Maersk Line

One of those shipping lines, the Maersk Line, is a major presence at the Savannah port. Maersk signed a 20-year contract with the Georgia Ports Authority in 2006 to make Savannah one of its primary ports in the southeast United States. In 2006, Maersk added service from Savannah to the eastern Mediterranean.

A ship operated by another alliance member, France-based CMA-CGM, was the largest ever to have entered the Savannah habor when it came up the Savannah River in 2010, accompanied by a fire boat spraying water to mark the occasion. The third line in the alliance is Swiss-based Mediterranean Shipping Co.

The story in wsj.com may have underplayed Savannah’s potential role for the new triumverate. The story cited only three eastern ports as ones the alliance will serve, “on some of the world’s biggest trade loops,” including Newark, Norfolk and Baltimore.

The story did not observe that Savannah is the fourth busiest U.S. port for handling containers – the trailers that can be transferred direct from ship to truck or train – that are the transport mode favored by the new alliance.

In another issue related to consolidation in the oceanic shipping business, Savannah received good news in late February from its shipping partners.

The G6 alliance of shipping companies announced Savannah will be one of its ports of call, according to the trade publication seanews.com. The G6 started service in 2012 for the Asia/Europe/Mediterranean trade and expanded to the U.S. east coast in May 2013.

The proposed services remain subject to regulatory approval. The tentative routes do show the extent of trans-Atlanta/trans-Pacific connections available through the Savannah port.

The three routes that seanews.com has reported would serve Savannah include this exotic-sounding array of global trade centers:

Savannah’s reputation in metro Atlanta as the region’s hometown seaport has escalated in recent years.

A leading reason for the new recognition is the much-touted relation between Gov. Nathan Deal and Atlanta Mayor Kasim Reed to win federal funding for the deepening of the Savannah harbor to handle bigger ships expected to transit the bigger Panama Canal.
In addition, the Georgia Ports Authority has provided numerous materials to metro Atlanta business and civic leaders that show the economic benefits for  metro Atlanta provided by Georgia’s ports.