The $266 million that Georgia is setting aside for the planned deepening of the Savannah harbor is being protected by a proposed financial bailout of the Panama Canal expansion project. 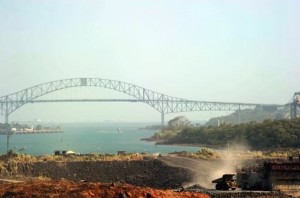 Cost overruns for the expansion of the Panama Canal have contributed to a work stoppage and now a work slow down, including this job site at Cocoli, near Panama City, on Feb. 21. Credit: Rodrigo Arangua, AFP

The Savannah project is based on the premise that Savannah needs a deeper harbor to handle the bigger ships expected to transit the bigger Panama Canal. However, work on the canal resumed just last week – and only on a limited basis – after a two-week stoppage because of disagreement over $1.6 billion in cost overruns.

The entire budget for the canal’s expansion is $5.25 billion. The total cost now is forecast at nearly $7 billion, which is an increase of more than 30 percent above original projections.

The Panama Canal Authority and a Spanish-led joint venture have agreed to terms to resume a limited amount of work on the canal, according to reuters.com.

The tentative deal was announced Feb. 27. The agreement has yet to be signed and awaits a process of international arbitration before final terms can be reached.

Here in the U.S., hopes are high that the bigger canal will increase global trade, and the resulting economic development. Shipping interests along the gulf and east coasts have great hopes for the project.

For example, the booming LNG market is watching the canal project closely. The canal now is too small to handle the ships that transport liquefied natural gas from the U.S. gulf coast to Asia. The bigger canal will offer a more efficient shipping route, according to a report cited in marketwatch.com. 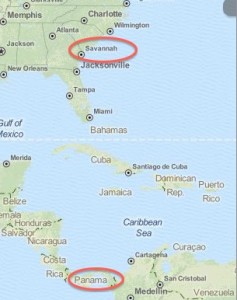 The Panama Canal is about 3,500 miles south of Savannah. Credit: mapquest.com

All these events have become the topic of routine conversation in metro Atlanta., where local officials seem to view the Savannah port as an annex of this region’s warehouse/distribution centers.

In 2012, the CEO of the Panama Canal Authority told an audience in Atlanta of the need for the U.S. to modernize its freight handling system. CEO Alberto Aleman Zubieta said the real question in the U.S. isn’t whether to deepen harbors to be able to serve post-Panamax ships – he said all should be deepened. Zubieta said the real question is whether the ports will have the rail and highway systems needed to accommodate the increased freight.

Meanwhile, in Georgia, state lawmakers are expected to approve within weeks the $35 million funding request Gov. Nathan Deal included for the Savannah harbor deepening project. The proposed allocation is in the state budget for the fiscal year beginning July 1.

This $35 million appropriation would bring Georgia’s total funding commitment to the project to $266 million. This sum represents 40 percent of the project’s cost. The federal government is expected to provide the remaining amount.

Supporters of the Savannah deepening project often talk as if construction could begin almost any day. Some top backers have suggested that work begin with just the Georgia portion of funding committed to the project. Others suggest the federal government could commit to its share of funding no later than April 1, as part of a broader federal spending bill.

All the plans to expand Savannah’s capacity are premised upon a wider Panama Canal, a construction projects that’s outside the hands of the even the federal government, and more than 3,500 miles south of Savannah.

However, doubt has circled the capacity of the Spanish-led consortium to finish the canal project on time and on budget, ever since the contract was awarded in 2009, according to reuters.com.

The winning bid was $1 billion lower than the closest competitor, Reuters reported.

The canal’s clock is ticking toward zero hour.

The 12 massive lock gates now in Italy are due to arrive at the canal in December. A significant amount of preparation remains to be completed before the docks can be installed. Then, presumably, the locks must be tested before they are opened for business by December 2015.

Previous Article
As water becomes more precious, a battle for control of the faucet
Next Article
Saving trees should be top priority in building the SW BeltLine corridor