Cost of transportation sales tax campaign on par with some for president, U.S. Senate, Ga. governor

The cost of two recent campaigns illustrates the stunning amount of money that advocates of the proposed transportation sales tax have raised, and spent, to educate and influence voters. The political battle culminates Tuesday. 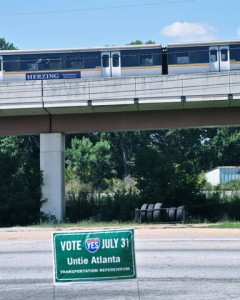 A campaign with a budget in excess of $8.5 million urged passage of a 1 percent sales tax for transportation. Credit: Donita Newton

One-time Republican presidential hopeful Michelle Bachmann ran her entire campaign with about the same amount of contributions that has been raised for the campaign for metro Atlanta’s transportation sales tax.

When Jim Martin pushed Saxby Chambliss into a runoff in the 2008 campaign for U.S. Senate, Martin spent about $1 million less than the sum that’s been spent to wage the sales tax campaign in just 10 of Georgia’s 159 counties.

The amount of campaign contributions for the transportation tax campaign shows that, despite the lingering recession, metro Atlanta’s business community has stepped up. It has risen to the challenge of funding a campaign that really has been going on since then-Gov. Sonny Perdue signed House Bill 277 on June 2, 2010.

More money has been raised for the campaign for the transportation sales tax in metro Atlanta than for the eight seats in the U.S. Congress that are on the ballot today across the 10 county region. Those races have generated a total of about $7.3 million in net receipts, according to the Federal Elections Commission.

The legislation signed by Gov. Perdue, formally named the Transportation Investment Act of 2010, called a referendum on July 31, 2012 on a proposed 1 percent sales tax for transportation. State legislators left it to politicians in each of Georgia’s 12 special districts to determine the list of projects for their areas. 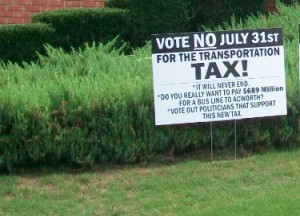 Some homeowners printed their own yard signs to urge passersby to vote against the proposed transportation sales tax. Credit: David Pendered

Two years after that historic vote to regionalize some transportation funding in Georgia, it is interesting to consider the size of the war chest that’s been raised for the sales tax in metro Atlanta and compare it to some other high profile campaigns.

Start with the 2012 race for president.

Georgians have kicked in a total of $10.6 million for all the candidates, according to the Federal Election Commission.

That’s close to the $6.5 million that the sales tax advocates in metro Atlanta expect to have in hand by July 31. Sales tax advocates say they’ve raised an additional sum of more than $2 for the educational campaign.

Martin went on to spend a total of $7.5 million in a losing bid against Chambliss, who spent $15.7 million to keep his seat, according to the FEC.

Gov. Nathan Deal faced a slew of primary candidates on his way to meet Roy Barnes in the 2010 general election.

Deal’s campaign spent a total of $8.3 million. That’s a few hundred thousand dollars less than the expected cost of the transportation sales tax in 10 metro counties.

Barnes spent $8.9 million, according to the final 2010 disclosure each candidate filed with the state Campaign Finance Commission.

The Minnesota Republican has raised about $8.2 million through June 30, a figure that includes both her presidential and Congressional reelection campaigns. Georgians have contributed about $42,000, according to the Federal Election Commission.