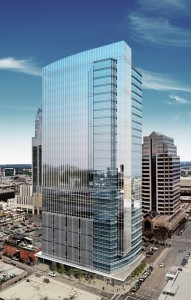 This rendering shows the 29-story office tower that Cousins Properties is developing in Austin. The architect, Duda/Paine Architects, of Durham, N.C., won an award for another tower in Austin built by Cousins. Credit: Cousins Properties, Inc.

Cousins is a bellwether Atlanta real estate firm that has said it intends to reduce the proportion of Atlanta properties in its portfolio. Evidently, Texas is a favorite locale, as Cousins purchased an office tower in Austin this year with a portion of the $165 million it raised in an April 12 stock sale.

Two tenants have committed to the new building – a 371,000-square-foot, class A structure designed by the same firm based in Durham, N.C. that is designing a second tower for Cox Enterprises. The cost of the new building was not released.

The design firm, Duda/Paine Architects, won an award for another Cousins building it designed in Austin, according to the firm’s website.

That structure was the Frost Bank Tower, which opened in 2003 and was the most recent high-rise built in downtown Austin, according to a statement Cousins released. The Excellence Award that Duda/Paine received for the bank tower was presented by Downtown Austin Alliance, the city’s counterpart of Central Atlanta Progress.

Larry Gellerstedt, Cousins’ president and CEO, was upbeat about the future of the building as well as the Austin real estate market in a prepared statement:

Austin is a bright spot in the nation’s economic recovery.

President Obama visited Austin in May, making it the first stop on his series of one-day trips intended to draw attention to successful programs that are spurring the economy. 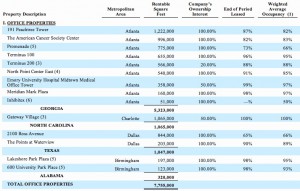 Last week in Austin, the Austin Chamber of Commerce hosted its third annual international awards event to recognize the contributions of international firms to the local economy.

“In 2012, the Austin region had 134 international delegations visit the city to pursue business opportunities with local companies,” Dave Porter, the chamber’s senior vice president of economic development, said in a statement. “From 2006 to 2011, 53 foreign companies have invested more than $8 billion in Central Texas via 59 new projects that created over 5,000 jobs.”

DuBois, Bryant & Campbell specializes in real estate, construction, corporate and securities, and other business related fields of law, according to its website.

Scott, Douglass & McConnico specializes in oil and gas, civil litigation, representing clients before governments, and employment law, according to its website.