Treatments of the coronovirus are emerging from two groups in metro Atlanta – a drug that Emory University is helping to create; and a nationwide survey of doctors that shows a majority would prescribe to their family members a malaria drug cited by President Trump.

News about the progress with the drug, to be administered in a pill, was published Monday a report in the journal Science Translational Medicine. Emory last month sought contributions from metro Atlanta corporate community to fund human testing of a pill to treat the virus. 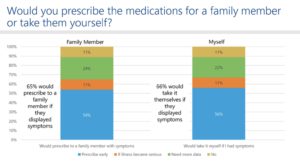 A majority of doctors would prescribe an anti-malarial drug to a relative or themselves if they displayed symptoms of COVID-19, according to a recent survey by the physician staffing firm Jackson & Coker. Credit: Jackson & Coker

The survey, released Wednesday by the physician staffing firm Jackson & Coker, based in Alpharetta, involved 1,271 doctors in all 50 states. Results showed 65 percent of doctors said they would prescribe to a family member the drug chloroquine or hydroxychloroquine to treat or prevent COVID-19. Eleven percent of doctors said they would not take either drug to combat COVID-19.

Clinical trials of the new drug are expected to begin later this Spring and the drug could halt a reemergence of COVID-19, according to a report in the journal, Drug Target Review. A reemergence is a major concern that weighs heavily in the world’s eventual effort to stand down from efforts to halt the spread of the coronavirus,

The report in Drug Target Review is more accessible to lay readers. Referring to the drug, described as a “broad spectrum oral antiviral EIDD-2801,” the report observes the drug shows signs that it can prevent COVID-19, as well as treat the disease:

Quotes in the report that describe the apparent break-through nature of the drug include: 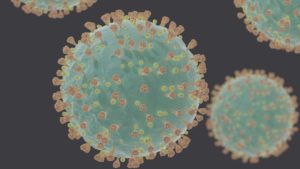 An Emory researcher is quoted as explaining a technical detail of the drug – it is a combination of two treatments.

The anti-malaria drugs received emergency approval last week from the federal Food and Drug Administration to treat maladies not listed on the label. One of those off-label uses is to treat the virus that causes COVID-19.

Highlights of the survey show:

Jackson & Coker said it conducted the survey of 1,271 physicians from 50 states from April 4 to April 7. The survey has a margin of error of +/- 3 percent, with a 95 percent confidence level of the doctors surveyed. The company said its motive is, “not to influence the debate in treating patients with anti-malarials but to make sure the voice of physicians is represented.”