When the sun sets in Atlanta these days, it’s more common than ever to hear the mysterious yip-yip-yipping of the newest top predator in town. 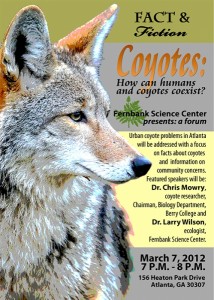 A biologist's recent presentation on coyotes brought the animals out of the shadows.

For those who link the ki-yotes’ plaintive howl to the romance of an old Western —  the distant soundtrack as the cowpokes tell stories around the campfire – forget all that.

Coyotes’ story in urban Atlanta is about pests, pets and prevention.

Last week, Dr. Chris Mowry, a biologist from north Georgia who has studied coyotes, described their gritty survival skills to a crowd gathered at Fernbank Science Center for a forum titled, “How can humans and coyotes co-exist?”

The coyote population in metro Atlanta has not been formally counted, but it is anecdotally growing, according to wildlife watchers and bereft cat owners. The most common victim of coyotes, apparently, is Fluffy out for some fresh air.

Cats, rats and random vegetation (including watermelon) – all of these food sources that help coyotes rapidly adapt and multiply. For today’s America, coyotes could replace the bald eagle as a contemporary national symbol. Like many of us, coyotes have been displaced and typically turn to their family members for support as they try to get re-established. To survive they do whatever they must.

“A dead deer on the side of the road can feed a coyote for a long time,” said Dr. Larry Wilson, a Fernbank Science Center ecologist. “A rat is like a Big Mac to a coyote.” 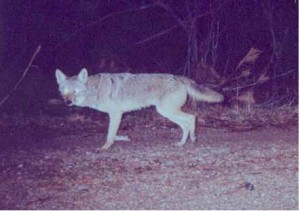 Coyotes are most active at night, and this one was photographed in Georgia by a remote camera trap. (Coyote photos supplied by Chris Mowry)

Coyotes can subsist on berries from monkey grass, but they prefer full bowls of food (don’t we all?) and an available water source (note to those who live near creeks). If you’re feeding stray cats outside, and the cats stop showing up, that’s probably a coyote moving from cat food to …. the cat.

For a coyote, life is appetite. When food is at stake, they can be aggressive. They will scale privacy fences or dig under them, for instances. They can knock over “Herbie Curbie” trash cans, which should be bungee-corded shut. Mowry and Wilson had not heard about any recent cases of rabid coyotes, but did not rule out the possibility, either.

Keeping these scavengers in the shadows may require significant changes in what Atlantans leave outdoors – including compost piles and bird feeders.

When Mowry and Wilson suggested cats go outdoors only on leashes – as required by local laws – many people in the crowd scoffed. 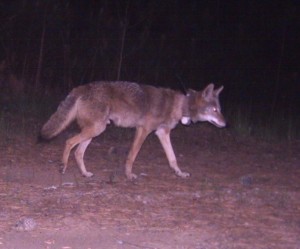 Coyotes multiply at rapid rates, and trapping won't stop their incursion into metro Atlanta, some local experts say. A coyote with a radio collar is tracked by researchers from Berry College in north Georgia.

“It’s a hard thing to do, but that’s the problem,” said Mowry, chair of the Berry College biology department, who began researching coyotes in 2005. “You don’t want coyotes to get hooked on what is not their natural food source. If they overcome their natural fear of humans, they become more problematic.”

“If we romanticize coyotes, and we don’t send a signal that they are not wanted, they will be more of a nuisance than we want to deal with,” Wilson added. “When you are the apex predator, what controls your behavior is your food source.”

Trapping a coyote, they said, is about as useful as trapping a rabbit. Others will show up as quickly as you can say Whack-a-Yote. Americans (mostly the government) spend $10 million on “livestock protection,” which includes the extermination of 75,000 coyotes a year.

“Killing them doesn’t solve the problem,” he said. “It’s better to deal with the source… if we are scared into doing something that will be terribly expensive for us, the result is not going to make us happy. Getting rid of them like that is not going to be easy or economical.” 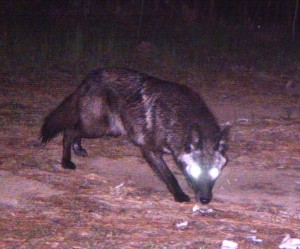 Coyotes have become more populous in metro Atlanta, probably because of available food sources such as pet food, road kill and the smaller animals drawn to those sources.

“I’ve lived in Atlanta since 1964, and when I worked for the U.S. Forest Service, coyotes were reported in every county in Georgia,” Wilson said. “As urban areas have encroached on them, the coyotes have expanded their range. They’re not new – they’ve been here the whole time.”

Atlanta’s easy pickings draw more coyotes who, in turn, produce lots of coyote babies. Their litter size is determined by availability of food.

“A male and female can mate for life,” Mowry added. “They are seasonal breeders, and now is the time they are about to give birth – late March to May. They can be reproductively active before they turn one, and they are prolific breeders… with litter sizes up to 12 pups, if there is available food.” 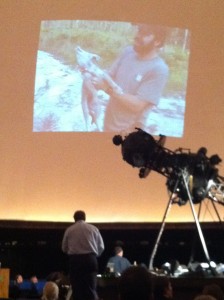 In a Fernbank Science Center slide show last week, a researcher holds a young coyote. Coyotes are fitted with radio collars that track their location and help scientists study their behavior.

Mowry spoke under the darkened dome of the Fernbank Science Center planetarium, a setting that fit the subject. As images of coyotes projected onto the sky-like ceiling, their night-time hunting and communicating also came into focus.

These critters jabber. What sounds like a pack of monkeys in a forest is usually only two or three coyotes, Mowry said.

“What you’re hearing from them at night is, ‘Hey Joe, I’m over here,’ or, ‘Hey Joe, don’t come over here,’” Mowry said. “Those vocalizations help maintain their territories.”

They are also spreading the word about available food, some of which we want them to eat – rats, in particular.

The most worrisome behavior is a coyote active in daylight. “They are very wary animals, and once they overcome the fear of humans, there is something wrong,” Mowry said. If you see a coyote approaching in daytime, he suggested using pepper spray, making noise or throwing something at them.

In such a scenario, one person asked, are leashed dogs safe?

“A small dog could be eaten, but a domestic dog could eat a coyote too,” Wilson said. “It depends on who is bigger.”

That answer suggests a follow-up forum: “How can dogs and coyotes co-exist?” If we ever get to that point, these creatures will have truly infiltrated Atlanta.

In the meantime, keep Kitty inside and your trash cans closed, and that yipping should recede into the dark night.

Michelle Hiskey is a freelance writer and writing coach based in Decatur, and her day job is senior editor on Emory University's development communications team. Michelle worked at The Atlanta Journal-Constitution for 22 years as a sports reporter, columnist and Sunday feature writer, and her stories of recovery and redemption bridge unexpected places and people across Atlanta. She lives in Decatur with her husband Ben Smith, also a journalist, and their two awesome daughters. She can be reached at [email protected].com.