As organizers and board members of Decatur’s Beacon Hill Black Alliance for Human Rights, we are grateful for all we have learned from our movement-building work over the last year. We believe we are creating an organizing model other communities can replicate. 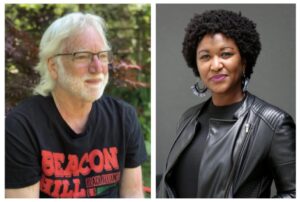 The Beacon Hill Black Alliance for Human Rights “empowers, advocates, educates, and organizes primarily people of African descent affected by systemic racism and oppression on issues of equity in education, housing, and the legal system in the city of Decatur and surrounding communities.”

Initially, our committee was named the Confederate Monument Removal Committee. As our organizing progressed, it became apparent that our work was not only to remove symbols of white supremacy, but to provide community education about how the artifacts came to be erected and what allowed them to continue to stand for more than 100 years. This was affirmed for us because many community members told us they knew so little about the existence and significance of these symbols. This lack of knowledge helped support the symbols’ continuing presence. 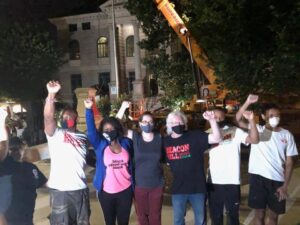 The Beacon Hill Black Alliance for Human Rights campaigned nearly three years for the removal of the Confederate memorial from the Decatur Square before celebrating the night it was taken away, on June 18, 2020. Credit: facebook.com/beaconhillblackalliance

We knew then we had to focus on decolonizing minds. When individuals are surrounded by symbols of their own oppression, they become desensitized to their impact. The psychological numbing created keeps us from asking questions that can lead to system change. When our government officials want change but lack awareness, they perpetuate the system through policies. When our community members lack awareness, they innocently walk past artifacts that celebrate the genocide and enslavement of a race or nation of people. It means they permit their children to play on the cannon from the 1836 “Indian Wars” in our city square. This led us to change our name to the Decolonize Decatur Committee, in February 2021.

We drew a connection from the “genocide” cannon, used in the Creek Indian War of 1836, to the Confederate monument, recognizing that the stories of Indigenous Nations and formerly enslaved Africans were intricately connected. The land we occupy had to first be stolen. Africans were then stolen from the continent to work the plantations. The wealth created built this country. As a function of settler colonialism, it makes sense that the cannon (1906) and the Lost Cause monument (1908) were placed by the same group, the United Daughters of the Confederacy. These symbols of hate provide a one-sided version of history and the ideas they promote are an example of the many “isms” and phobias (racism, sexism, homophobia, xenophobia) we confront today.

The logo of the Beacon Bill Black Alliance for Human Rights incorporates the colors of the Pan African flag. Credit: facebook.com/beaconhillblackalliance

If symbols of white supremacy have a psychological impact, affirmative images are just as powerful. We believe there is power in imagery. We know this from the marketing campaigns our capitalist system profits from. I, Fonta, as a 44-year-old Black woman born in the South with African roots and as a psychotherapist, couldn’t continue doing this work having not seen images that affirmed my Blackness. This led us to create the Art for the People project. AFP is my vision of a response to these oppressive symbols. There is a different energy generated to curate this project and erect these new images. This energy is liberating and much different from the energy to take down symbols of hate. It operates through the language of art speaking to both the young and the old.

This project invites the entire community, particularly those who identify as anti-racists, into a dialogue about what that means in practice. The physical structure, which hails Afrofuturism, will stand as a point of pride for Black girls like me. While some of us don’t need an entity to tell us who we are, seeing a reflection of yourself and your community’s greatness can enliven your spirit to continue to resist.

Another important lesson we learned from the monument removal was to be persistent. Over an almost three-year period we engaged in a wide variety of tactics including circulating a petition, holding press conferences and rallies, sending emails and making phone calls to elected representatives, and publishing letters and articles. Our objective was to keep the issue visible. We believe DeKalb County Superior Court Judge Clarence Seeliger’s ruling on June 12, 2020 “to immediately relocate the Obelisk” was in response to not only our years of organizing, but also to the wave of protests that swept the country after the murder of George Floyd a few weeks prior, on May 25. When an historic moment like last summer’s Rebellion happened, we were in position to secure a people’s victory. 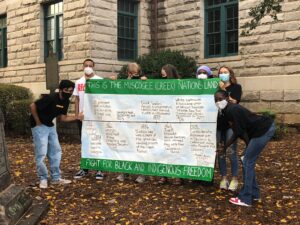 Decatur High School students gathered at the Decatur Square on Oct. 11, 2020 to raise awareness of Indigenous People’s Day and call for removal of a cannon used in the Creek Indian War of 1836. Credit: facebook.com/beaconhillblackalliance

As the Decolonize Decatur Committee’s work progressed into 2020 with the widespread support of the Black Lives Matter movement throughout the country, we felt the impact on our work. Where there was once resistance from certain community members or sectors to publicly declare that they stood with us, we now had an outpouring of groups and individuals willing to stand with us in press conferences or rallies. This included historians, clergy, students, and small businesses.

History should retell facts passed down through stories from different perspectives. Because that has not been the case often enough in our largely white, male-dominated society, the Decolonize Decatur Committee’s mission becomes essential. Finally, our critical work to elevate youth organizers and stand beside them as they lead is in the organizing tradition of Ella Baker. Following in the steps of their ancestors, young people create a new history through a reimagining that youth affords them combined with the energy to build a new system that can liberate all of us.