Walter Jones, Jr. did all the right things in college and he’s still looking for a full-time job. 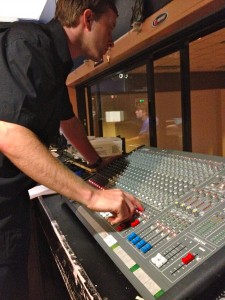 Walter Jones, Jr. is pursuing his dream of working in the audiovisual field even though he is in the Gen Y generation that faces a challenging economy. Credit: Walter Jones, Jr.

“It’s incredibly frustrating, because everything my parents taught was to go to school, get an internship, and it ends with a job,” Jones said, some six months out of Georgia Southern University.

One can only imagine where Jones fits into the pecking order of the Gen Y generation, some of whom view a credit score as a social barometer. The aching familiarity of his story was covered in a segment of a recent economic forum hosted by Georgia State University.

“The world has changed since I started teaching here in 1999,” Conrad Ciccotello, an associate professor and director of wealth management programs, said at the GSU forum on May 29. “We’re in a fascinating environment.”

Jones, 24, said he enrolled in college to study psychology and earn the ticket to a good job. His interest shifted to the audiovisual field. Now he’s seeking and finding work in AV, but only as a short-term contractor.

Jones’ world has a new currency, and it’s not Bitcoins.

“You work for yourself as freelance status and sell your services to someone who will pay you enough,” Jones said. “I’m sure you’re aware of the freelance problem – constantly trying to drum up work while you’re doing the jobs you have.”

Ciccotello said he learned from a Millennial seated next to him on a flight that a credit score has become a social currency. She told him a story about dating a fellow and expecting the relation to end. Ciccotello asked the reason. 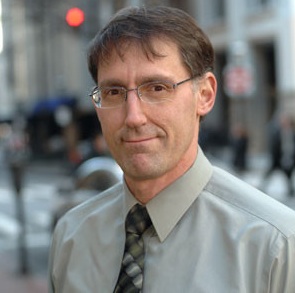 “He’s stuck in the 600s,” Ciccotello said was the response. “That means his credit score, and he’s average. 700 is the magic number. If you don’t get to 700, you’re average. This is a symptom of the role numbers play in their lives – their credit scores, GPA, SAT scores.”

Jones has a lot of numbers in his life:

Jones described his spirits as, “not bad.” He thinks he’s in a good geographic place for finding work in AV, given that many colleagues have moved from the northeast to Atlanta because there is a demand here for their services. Friends are in worse spots, he said – despite their numbers.

“A friend has applied for four or five internships this summer alone, and they all said, ‘You’re not qualified for this position.’ That’s because of the people who are 40, 50, 60 years old. But she is qualified because she graduated in the top five in her class of 700, she was a STAR student in college, she was in the honors program, and she worked to get through school.” 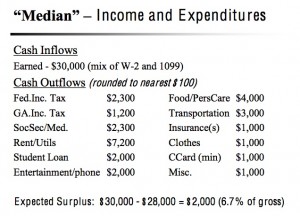 This chart summarizes the balance sheet of a Millennial in the median, according to Conrad Ciccotello. Credit: GSU 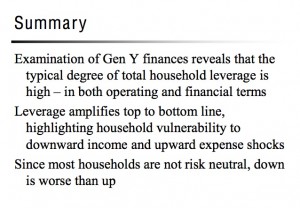 This is a summary of the economic situation faced by the Gen Y generation, according to Conrad Ciccotello. Credit: GSU