The front third of the Crum & Forster building in Midtown will be saved, and the rest of the building razed, according to a consent order signed Tuesday by Fulton Superior Court Judge John Goger. 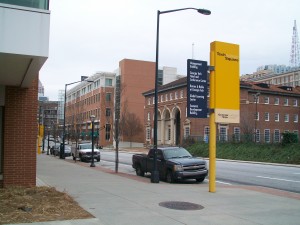 The front third of the Crum & Forster building, the building with the arches, will be partially demolished under a consent order signed Tuesday. Credit: David Pendered

These terms were reached Tuesday in an amended consent order negotiated by lawyers for the Georgia Tech Foundation and two defendants – the city of Atlanta and its Board of Zoning Appeals. The ruling appears to end a preservation battle that has raged since GTF filed a request for a demolition permit in April 2008.

Goger denied a motion to allow five interveners in the case, a ruling that affirmed a comment from a lawyer for the city who said all concerns of the proposed interveners were resolved by the consent agreement.

The five were represented by Mary Carol Cooney, a former deputy city attorney. Their possible next steps were not clear immediately after the ruling.

The consent order instructs the Board of Zoning Appeals to vote at its next regularly scheduled meeting “to render a decision consistent with the findings herein.” The BZA declined in November to vote for a consent agreement reached in September.

If the BZA declines to comply with the new agreement within 60 days of the order being signed, GTF may file an objection and the court instructed that it shall have all remedies available for enforcement, “including its contempt powers.”

Cooney had contended, during her oral argument, that the decision to preserve any of the building was reached only because of the presence of the proposed interveners.

Goger indicated he was ready for the matter to be resolved: “This case … has gone on way too long.”

The consent order provides a fair amount of history behind the case. The nine-page order includes a site plan that shows a sketch of the parts of the building to be demolished, the part to be preserved, and the fences to be erected to protect trees.

The property is considered part of Georgia Tech’s signature development, Tech Square. Tech wants to build a computer center on the block. 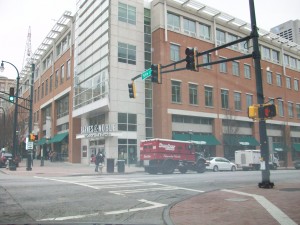 A book store anchors this signature corner at Tech Square. The Crum & Forster builidng is located a block in front of the red truck. Credit: David Pendered 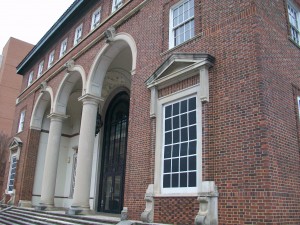 The front third of the Crum & Forster building, including this arch, is to be preserved under a consent order signed Tuesday. Credit: David Pendered 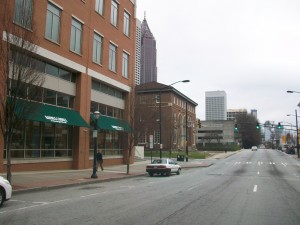 Green awnings mark the book store at Tech Square, and the Crum & Forster building is ahead to the left. Credit: David Pendered 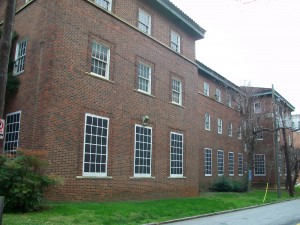 These two, closest segments of the Crum & Forster building are to be razed, according to a consent order signed Tuesday. Credit: David Pendered