Crum & Forster — the fight to save the entire historic building continues

The saga to save the Crum & Forster building continues.

The Georgia Tech Foundation made a presentation Wednesday afternoon before the Atlanta Urban Design Commission saying it was not economically feasible to restore the entire building.

Instead, Georgia Tech is proposing keeping only the front third of the historic building so it can build a major development on the balance of the block bordered by Spring Street, Armstead Place, West Peachtree Street and Fourth Street.

The Georgia Tech Foundation has not given up.

“There is litigation ongoing with the City of Atlanta,” said Carl Westmoreland, an attorney for the Georgia Tech Foundation. 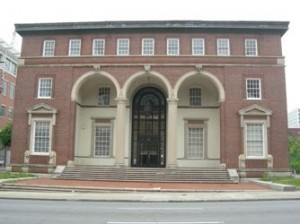 The Crum & Forster building at 771 Spring St. in Midtown

The application to demolish two-thirds of the building is based on the foundation’s argument that restoring the building would not provide reasonable economic return.

“The potential for redevelopment on this site is extremely high without touching the Crum & Forster building,” Zoeckler told the Urban Design Commission.

One of the big areas of disagreement is whether the Foundation paid too much to buy the Crum & Forster building in 2007. The purchase price was $11 million, but Zoeckler said the value of the property on county tax records at the time was $2.6 million.

“We are seeing here a vast discrepancy,” Zoeckler said, adding that the building shouldn’t be allowed to be demolished just because the Foundation paid too much for the property and is now arguing preserving the entire structure is not economically viable.

About 30 people attended the meeting, most wearing green-and-white stickers to save the historic building. Zoeckler also mentioned that several organizations oppose the demolition of the building, including the National Trust for Historic Preservation.

Boyd Coons, executive director of the Atlanta Preservation Center, described Crum & Forster as “one of the most superb examples” of classic architecture in Atlanta. He also appealed to the Urban Design Commission, which he said was “independent of politics and other pressures.”

The next step is that the application to demolish two-thirds of the building now will go before an “Economic Review Panel” — three people will decide whether it is economically viable to preserve the building. The burden of proof is on the applicant — in this case, Georgia Tech.

Georgia Tech gets to appoint one person to the panel; the commission appoints one person; and then those two people select the third panelist.

Westmoreland said that Georgia Tech had selected developer Tom Aderhold, who has completed several preservation projects in Atlanta, including “The Stacks” in Cabbagetown. Aderhold’s late father — John Aderhold — was a Georgia Tech alum who had remained actively involved with the institution.

Meanwhile, Robert Reed, chairman of the Urban Design Commission, said its representative would be R. Scott Taylor, president of the Carter real estate firm. Aderhold and Taylor will now have to select the third member of the panel.

Both Georgia Tech and the opponents will have until May 21 to present materials that will be considered by the panel. Once the panel makes a recommendation, the commission will have only two choices — to accept or reject the findings of the panel.

Right now it is tentatively scheduled for the panel to submit its report to the Atlanta Urban Design Commission on June 13. 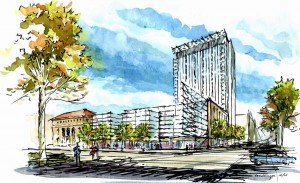 Much of the discussion at Wednesday’s meeting centered around the question of whether one can preserve the historic integrity of a building by just saving a portion of it.

Laura DePree — the granddaughter of one of the building’s architects — believes the entire building should be saved — stating that the building must be “complete” in order to preserve the “integrity of the architecture” and the original design.

“Atlanta has an unfortunate pattern of destroying some of its most beautiful buildings in the name of progress,” said DePree, who attended the meeting with her mother, the daughter of Lewis “Buck” Crook, one of the building’s architects (who was a Georgia Tech graduate). “We encourage Georgia Tech to find a development scheme that would incorporate the whole building.”

At one time, John Carter, the president of the Georgia Tech Foundation, had said that if the institution acquired the rest of the block, there would be more flexibility to develop around the Crum & Forster building.

But Carter said in an email a few days ago that acquiring the rest of the block would give Georgia Tech the ability to “save a portion of the building” rather than the whole building.

“In this regard, we have been in discussions with representatives from the preservation community for at least two years about our intentions to save the front portion of the building,” Carter said.

Architect Tom Ventulett, who is working with the Georgia Tech Foundation on this project, said the design requirements to build a data center on the site is the reason why only the front portion of the Crum & Forster building can be saved.

But several leaders in the preservation community believe a creative solution can be found so that the entire building can be saved and still be able to develop a data center and office building.

In a semi-related move, Atlanta City Councilman Kwanza Hall has submitted a bill to “undesignate” the parking lot around the Crum & Forster building as part of the historic landmark. Presumably, that too could give Georgia Tech greater flexibility to develop around the building.

In short, several concurrent efforts are underway — the court cases over the city’s denial of the initial demolition permit and the timing of the designation of the building as a historic landmark; the Economic Review Panel that will go before the Urban Design Commission; and the actions at City Council.