DeKalb County interim CEO Lee May delivered a State of the County Address Thursday in which he promised a bright future while acknowledging his temporary seat in the county’s top office. 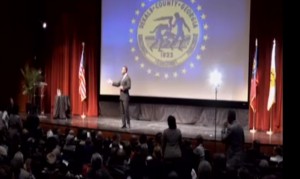 May named problems and proposed solutions. He portrayed his office and the Board of Commissioners as working together, rather than feuding. He said DeKalb’s young people will benefit from a new Office of Youth Services and a functioning school superintendent and board of education.

May took the stage around 8 p.m. and introduced his wife and mother of his two, soon to be three, children, Robin May. Quickly, the faith leader reached into the Old Testament to open his address with the biblical figure Nehamiah rebuilding the walls of Jerusalem – a task May likened to the rebuilding of DeKalb after CEO Burrell Ellis was indicted last year on felony charges of public corruption.

“At this time of uncertainty in our county … we have to step forward, all of us, and serve as leaders,” May said. “We have to come together, just like Nehamiah. … The future of our county does not reside in one. It resides in the foundation of unity.” 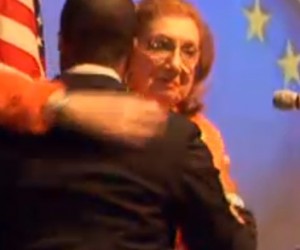 Former DeKalb CEO Liane Levetan embraced interim CEO Lee May after she introduced him at the State of the County address.  Credit: penderedgroup

May appeared comfortable as he spoke for about 30 minutes. He moved easily about the stage in the Porter Sanford III Performing Arts & Community Center, in Decatur, referencing at times the videos playing on a screen behind him.

May said his office intends to reshape the county government to meet the challenges. Gov. Nathan Deal chose May to serve as interim CEO after Deal removed Ellis from office last July.

Highlights of May’s proposals include:

May concluded by saying he recognized his remarks hadn’t addressed the “elephant in the room” – how he can make these promises when Ellis could be exonerated and returned to office.

“We must do it together,” May said. “This is not a county of one. … You must not stop working alongside government to improve the community. … We will do it together. This is DeKalb County, Georgia. I believe in our future. The best is yet to come.”