A spay and neuter program for animals whose future offspring may otherwise be destined for DeKalb County’s troubled animal shelter will be the beneficiary of a bowling fundraiser scheduled for Sunday afternoon in Stone Mountain.

Proceeds of the event will go toward a sterilization program in a county where more than 5,000 animals a year are euthanized, according to a report issued in February by a county task force.

DeKalb’s a kill rate was about 60 percent of the 8,500 animals handled annually at the county’s shelter, according to the report. DeKalb’s rate is higher than reported in Cobb, Fulton and Gwinnett counties, although those counties handle fewer animals. 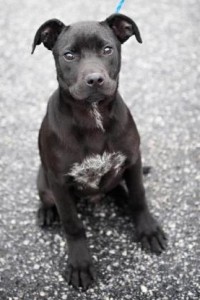 Six out of 10 animals taken in by DeKalb County's animal shelter are euthanized, according to a county report. Credit: DeKalb County Animal Services

The fee includes bowling, a game package and light refreshments at Stars and Strikes, a facility located in a shopping center at 1741 Mountain Industrial Blvd. in Stone Mountain.

The fundraiser is being hosted by DeKalb County commissioners Elaine Boyer, Stan Watson and Sharon Barnes-Sutton.

“This fundraiser is a first step toward raising awareness of our animals’ needs in DeKalb,” Boyer said in a statement. “So many four-legged creatures who cannot speak for themselves need care and our fundraiser will help make sure we stop the cycle of overpopulation.”

To buy tickets for the fundraising event, go to www.helpdekalbanimals.com or contact Boyer at this copy-and-paste address: ecboyer@dekalbcountyga.gov.

“Animals deserve an opportunity to find a forever home, and this is a fun way for the community to get together and support efforts to connect families and pets,” Watson said in the statement.

“I am happy to participate in this opportunity to raise funds to improve the conditions at our animal shelter and to engage the community in helping provide resources and quality care for our animals,” Barnes-Sutton said in the statement. 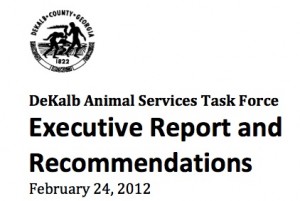 DeKalb’s Board of Commissioners created the DeKalb Animal Services Task Force to respond to the high rate of euthansia at the county’s shelter. The group convened in March 2011 and worked for eight months. The group’s findings and recommendations are included in a 45-page report released Feb. 24.

The results show how quickly demand for animal services has outpaced the county’s services.

The building historically has been hard to find because of poor signage, the report said. One sign on the site that was prominent read: “Adoption Site: Kittens and Cats, Puppies and Dogs” beneath the word, “INCINERATOR,” according to the report.

Here are some headlines from the report:

But not all was doom and gloom in the report. The county’s animal cruelty unit earned a shout out: