Delta Air Lines gets no love from 2015 Georgia Legislature 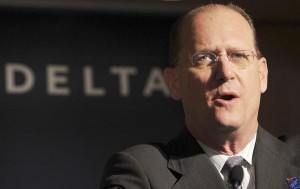 Delta Air Lines employs 33,000 people in Georgia ─ more than any other company in the state. But that didn’t stop state lawmakers from punishing Delta’s outspoken CEO.

The legislature voted to reinstate a jet fuel tax on Delta.

Why? To teach CEO Richard Anderson a lesson. They want him to keep his mouth shut.

Even after being told the jet tax could only be spent on airports ─ that the state would not get any of the Delta dollars, legislators didn’t back down.

Georgia is supposed to the friendliest state for business in the country. Yet it punishes its largest employer because its CEO spoke out for policies that he believed would keep Georgia globally competitive.

Delta is the magnet for almost every other company that moves or expands in Georgia. Smart leaders would be bending over backwards to listen to Anderson ─ making sure he’s a happy camper. He’s not.

In 2007, Atlantans made buttons with the slogan: “Keep Delta My Delta.”

The fear was that as the airline emerged from bankruptcy, it would move its headquarters to another city. But Anderson and Delta’s board decided to keep the headquarters in Atlanta.

After such a mean-spirited session, it’s time to show Delta some love.

Let’s reprint “Keep Delta My Delta” buttons; so our state officials can make Delta feel welcome in Georgia once more.