Young will turn 89 on Friday. 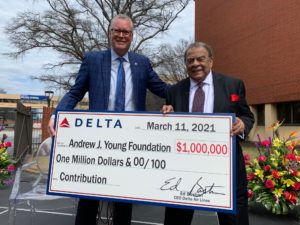 Young also was instrumental in helping Delta gain entrance to a number of international markets during his tenure as U.S. Ambassador to the United Nations in President Jimmy Carter’s administration.

Formerly known as the A-2 building, the new name will be the Ambassador Andrew J. Young International Building. The building is the first place where Delta’s new hires enter, and it is also the place where the Delta board meet several times a year on its top floors.

“No one better connects the world than Andrew Young,” Delta CEO Ed Bastian said during the event. “We owe you a huge debt of gratitude. I don’t know of another individual who has had more of an impact on our company than Andrew Young.”

Young has a long history with Delta, having served on its board of directors from 1994 to 2004. During his tenure as mayor (from 1982 to 1990), Young played a critical role in elevating Atlanta’s international profile and supporting Delta’s growth as a major international airline. 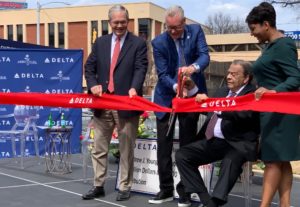 In addition to naming the building after Young, Delta also made a $1 million contribution to the Andrew J. Young Foundation, whose mission is to support and promote education, leadership and human rights in the U.S., Africa and the Caribbean. The contribution will fund several film projects and other issues of interest to Ambassador Young.

For decades, Young has been a strong friend, resource and advisor for Delta.  Just this past January, Young joined a town hall for Delta employees where he discussed the history of racial injustice as well as his thoughts for the future of race relations in light of recent events across the county.

“So many things can be said about Ambassador Young, but I’m also reminded of the African proverb it takes a village to raise a child,” Mayor Bottoms said. “When you are privileged to grow up in Atlanta, you are part of a village with leaders like Ambassador Young and Mayor Franklin and so many others who keep you top of mind and in their hearts with all that they do.”

A Boeing 767-300 scale model plane bearing the markings of a plane dedicated to Young in 2012 was presented to the former mayor during the ceremony. Bastian also announced that there will be an exhibit honoring Young at the Delta Flight Museum this summer. That will be in addition to displays of Young in the renovated lobby of the building named after him. 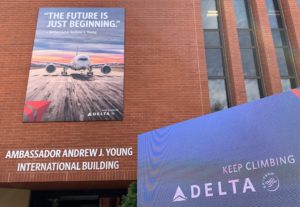 Young, a native of New Orleans, was an early leader in the civil rights movement, serving as executive director of the Southern Christian Leadership Conference and as a close confidant to Martin Luther King, Jr.

Young later became active in politics, serving as a U.S. Congressman from Georgia – holding the seat that eventually was held by the late John Lewis – and serving as the 55th mayor of Atlanta when he joined Billy Payne in trying to lure the 1996 Summer Olympic Games.

“He believes with conviction in the city he loves so dearly,” Payne said during the event. “Together with his personal integrity and charisma, that won the games for Atlanta in an overwhelming upset. So, what I’ve learned about Andy Young, I’m going to get emotional,

he is the greatest man I’ve ever been privileged to know.”

Young who admitted he was surprised by the event, repeatedly said “God Bless You” to Bastian, the speakers and the exclusive group of his closest friends and family who were present for the ceremony. But most of all, he thanked Delta.

“I would say that Coca Cola got us started for the first 100 years” Young said of Atlanta’s growth. “And then Delta has been taking us the rest of the way.”

Note to readers: The event was held outside, and there were fewer than 50 people invited. Every one was tested on-site for COVID-19 before the event. And people were wearing masks during the event unless they were speaking and on the stage. Delta Air Lines has an extensive testing operation, and it also is hosting the state’s largest vaccination site at the Delta Flight Museum. Eventually Delta,,working in partnership with the Georgia Emergency Management and Homeland Security Agency (GEMA), is expected to be able to vaccinate as many as 8,000 people a day.