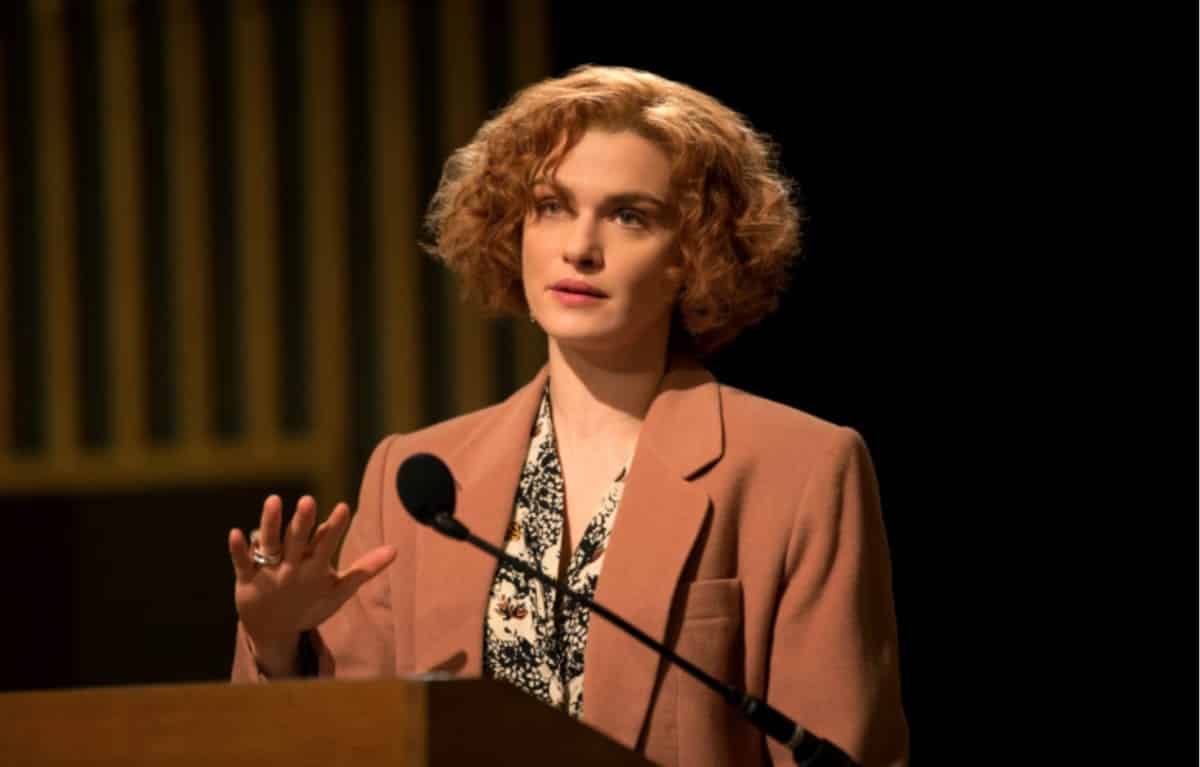 “Denial” is respectful, respectable and precisely the sort of film Stanley Kramer might’ve made. Trouble is, Kramer’s heyday was in the ‘50s and ‘60s. Meaning that, while exceptionally well-intentioned, “Denial” is also a bit dull.

Fortunately, dull isn’t always synonymous with boring.  “Denial” certainly holds your interest.  Plus, it offers a performance by Rachel Weisz that’s anything but dull. 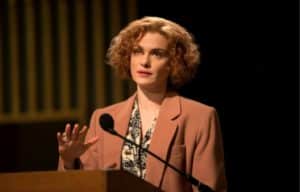 Rachel Weisz may make the Oscar’s short list for her portrayal of Emory University professor Deborah Lipstadt, who takes on a Holocaust revisionist in a British courtroom. Credit: indiewire.com

She plays Deborah Lipstadt, a prominent professor at Emory University whose specialty is Jewish studies.   The movie is based on the true story of the 1996 lawsuit brought against her by British historian and Holocaust denier, David Irving (Timothy Spall).

Irving is the sort of grandstander who likes to say stuff like, “More women died in the back seat of Ted Kennedy’s car than died in an oven at Auschwitz.”

Or, “Auschwitz wasn’t built for extermination. The Jews made it up so they could get money.”

Luckily, Lipstadt gives as good as she gets. She refuses to engage with him in a public debate after he unceremoniously crashes one of her lectures. “I also don’t debate people who say Elvis is alive,” she dismissively explains.

Then Irving takes it one step further, suing her and her publisher, Penguin Books, for libel, i.e., he claims they are part of a conspiracy to damage his reputation.

This leads to a trial in England where, as opposed to the United States, the burden of proof is on the accused. In other words, Lipstadt must go to trial to prove that the Holocaust actually happened.

Her team of British lawyers, led by Richard Rampton (Tom Wilkinson), makes two decisions right off the bat.  They want the case argued in front of a judge, not a jury. And they don’t want Lipstadt or any Holocaust survivors to take the stand.

Regarding the latter, they are adamantly against letting the survivors be savaged by Irving, who, naturally, is serving as his own attorney.

Regarding the former, well, Lipstadt is a brave, well-spoken woman, but she’s also a bit of a firebrand. Putting her on the stand would just give Irving more ammunition. As Rampton explains, “A trial is not therapy.” 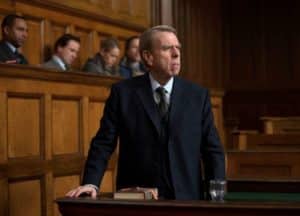 Holocaust denier David Irving, played by Timothy Spall, filed a lawsuit against Emory University professor Deborah Lipstadt in England, where she had to prove his allegations were false. Credit: news.nationalpost.com

Sidelining Lipstadt/Weisz may be a wise decision legally, but dramatically, it takes a lot of the pizazz out of the movie.  Not that razzle-dazzle is essential in a film about a subject this serious.  But courtroom dramas typically thrive on fireworks. Even “Judgment at Nuremberg,” which touched on the same subject (and was produced and directed by the aforementioned Mr. Kramer), gave us some full-blown histrionics courtesy of Judy Garland and Montgomery Clift.

Instead, “Denial” gives us history. There’s a visit to Auschwitz – atypical for a non-documentary – that shocks us with its mounds of shoes and suitcases, its barb-wire fences that seem to weep as a cold drizzle falls. For those unfamiliar with the hideous details of Hitler’s Final Solution, this may be enough drama for a couple of movies.

There is a terrible beauty in the moment when Lipstadt confronts Rampton as he trudges around the remains of a crematorium, lighting a cigarette. “What feels best isn’t necessarily what works best,” he tells her.

He is treating Auschwitz not as the setting of unspeakable horror, but as a crime scene. He’s Peter Falk as Columbo, nosing around, finding clues and evidence that others might not register.

Actually, that’s how “Denial” works best – as a police procedural of sorts. Director Mick Jackson lays out the facts as methodically as Rampton does.  He asks his audience to be patient, to be observant, to believe in the power of the legal system.

Wilkinson and Spall are not only expert actors; they are expertly cast. Wilkinson brings a certain moral gravitas to his role, the same strength and decency he brought to movies like “In the Bedroom” and “The Grand Budapest Hotel.”

As for Spall, he’s probably best known as the alter ego of Ron Weasley’s pet rat in the Harry Potter movies or as the repellant title character in “Mr. Turner.”  He knows exactly how to mix crafty with nasty.

It’s possible both may have a shot at awards in the supporting actor category.  And given the dearth of strong roles for women this year, Weisz might just make Oscar’s short list.

She plays Lipstadt like an older version of the prickly character that won her an Oscar for “The Constant Gardener” in 2005.  She’s touchy, proud, passionate, a bit stiff-necked and relentlessly committed to seeing justice done. The truth matters to her, no matter the context, no matter how trivial.

When, at the movie’s end, someone remarks on her Brooklyn accent, she quickly corrects him: “That’s Queens.”

That pride of place, that fierce insistence on what’s true and what’s not, is part and parcel of “Denial’s” core appeal.