Denouncing QAnon claims about human trafficking: A plea to sign petition of IHTI

Georgia is a case study of Margaret Mead’s words: “Never doubt that a small group of thoughtful, committed citizens can change the world; indeed, it’s the only thing that ever has.” 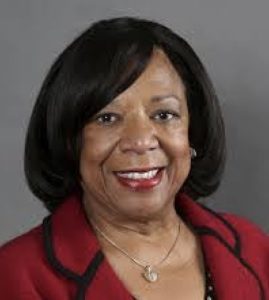 Since 2000, when our first anti-human trafficking bill was passed, committed Georgia citizens, including our business, multi-faith, and civic sectors, have fueled the movement to end child sex trafficking.

While January is Human Trafficking Awareness Month, we are challenged by a current movement that could derail our collective efforts to end human trafficking. Throughout the past year, media reported the rapid spread of debunked QAnon conspiracy theories, using the hashtag #SaveTheChildren in an attempt to legitimize unverified claims regarding child sex trafficking.

Among QAnon misinformation, there are three claims that are false: 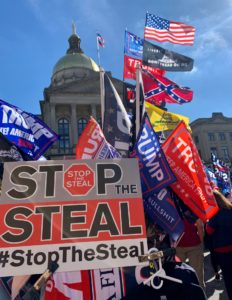 QAnon supporters support President Trump, whom they contend is fighting a network of Satan-worshipping celebrities and government officials who engage in human trafficking. Credit: Kelly Jordan

History confirms that social change movements do not achieve their goals quickly, always taking longer than desired or planned. Women’s suffrage and gay marriage activists needed many generations to achieve their goals. Some social issues, such as correcting racial inequity, are yet to be resolved. However, we know that those committed to change do not stop the work. As barriers arise, we identify, then remove them. 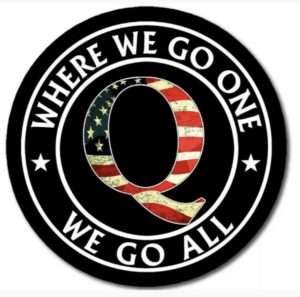 ‘Where we go one, we go all’ has become a motto among followers of QAnon. Credit: ebay.com

The vision of the International Human Trafficking Institute, an initiative of the National Center for Civil and Human Rights and the convener of the Metropolitan Coalition to End Human Trafficking, is that not even one child is exploited for labor and sex. Please join our efforts by signing onto our statement denouncing QAnon’s rhetoric. In his last words, published on the day of his funeral, the Honorable John Lewis asked that we: “Continue to build union between movements stretching across the globe because we must put away our willingness to profit from the exploitation of others.”

Please sign on to our statement denouncing dangerous and false claims, so we may continue the work of making human trafficking history, during our lifetime. This is the complete statement:

Note to readers: Deborah Richardson, the executive director of the International Human Trafficking Institute, has testified before Congress, opened the first safe house for exploited girls in the southeast, coordinated national campaigns to end online trafficking platforms, and continues a 20-year quest to change laws, policies and hearts to end the trafficking of persons. The Atlanta City Council in 2019 presented Richardson with a recognition of her, “dedicated effort to stop sex trafficking and compassion and support for helping vulnerable survivors in Atlanta and beyond.