The Development Authority of Fulton County board as seen in the live-stream version of its April 13 strategic planning retreat and meeting.

Intent on post-scandal reform and mission-shifting, the Development Authority of Fulton County has approved a new slate of deeper tax breaks aimed at incentivizing more affordable housing in South Fulton. And it’s moving toward boosting its fees and demanding more information from developers seeking the incentives.

The major addition of a new tax-break tool intended for South Fulton, approved at the DAFC board’s April 13  strategic planning retreat, came with a North-South split among members that initially stymied the idea. North Fulton also got attention as the board approved the concept of a roughly $2 million tax break for a possible life sciences mega-project in Johns Creek code-named “Project Lemon Lime.”

Long dominated by North Fulton political figures, the DAFC plunged into a financial scandal last year over questionable payments to board members. It’s now emerging in a self-reform mode under board chair Michel “Marty” Turpeau, a South Fulton business leader intent on incentivizing more development — and especially “attainable,” workforce-affordable housing — to his part of the county.

The DAFC’s main power is providing property tax abatements via tax-exempt bonds to developers on a 10-year schedule that provides a 50 percent break at first that scales down over the life of the bond issuance. Even before the financial scandal, critics have long complained the tax breaks were often unneeded and their rubber-stamped deals non-transparent and mysterious.

The major new moves include a longer, deeper tax break — a 15-year deal that starts with a 70 percent discount. That’s only for developments that meet a yet-to-be-finalized wish list of affordability and amenities, though. The DAFC is also working on a list of information developers will be required to provide, including far more financial details. The intent, as board member Mike Bodker put it, is to “challenge them to explain to us, why the heck do you need this?”

Other tax-break formulas may be on the way as well as the DAFC looks to fill up its toolbox and essentially become a far bigger and nuanced player in South Fulton development.

The new 15-year version is especially aimed at mixed-use projects providing rental housing units at rates of 60 to 100 percent of the area median income with a rough goal of at least 30 percent of the units meeting those affordable rates, though lower ratios could be approved. Those figures drew some unease from board members, as Bodker said a mix lower than 30 percent didn’t sound like much of an impact. Board member Kyle Lamont said even the 60 percent of AMI rate is “marginal impact” regardless of the number of units. On the plus side, the DAFC’s calculation would be based on localized incomes, not the usual — and much higher — metro-wide version. 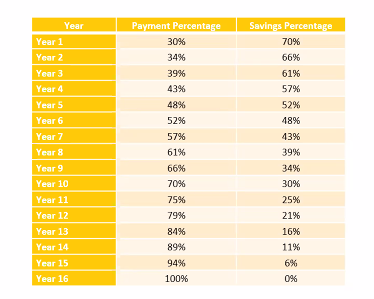 The schedule of the DAFC’s new 15-year tax abatement for certain projects, which begins with a 70 percent property tax discount.

Turpeau said the DAFC had to strike a balance in South Fulton with the need for affordable housing and redevelopment and homeowner fears of lower-income subsidized tenants. He said he understands the area’s middle-class, largely African American population has “waited for the Red Lobster to reopen that shut down 40 years ago,” but fears a remake could be spoiled if officials “‘start bringing back people who aren’t like me.’”

The board’s serious split was over a South Fulton focus of the new abatement policy, which originally was pitched at applying south of I-20 and/or in “distressed” U.S. Census tracts, which are largely in South Fulton, though some are as far north as Sandy Springs.

“The one tool that we have has not worked in the south part of the county,” Turpeau said, calling it an “emotional thing” to hear for years to wait for market forces to solve problems. Lamont said the new tool should be targeted in South Fulton because the area “has been one of the most slighted places in the county in decades.”

Members aligned more closely with North Fulton praised the intent but didn’t buy the restrictive language, leading to 4-4 split votes. Eventually the policy was approved without the South Fulton-restrictive lingo, but also with a commitment to produce materials that will market it exclusively there. The DAFC also will study a possible staffing increase to handle the expected influx of new projects.

New developer application transparency efforts in the works include a system proposed by Bodker that includes an initial filing notice and a technical review by DAFC staff members, who will recommend approval or denial. And the application likely will include far more information about finances and benefits, though exactly how much detail remains a point of tension.

More application details was music to the ears of board member Thomas Tidwell, a frequent critic of opaque applications where the DAFC basically took a developer’s word that the tax break was needed. “My goal is never to have to ask a question,” said Tidwell, who has often interrogated developers in meetings. “Saying that a project’s not financially feasible doesn’t tell me squat.”

Board member Mike Looney, who is the superintendent of the Fulton County School System, said that too often, he has to learn concepts and new information in the same meeting where consideration and a vote happen. He also called for housing-related applications to include information about impacts on Fulton school enrollment. He noted that county taxpayers cover about 70 percent of the $12,000 per student annual cost of public education, and that a new development can boost that cost while a tax break can shift more of the burden to other payers.

In another big issue, Lamont called on the board to address the “elephant in the room” — the 1.5 percent transaction fee the DAFC takes from bond deals to fund itself. He called on increasing the rate, which he said is lower than that of many similar county and city authorities. The idea is to provide a bigger pot of money for other activities. Board vice chair and state Sen. Brandon Beach suggested such uses as bolstering the funding of community improvement districts in South Fulton for landscape improvements.

Meanwhile, the board tentatively approved an old-school deal with the mystery company for a 10-year break at the Johns Creek site — a former State Farm insurance hub at 11650 Johns Creek Parkway at McGinnis Ferry Road. The unnamed company already has a Fulton presence and is looking to consolidate there or move elsewhere, apparently partly depending on what tax breaks it can extract.

According to DAFC, the medical device manufacturing development would cost in the range of $55 million to $75 million, retain 250 to 325 jobs and create 225 new jobs.

One building could be demolished as soon as January, with another 188,000 square feet preserved and new construction of 150,000 square feet. The new complex would include the manufacturing facility, office space, laboratories and warehouses.