Discord over transportation funding proposal has a familiar ring

Georgia lawmakers are seeking about $1 billion a year to improve mobility, including congested areas such this section of I-20 near I-285. . File/Credit: David Pendered

Georgia’s continuing debate over transportation funding shows that it may be possible to displease a lot of the people most of the time.

Georgia lawmakers are seeking about $1 billion a year to improve mobility, including congested areas such this section of I-20 near I-285. . File/Credit: David Pendered

The current proposal, House Bill 170, has triggered so much comment that it’s already grown from eight pages to 14 pages. This much revision in a bill is uncommon, especially in a bill that has only been aired at two subcommittee meetings, most recently on Monday.

Only five years ago, intense debate unfolded over the transportation funding proposal of that era. Lawmakers dickered over House Bill 277 from before it was formally introduced, on Feb. 2, 2009, until the House and Senate adopted a compromise bill on April 21, 2010. Then-Gov. Sonny Perdue waited until June 2 to sign it into law.

The history of the 2010 bill, along with the revisions already made to the current bill, suggests how starkly HB 170 may morph as it moves through the legislative process.

The Association County Commissioners of Georgia predicted as much when it adopted a posture of wait-and-see: 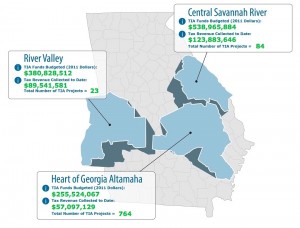 On the other hand, the Georgia Municipal Association didn’t hesitate to come out flatly against HB 170. “Oppose,” is the position stated on GMA’s website. GMA produced estimates of the bill’s financial impacts on local governments and schools that has been widely cited by local officials as they criticize HB 170.

At that time, Georgia was part of an emerging trend in several states to put transportation taxes to a vote. ACCG produced a report in 2009 that concluded: 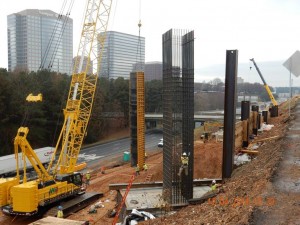 Georgia turned to public private partnerships to build major projects, including one that’s to ease congestion in Cobb and Cherokee counties. File/Credit: GDOT

Regional sales taxes appealed to a majority of voters in other states. Of 13 referenda, nine passed and four failed. The results in Georgia were a complete reverse.

Voters in only three of Georgia’s 12 regions approved the proposed 1 percent sales tax.

Those three districts approved funding for $1.8 billion to spend on 871 transportation projects. Almost $271 million has been collected since tax collection started Jan. 1, 2013. Projects are underway including three that had groundbreakings this year: