By Maria Saporta
Published in the Atlanta Business Chronicle on May 8, 2015

A historic Atlanta church displaced for the new Atlanta Falcons stadium has found a new home.

Friendship Baptist Church on May 3 unveiled plans for its new church on a site that’s now part of the Atlanta University Center.

The church, which dates back to 1862, sold its previoius, historic location at Mitchell Street and Northside Drive to the Falcons, who paid Friendship $19.5 million for the property.

The new permanent Friendship Baptist Church will be located on the site of Gammon Hall, a dormitory for United Methodist Church students attending 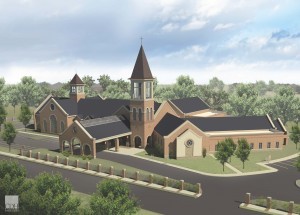 Friendship paid $4 million for the site at the corner of Walnut and Beckwith in Vine City, which is about four blocks from the church’s historic location.

The Atlanta Demolition Co. began to tear down Gammon Hall on May 4, and it is expected that it will take about 10 weeks to raze the building.

“It’s not a copy of the old church, but it pays homage to the old church,” said Lloyd Hawk, CEO of Friendship Baptist LLC. The architect is CDH Partners from Marietta, and the builders will be Van Winkle & Co. and C.D. Moody Construction.

Although the finish of the church will be a reddish brick rather than the white stucco of the historic Friendship, several elements of the old building will be incorporated into the new building. 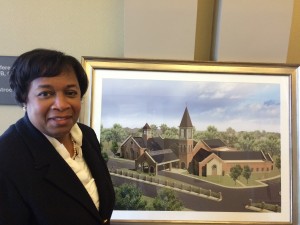 The plan is for the new church to open by April 2017, which would be Friendship’s 155th anniversary. Friendship always celebrates its anniversary during the last Sunday in April.

The history is worth celebrating. It was started by 25 former slaves who came together to form the congregation with the help of white Christians. It became Atlanta’s first black Baptist autonomous congregation in 1862, and it was independently organized in 1866 just after the Civil War.

The Ninth Street Baptist Church of Cincinnati in Ohio bought a discarded railroad boxcar in Chattanooga and sent it to Friendship in Atlanta. The boxcar served as a place of worship on Sundays and as a classroom on weekdays.

Over the years, “nine daughter churches” were born out of the congregation, including Wheat Street Baptist Church and Providence Baptist Church. Two of Atlanta’s historically black colleges began in the basement of Friendship – Morehouse College and Spelman College. 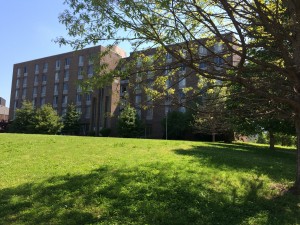 The new Friendship Baptist Church will be located on the site of ITC’s Gammon Hall, which is being demolished (Photo: Maria Saporta)

Dennard said the new church will be nearly twice as large as the historic Friendship with a total of 44,000 square feet. The sanctuary will seat 500 people compared to 325 in the former church. The Fellowship Hall will have room for 450 people and the chapel will be able to seat 200. The church also will have state-of-the art technology.

The tower will be lit every evening, and Dennard hopes that people will be able to see the church from downtown.

“This is a milestone to have come this far,” she said. “We have had lots of meetings. We have tried to focus on what our ministries are going to need. We haven’t had that opportunity before.”

One of the church’s main goals will be to better serve the Vine City and English Avenue communities while attracting more young people, including students from the Atlanta University Center, to be part of its congregation, Dennard said.

“Change is in our plan,” she said.