Divided America and the legacy of Robert Kelley 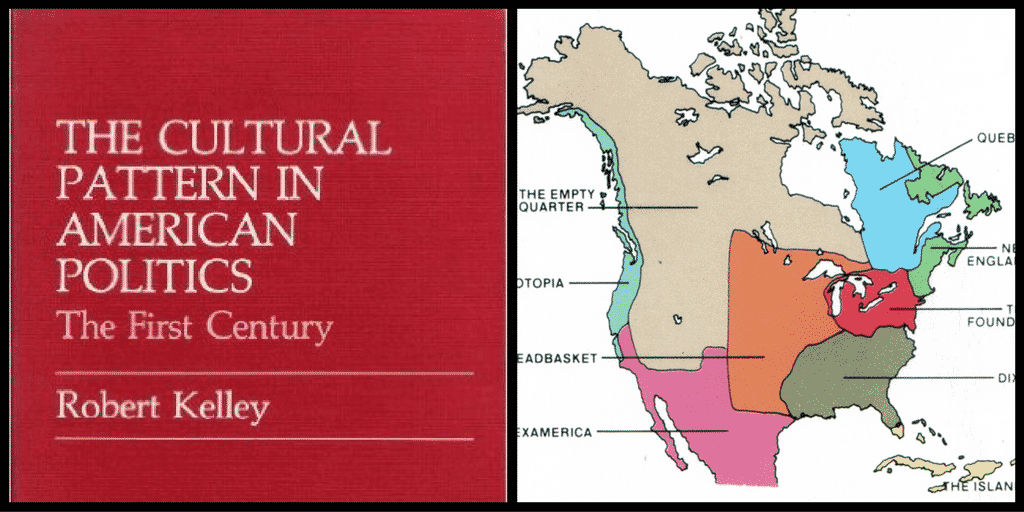 Ever pick up a book in a used book store and then wonder for years how it came into your hands?

I don’t remember which campaign I was covering or where the used bookstore happened to be — maybe Chapel Hill — where I found Robert Kelley’s “The Cultural Pattern in American Politics: The First Century.” Not an inviting title, exactly, but if you want to understand the shape of the electorate in this year’s election, this book, published in 1979, would be a great place to start.

“The Cultural Pattern” was the forerunner of what has become a sub-genre of books that see the United States as a nation divided along deep cultural lines that predate the country’s founding. Joel Garreau popularized the idea in his 1981 book, “The Nine Nations of America,” dividing the country into “nations” with fanciful names like “Dixie,” “Breadbasket,” and “Ecotopia.” Colin Woodward’s 2012 “American Nations: A History of the Eleven Rival Regional Cultures of North America,” is the most pessimistic in its assessment of the nation’s long term prospects for hanging together.

By far the worthiest, and the weightiest, of all the books through which this idea threads is David Hackett Fischer’s “Albion’s Seed: Four British Folkways in America,” published in 1989. A meticulous ethnographic examination of four waves of British migration which manages to be both scholarly and enormous fun, “Albion’s Seed” makes a convincing case for the enduring impact of these migrations by examining the family backgrounds of the U.S. presidents up to that date.

Curiously, however, Kelley’s book went unmentioned in these later books (though I don’t have Garreau’s book at hand to check it), and has been largely forgotten. It’s not as if Kelley didn’t have his share of recognition,  particularly in his native California, where he taught at UC-Santa Barbara. But when I called there on a research project a couple of years ago, I could find no one who knew of Kelley or his book.

We’ve been talking about the culture wars for so long that it may be hard to see what was so novel in Kelley’s approach to the political history of the nation’s first century. But in his day historians and political scientists overwhelmingly looked to economic factors as the root cause of all political effects. Kelley thought there was “a kind of tidal rhythm at work,” causing politics to swing between the economic and cultural points of gravity. It was, he reflected, “ a paradoxical interrelationship.”

To correct what he thought was a lack of attention to the “cultural pattern,” his book traces the descendants of New England Puritans, Virginia Cavaliers, Mid-Atlantic merchants and Scots-Irish backwoodsmen through every presidential election through the 1890s. He demonstrates the strong influences at work in their political choices, even when their cultural origins had grown obscure and they had mingled with other groups.

The groups which came together to form a new nation had profound differences in their attitudes about the value of education, women’s rights, slavery and wage labor, and respect for governmental authority which haven’t disappeared in the 21st Century. It would be hard to poll, but the post-election map makes it very clear that the descendants of those Americans who voted for Andrew Jackson in 1828 voted overwhelmingly for Donald Trump this year. These are the descendants of the great migration Fischer, in “Albion’s Seed,” calls “Borderlands to the Backcountry.”

Kelley perceptively describes Jackson, a Scots-Irish Presbyterian, as the nation’s “first ethnic president,” drawing Irish Catholics in the coastal cities as well as Scots-Irish voters in the hinterlands, and choosing a Dutchman, Martin Van Buren, to succeed him. Each for their own reasons, all these groups disliked the Virginia and New England elites which had held sway in American politics until then.

Reflecting the “tidal rhythm” Kelley refers to, the Jacksonian era was also one in which modernization and the globalization of the economy profoundly shook communities across the country. They were years “filled with an anguished outcry at the loss of quietude, secure family lives and status, and social confidence.”

Sound familiar? It may be that when economic and cultural tensions peak at the same time, the greatest political tsunamis happen.