DNR board silent after Riverkeepers call for greater protection of waterways

The tipping point for some Riverkeepers was the death in May of 33,000 fish in the Ogeechee River, a shallow waterway that drains more than 5,500 square miles of sand hills and coastal plain into Ossabaw Sound, south of Savannah.

That incident propelled the Riverkeepers to call Tuesday on the appointed board members who oversee the Department of Natural Resources to provide the political backbone to protect the state’s rivers, creeks and wetlands. That includes securing adequate funding from the Legislature to enforce environmental rules and laws.

The DNR board members listened silently and did not respond. Their lawyer reminded them just before the Riverkeepers spoke that public officials are advised not to talk about matters that are now or could be matters of a lawsuit. The fish kill resulted in a consent order that is the subject of a court challenge.

The DNR board, in overseeing the state’s natural resources, has historically walked a fine line. Its task involves balancing the environmental impact of polluters against the jobs and economic impact created by those pollution-emitting companies.

For example, over the years, the board has declined to get too stringent with the state’s poultry industry, which accounts for more than 100,000 jobs in a $13 billion a year industry, according to August figures from the Southeast Farm Press. On the other hand, the board a decade ago did require all wastewater dischargers to post an information sign at their outfalls.

One of the Riverkeepers who said the Ogeechee incident spurred him forward was Gordon Rogers, executive director of the Flint Riverkeeper. The Flint winds from East Point to Bainbridge, where it joins with the Chattahoochee River to form the Appalachicola River in Florida.

“At the beginning of 2011, I would not have supported such a campaign,” Rogers said of the grassroots effort launched in November to demand clean rivers.

“But the situations in Athens, Trail Creek, in town, draining into the Oconee; on over 70 miles of the Ogeechee; the chronic situation on the Altamaha at Rayonier; my knowledge of wetlands losses in South Georgia; and a clear understanding of what is driving low flows on the Flint pushed me past a point where steady, solemn work was not appropriate any longer,” Rogers said. 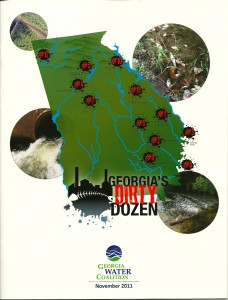 King America Finishing is a subsidiary of Westex, Inc., a Chicago-based firm that manufacturers resistant fabrics, protective clothing and cotton fabrics. King America Finishing was shuttered in 2001 by Spartan International, throwing 230 workers out of a job until Westex purchased the plant later that year and reopened it with workers trained through the state’s Quick Start program and Ogeechee Technical Institute.

Click here to see a report on the state’s role in reopening the King Finishing plant.

After the fish kill, King America Finishing entered into consent decree that requires it to pay $1 million in an unspecified environmental project. The coalition contends the state could have fined the company up to $90 million for violating clean water laws.

Ogeechee Riverkeeper Dianne Wedincamp declined to talk about her organization’s legal challenge to the consent decree. But she did deliver an impassioned call for the DNR board to step up its enforcement efforts.

“I ask the board member to recommit to their responsibilities as board members,” Wedincamp said. “Citizens have lost confidence in the agencies charged with protecting the people and the natural resources of the state. I know this – because I am in the community every day.”

The Riverkeepers’ call for action comes as the DNR board on Wednesday is slated to approve a new director of the environmental protection division.

EPD Director Allen Barnes has resigned from the post he accepted in 2009, when he replaced Carol Couch. Gov. Nathan Deal has recommended Jud Turner as Barnes’ replacement. Turner served chief legal advisor to then-Gov. Sonny Perdue and has previously served as general counsel of the state Department of Education.