How the dome got its gold 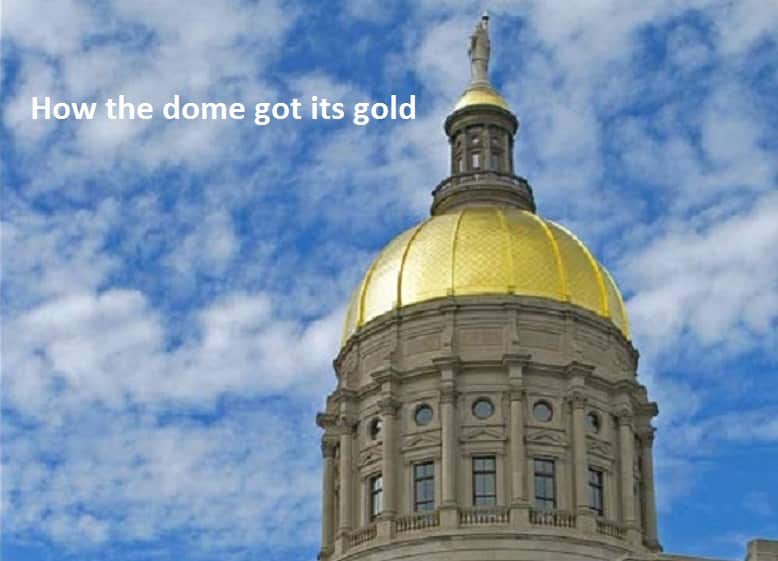 If the sight of the gold dome atop our capitol inspires you, that’s a good thing. It should. The Romans used domes, as did other ancient civilizations, and some of the most striking buildings in the world — the Taj Mahal, the Hagia Sophia, and St. Basil’s Cathedral, to name a few — are capped with them.

In America, Thomas Jefferson was one of many early American architects who drew inspiration from America’s connection to the republican ideals of ancient Greece and Rome and sought to replicate that in architecture (hence the preponderance of government buildings with columns and domes). Most state capitols are topped with domes, but of those, only ten are gilded. We have one of the largest here in Atlanta, but it wasn’t always gold. This is the story of how the dome got its gold.

You’ve likely heard of the ‘49ers, the gold miners who headed west in 1849 for the California gold rush, but have you ever heard of the ‘29ers? They were gold miners here in Georgia. The details are fuzzy, but sometime in 1829 gold was discovered in north Georgia near Dahlonega. (In fact, “Dahlonega” means yellow in the Cherokee language, a clue that the area’s earliest residents were aware of the region’s riches long before white settlers were.) Georgia’s gold rush was just that, though: a rush. It didn’t last, and when gold was struck in California, many of Georgia’s miners headed west. Mining continued in Georgia, but the industry never fully recovered. 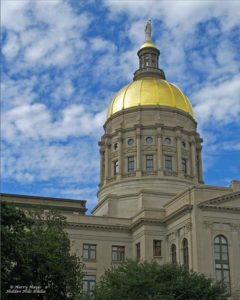 Georgia’s current capitol was completed in 1889, its roof built of tin and wood. The dome received repairs in the 1930s and again in the ‘40s. By the 1950s, when portions of the roof had nearly blown off completely, officials knew it was time for serious renovation. In 1957, the architect in charge of the project, Thomas Bradbury, and an engineer, Gordon Price, proposed that the dome be rebuilt with sturdier materials. And covered with Georgia gold.

It shouldn’t come as a surprise that our story turns back to Dahlonega for its next chapter. Dahlonega, after all, was the site of Georgia’s gold rush, as well as Price’s hometown, and the town would be the answer to two important questions: where would the gold come from? and who would bear the cost? Dahlonega, of course!

The Dahlonega Jaycees took charge. They organized a day for Dahlonegans and others from Lumpkin County to return to their roots and pan for the gold themselves in local streams; they also sought donations from those who still had pieces from decades earlier.

The pioneering spirit was at work, too, when it came time to deliver the 43 ounces of gold the Jaycees had collected to Atlanta. The gold would make the trip via wagon train, just as the Georgia treasury had in 1807 when the capital moved from Louisville to Milledgeville. On August 4, 1958, seven covered wagons accompanied by “33 adults, 18 children, 15 mules, six horses, one dog, and two State Patrol cars” began the three-day journey from Dahlonega to Atlanta. The gold was proudly conveyed in a chest said to have belonged to William Few, one of the two Georgians (the other was Abraham Baldwin) who had signed the U.S. Constitution. The wagon train traveled just three miles per hour. 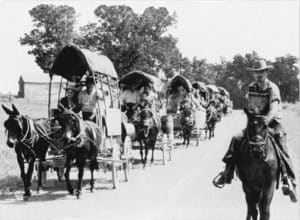 Perhaps Atlanta had failed to grasp the significance of the wagon journey, or perhaps the city had just failed to plan. When the wagon train arrived to spend the night in Piedmont Park before proceeding to a capitol ceremony the next day, it was directed to a patch of mud, much to the chagrin of the wagon master and Atlantans who felt that proper southern hospitality had not been extended. The wagons were eventually directed to a drier spot, and by 9:30 p.m. that evening a traffic jam had developed around the park due to everyone trying to catch a glimpse of the wagons. On August 7, 1958, Governor Marvin Griffin received the gold on the steps of the capitol.

In Philadelphia the Georgia gold was milled into gold leaf the thickness of a gum wrapper, and was applied to the capitol’s dome by a team of Massachusetts steeplejacks in January 1959. No one understood at the time that the gold couldn’t properly adhere in winter, but the error made itself known soon enough: by 1977 the dome had already lost half its gold.

The Dahlonega Jaycees came to the rescue again, and headed up a massive statewide fundraising campaign. How to raise the money? By wagon train, of course.

It started small, with just one wagon making a trip through west Georgia in the spring of 1979, but that summer nearly 40 wagons, stage coaches, and buggies gathered in Jekyll Island to begin a month-long journey that took them through all of Georgia’s previous capitals (Savannah, Augusta, Louisville, and Milledgeville) and ended in Dahlonega. The wagon train raised awareness and money, but many of the participants were there simply for the pioneer experience; enthusiasts joined in from all over the country. 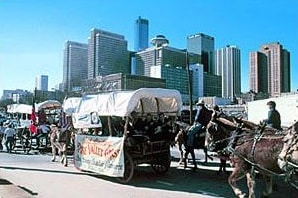 The final leg of the 1979 wagon train’s journey took it through downtown Atlanta. Courtesy of Georgia Info

By the fall of 1979, the required gold had been collected. On November 24, 1979, another wagon train assembled in Dahlonega to deliver it to Atlanta. Estimates vary, but somewhere between 50 and 75 wagons were accompanied by 150 outriders and escorted south by state troopers and Game and Fish Division personnel. A bluegrass band in one of the lead wagons kept the group entertained.

After stops in Coal Mountain and Roswell, the wagon train arrived in Atlanta in a downpour, but spirits remained high (as in 1958, they spent the night at Piedmont Park). The weather had cleared by the next day when the group proceeded through downtown to deliver 60 ounces of gold (carried in the same chest as in 1958) to Governor George Busbee at the capitol. The gold was refined in Kennesaw, milled in Bavaria, and finally applied in the spring of 1981.

These days, damage to the gold dome is repaired as it occurs, so it appears unlikely that we’ll see another wagon train, though it’s fun to imagine what that might be like. As one participant of the 1979 wagon train said, “It’s the experience of all pulling together” that’s the best part.

Previous Article
Online map of all parks, amenities in Georgia created for proposed state plan for parks, recreation
Next Article
‘Hell or High Water’ so good it reminds how thin the year’s movies have been