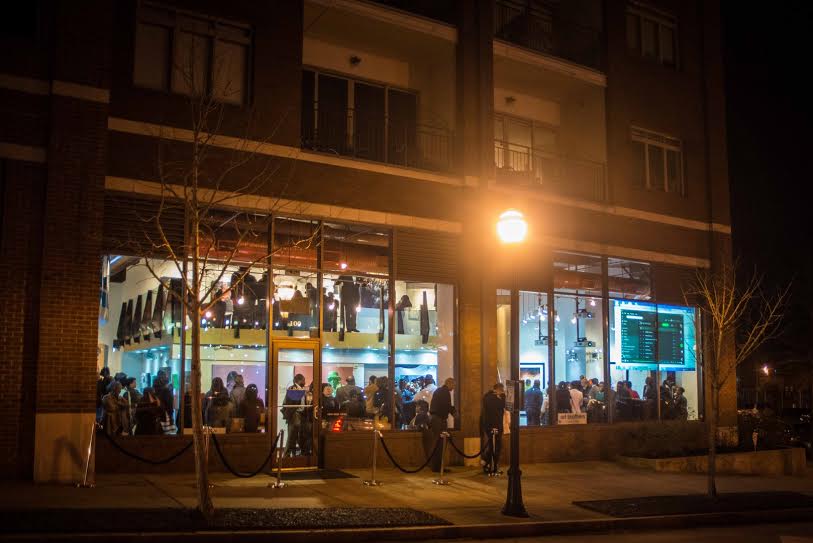 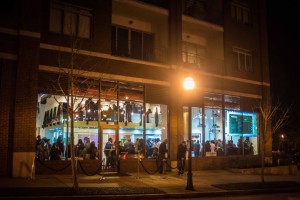 For Aaron Henderson, along with his sons Omari and Onaje, African American fine art is the family business. He has been painting and “just trying to tell our story” since he was an 11-year-old Birmingham boy, while his sons support him and the Black aesthetic by owning and operating Atlanta’s ZuCot Gallery in the Castleberry Hill community neighboring the new Mercedes Benz Stadium.

“We are the largest African American owned art gallery in Atlanta and the Southeast,” the 67-year-old father, Aaron, beams proudly.

All three of the Henderson’s are engineers educated at Tuskegee University, but because of their electrical engineer father’s influence and avocation, art was in the siblings’ blood. And for the past 12 years it has been their business. Until four years ago, they traveled the Southeast peddling Black art and doing what they call Art Tastings to educate and enrapture potential consumers. Then the art brothers, as they call themselves, teamed with Troy Taylor who is also an engineer to open the ZuCot Gallery full time. It is an engaging and exemplary environment that appeals to young professionals like themselves.

“Our first Art Tasting event ever was at [Atlanta City Council President] Caesar Mitchell’s house,” says Omari Henderson, a chemical engineer. “One of the things we discovered when we started doing all of this was that a lot of our collectors were not our age, so we wanted to make them understand that they could become collectors when they were in their twenties. Now Onaje is 37 and I am 40, and what we have done is build a kind of collection of collectors. So what we want to do is to continue to do that, and we want to continue to drive people toward the arts. And it doesn’t stop just with these professionals. I think we can start actually with young people. We feel like we have a responsibility to be custodians of our culture.” 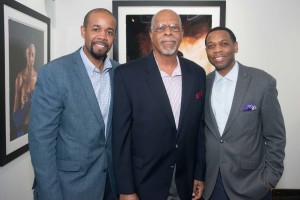 “That’s what collecting art is, it’s part of owning a piece of our culture” adds Onaje Henderson, a mechanical engineer. “We are only on this planet for a finite period of time, and this art is going to outlive all of us. We are blessed enough to be able own a piece of it and be a steward of it and be in a space with the art during that particular time. History is told through art in all different civilizations. It is the same with us.”

The Henderson brothers joined forces to create a company to manage their father once they’d graduated college. “We wanted to help him sell his work, and that’s how we started,” recalls Omari.

“There is an aesthetic that is not being addressed in the blackest city in America, so who else is telling these stories” opines Onaje about the state of Black art in Atlanta. “We have the responsibility to do things at this gallery that focus on us, on African Americans. The trick is now waking up Atlanta.”

“Atlanta is not a good art market but we can change that,” adds Aaron. “There are several collectors here but we are not doing it on a grand scale. They are older people. If you look around the gallery these are young people who are really getting interested in their culture.” 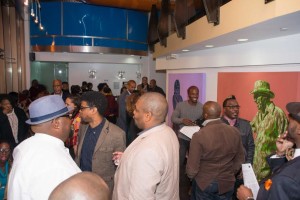 He was referencing the more than 300 people attending Friday night’s private opening of Double Consciousness: A History of Unhealed Wounds. Coined by civil rights activist and author W.E.B. Dubois Double Consciousness describes an individual whose identity is divided into several facets, and reveals the psycho/social divisions in American society. Artists Alfred Conteh, Charlotte Riley-Webb, and Aaron Henderson pull from personal and historical references to create a narrative that speaks of this duality in conscience from slavery to present day.

“My work is just about trying to tell our story,” says Aaron, a self-taught artist. “It has always been that way. I remember during the height of the civil rights movement I was so taken back by what was happening with the young people even though I was one of them. Two of the four girls murdered during the 16th Street Baptist Church bombing were in my class from the fourth grade until high school, Carole Robinson and Cynthia Wesley. It had a serious effect on me; it was a just a mind altering experience. So at one point most of my work was of children. My mother used to say, Aaron please don’t paint anymore sad children.” 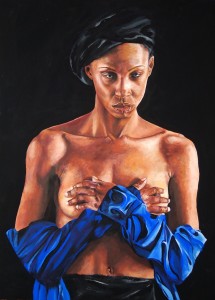 Bid ’em In by Aaron Henderson. Photo: by John Stephens

Aaron Henderson’s show now on display is part of his 60 painting series that deals with his interpretation of spirituals, which are sometimes referred to as slave songs or the old African American Negro spirituals. There are estimated to have been about 10 thousand of those songs. Six thousand of them have survived
“My whole thing is that the story that we have of us as a people is the most dynamic story on earth,” he says passionately. “And I think if we tell the story and if we know the story we will behave differently toward each other. And realize how beautiful we really are. Art can do that. You will find that the art that is typically done by African American artists is not art for art’s sake. There’s always been a message.”

Sam Burston, National Director of United Negro College Fund and an accomplished artist in his own right says the ZuCot Gallery reflects Atlanta’s “return to its great roots as it relates to art.” 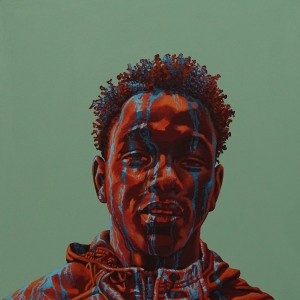 The late Paul R. Jones of Atlanta was once one of the top 100 art collectors in the United States. He donated his 1,700-piece African American art collection valued at $4.8 million to The University of Alabama in 2008. James Jackson and Jerry Thomas are now among Atlanta’s premier Black art collectors.

“Once upon a time Black art was really flourishing in Atlanta but now it is going through a lull period perhaps because of the economy,” says Burston. “Slowly it is returning because people are actually buying my work so that means something, This ZuCot Gallery represents a renaissance.”