A scene from "Downton Abbey: A New Era"

But that’s not “Downton Abbey: A New Era.” It’s all about what’s expected. A scene from “Downton Abbey: A New Era”

The second feature film generated by the mega-successful PBS series, “A New Era” turns tea and crumpets into comfort food. After the traumas of a pandemic, a mob attack on Congress and a gallon of gas that costs as much as a starter home, the graceful insularity of life as a British aristocrat – or even the servant of a British aristocrat – in the late 1920s comes off as a welcome return to an unruffled world that knew what it was about.

Not that there aren’t problems faced by the Lord and Lady Crawley and company, but they’re more along the lines of leaky roofs, vulgar movie people and mysterious inheritances.

“A New Era” offers two storylines. In one, the Dowager Countess is bequeathed a villa in the South of France by a man with whom she shared a brief romance over half a century ago. The man’s widow (Nathalie Baye) is, understandably, not amused but while the Dowager Countess is somewhat perplexed, she’ s also not stooopid. “Do I look like as if I’d turn down a villa in the South of France?” she remarks.

Still, said widow invites the family down for a look-see, so half the cast, including the Crawleys (Hugh Bonneville and Elizabeth McGovern), their indispensible butler Carson (Jim Carter), Lady Edith (Laura Carmichael), upstart Irishman Tom (Allen Leech) and his spouse Lucy (Tuppence Middleton), and several others head to the Riviera. Their mission: to try to figure out why this mystery man left such prime real estate to a member of their family. A scene from “Downton Abbey: A New Era”

Meanwhile, back home, Lady Mary (Michelle Dockery) and a half dozen other familiar faces play host to a film company that has rented Downton Abbey for their new production (remember that leaky roof?). The not-especially-welcome visitors include an attractive director (Hugh Dancy), a dashing leading man (Dominic West) and a snobbish, spoiled leading lady (Laura Haddock). In a plot pretty much taken intact from “Singin’ in the Rain,” the advent of talkies casts a long shadow over what was supposed to be a silent movie.

But in the tradition of soap opera at its best, what happens matters much less than to whom it happens. And whether you are a longtime fan or a vaguely curious newcomer, “A New Era” offers a cast of splendid English actors doing splendidly English things back when it was okay to behave in such an unabashed upstairs/downstairs manner.

The film fairly coos with tea-cozy charm. Oh, look, the usually unflappable Carson gets seasick crossing the Channel. Oh, look, the director is becoming enamored of the married Lady Mary. Oh, look, the servants get to get all posh when the movie suddenly needs dress extras for a banquet scene. 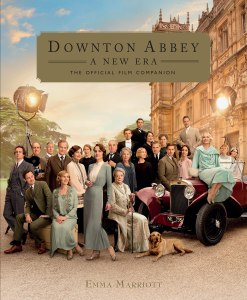 True, the non-fan may still have trouble sorting everyone out and may not be as enamored of the sillier moments.

But “A New Era” does its job and does it well. Plus, it’s odd to think that, once upon a time, this sort of Merchant/Ivory knock-off was considered a serious movie and comic-book epics were considered escapism.

These days, with the Marvel Universe raking in zillions and period pieces few and far between, something like “A New Era” has become the new escapism.

“I feel like I’ve been transported to a different planet,” intones Dame Maggie at one point.

So do we. And that, I guess, is the appeal. Super-powered heroics are, in their way, what we expect at the movies. People in jewels and jaunty motorcars, now, that’s something completely different. Something we may miss more than we realized.