Drought’s grip easing, but 2,000 azaleas died at one home in Rome because of dry conditions

Drought conditions have eased in Georgia and Lake Lanier is just 0.4 foot short of full pool, according to the National Drought Mitigation Center and a monitor at the lake. 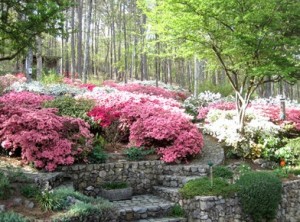 More than 2,000 azaleas have perished at a home in Rome during the drought. About 3,000 azaleas still bloom. Credit: Rome News-Tribune

The improvements are likely a function of rainfall amounts that, at least in the Atlanta area, have exceeded the 30-year-average during the first three months of the year. Average rainfall totals are nearly 13.7 inches and this year’s total is nearly 17 inches, excluding April, according to the National Weather Service.

But don’t tell that to a couple in Rome, who blame the lingering drought for the loss of some 2,000 azaleas on their property. The couple once had about 5,000 azaleas, according to a report on the drought center’s website.

The center carried a story from the Rome News-Tribune, which reported that Jack and Penny Martischnig bought and planted a handful of azaleas to decorate for their wedding 32 years ago. The Martischnigs added to the original plantings, and Jack Martischnig said there were 5,000 blooming plants. Now, the number is down to about 3,000 and Jack Martischnig blamed the drought.

The improving conditions concerning the drought in the deep South even made it into the Beige Book, the report on economic conditions issued in mid April by the Federal Reserve Bank in Atlanta. Other districts, including Dallas, report they are still struggling with drought conditions. 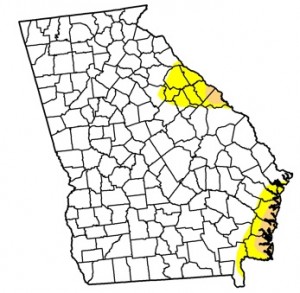 More than 92 percent of Georgia is free of any drought condition. The yellow and beige colors on Georgia’s eastern border mark areas of abnormally dry or moderate drought, as of April 23. Credit: U.S. Drought Monitor

However, the drought’s grip is loosening across the country, just as it has in Georgia, according to the drought center. The recent torrential downpours in the Midwest are having an impact, and still to come are the waters from melting snow.

The exceptional drought reported at the start of the year in a significant portion of the Midwest now affects a significantly smaller region. Nonetheless, the drought remains worse than it was at this time a year ago, according to the drought center.

In Georgia, more than 92 percent of the state was free of drought conditions as of April 23. That compares to a drought of severe to exceptional nature covering nearly two-thirds of the state on Jan. 1.

The drought situation in Georgia began changing dramatically in February.

The improved conditions bode well for the state’s agriculture economy. Prices paid to farmers have risen moderately for soybean and corn, and prices for broilers have reached record highs, according to the Beige Book. 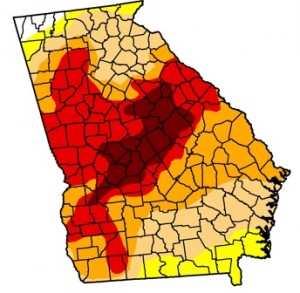 Two-thirds of Georgia suffered under drought conditions that ranged, on Jan. 1, from severe to exceptional. Credit: U.S. Drought Monitor