E-scooters and bicycles need their own lanes in Atlanta 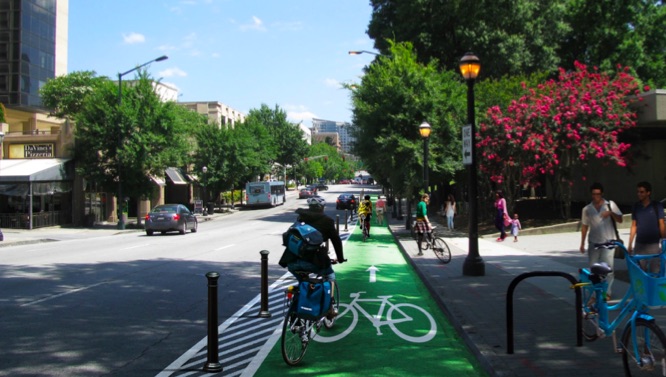 Move over automobiles. People are taking over.

In the central areas of Atlanta, a phenomenon of “micro-mobility” is transforming the way people are getting around.

E-scooters, one-wheelers, Segways, electric bicycles and regular bicycles (devices that usually travel at less than 15 miles an hour) are demanding their fair share of the street.

It’s part of the evolution of our city streets and the need to welcome personal mobility modes of transportation beginning with pedestrians on sidewalks and transitioning to a dedicated lane for these new alternative modes of travel. In contrast to road engineering trends over the past 50 to 60 years, streets are no longer just for cars. 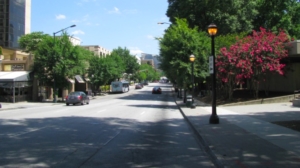 A view of West Peachtree Street in its current state (Special: Midtown Alliance) 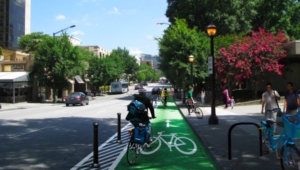 That was a central theme of the annual meeting of the Midtown Alliance at the Fox Theater on March 19 when every speaker appeared on stage riding different devices – everything from e-scooters, one-wheelers and bicycles.

“Who would have guessed a year ago that we would have 7,000 scooters and new mobility devices in Atlanta,” said Kevin Green, president and CEO of the Midtown Alliance. “We still have got some challenges to work out. We need to create safer places for people to ride. We have an opportunity to organize things in the public realm. We need to create safe places for people to ride. This is an absolute imperative.”

Clearly, there needs to be something in between – a micro-mobility lane where riders are traveling faster than pedestrians but slower than regular cars.

For years, several communities throughout the city, region and state have been calling for “complete streets” that can harmoniously accommodate all modes of transportation – from wide sidewalks, bicycle lanes and regular traffic.

But never has the need been greater than now.

“We see an urgency to create more multi-modal streets that can accommodate a wider range of uses,” said Rebecca Serna, executive director of the Atlanta Bicycle Coalition. “E-scooters are such a simple technology. It’s amazing how quickly they’ve caught on. A shared electronic device has opened up so many opportunities. Obviously, there was a latent demand. And who knows what’s around the next corner.” 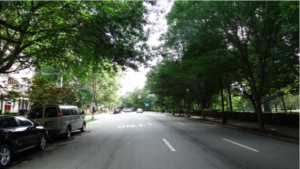 Piedmont Avenue as it is now (Special: Midtown Alliance) 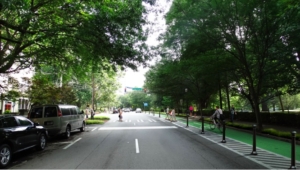 A redesigned Piedmont with a protected lane for bicycles and e-scooters (Special: Midtown Alliance)

As our city becomes more populated, we will need to rely more on MARTA to get around. But the problem has always been the “last mile” connectivity. We’ve been trying to figure out the best ways to get to-and-from MARTA stations to the places we want to go.

Obviously, Uber and Lyft can help meet the need for that last-mile connection. And bicycles also have been an option – including the shared bicycle programs. But now the e-scooter and the e-bicycles have made it a lot easier for many to move around the city without a car.

The problem is that our streets haven’t caught up to this personal mobility revolution.

“The answer really is a connected network of paths,” said Green, before asking a rhetorical question. “Have we really created the city we want, the street environment we want as a walkable, mixed-use district?”

Ideally, that street environment would have a bicycle/e-scooter lane separated by some sort of barrier for safety.

“It would be a repurposed lane,” Green said. “We would be taking over underperforming asphalt.”

Yes, having fewer car-only lanes might slow down traffic, but Green said “Midtown is no longer defined by how fast cars go through.” Midtown has emerged into a district with multiple destinations within walking or riding distance.

Serna said the city of Portland conducted a thorough study of the impact of e-scooters on the city. 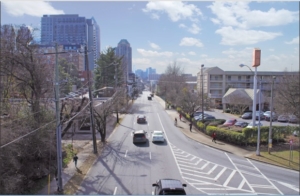 A view of Spring Street as it is today (Special: Midtown Alliance) 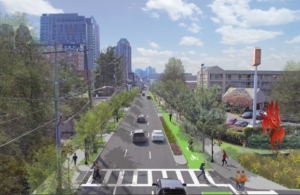 A conceptual drawing of how Spring Street could look with a multi-purpose lane for bicycles and e-scooters (Special: Midtown Alliance)

People used e-scooters for both transportation and recreation. More often than not, e-scooters replaced automobile trips. And Portlanders preferred riding them on the street – especially in bike lanes. The study found that e-scooters reached a population of people who did not ride bicycles.

Closer to home, Midtown Alliance is putting out a request for proposals to create a multi-purpose, micro-mobility lane along Juniper Street. The Alliance also recently held a public meeting to explore ways of turning West Peachtree Street and Spring Street into complete streets with a dedicated lane for bicycles and e-scooters.

Lastly, the Atlanta Bicycle Coalition and students at Grady High School held a forum and third-anniversary memorial ceremony for “Safe Streets” at Monroe Drive and 10thStreet in honor of Alexia Hyneman, a 14-year-old student who died while riding her bicycle across that intersection on Feb.  12, 2016. Planners have been looking at ways to improve that intersection as well as turn Monroe Drive into a complete street. 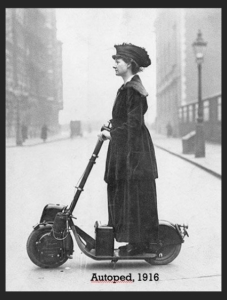 E-scooters may seem like a new development, but the electric autoped was remarkably similar to the modern-day e-scooter (Special: Midtown Alliance)

Those are just a handful of the projects that are in the works to create a network of bicycle-friendly lanes throughout the city.

In light of all the disruptors in the field of micro-mobility, Serna said her organization is considering changes in its mission.

“The Atlanta Bicycle Coalition is considering broadening its mission to be more than just bicycles so it can include other forms of transportation,” she said. Other bicycle advocacy organizations have done just that, including Portland and Chicago. Even Savannah and Macon have changed their names to Bike Walk Macon and Bike Walk Savannah.

All of this fits with the evolution of our city. It’s hard to imagine that before the early 1990s, we had no off-road trails for bicycles and pedestrians. Thanks to the PATH Foundation, we now have more than 250 miles of trails throughout the region.

Protected bicycle lanes are a more recent phenomenon. But as our city continues to evolve, we will build more and hopefully end up with a network of protected lanes throughout the city.

Personal note: When I visited Havana, Cuba more than 15 years ago, I was intrigued to see that major roads had different speed limits for each lane. The right-hand lane speed limit was primarily for bicycles and slower-moving traffic. The middle lane was for vehicles moving at moderate speeds, and the left-hand lane was for faster moving vehicles. 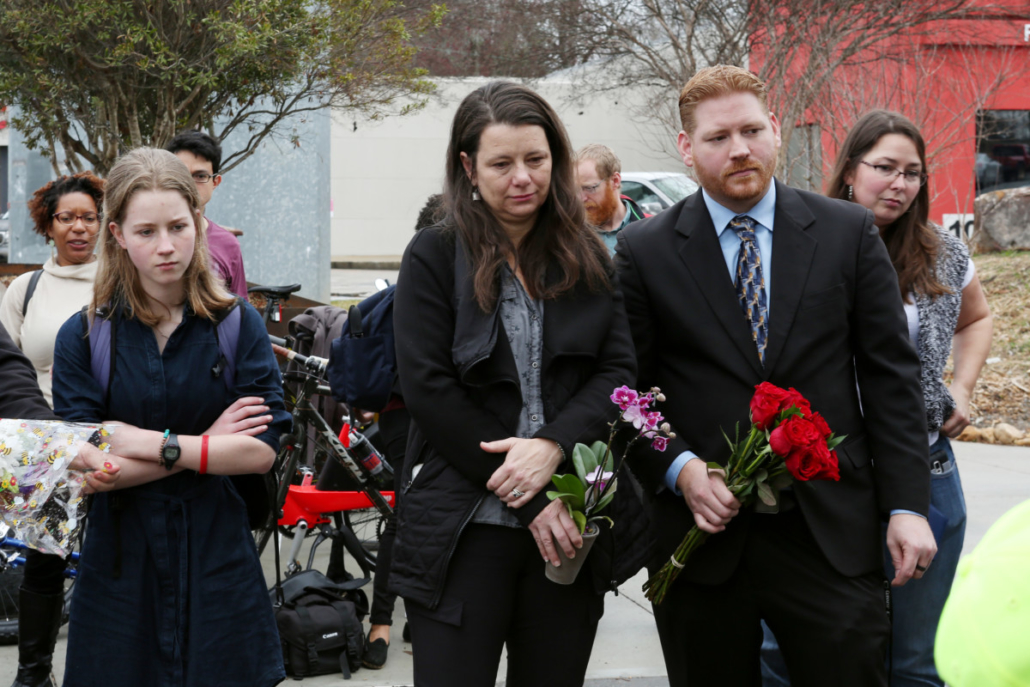 Grady students at memorial rally for Alexia Hyneman on Feb. 12 with Councilwoman Jennifer Ide and Thomas Hyneman, her father (Photo by Evey Wilson) 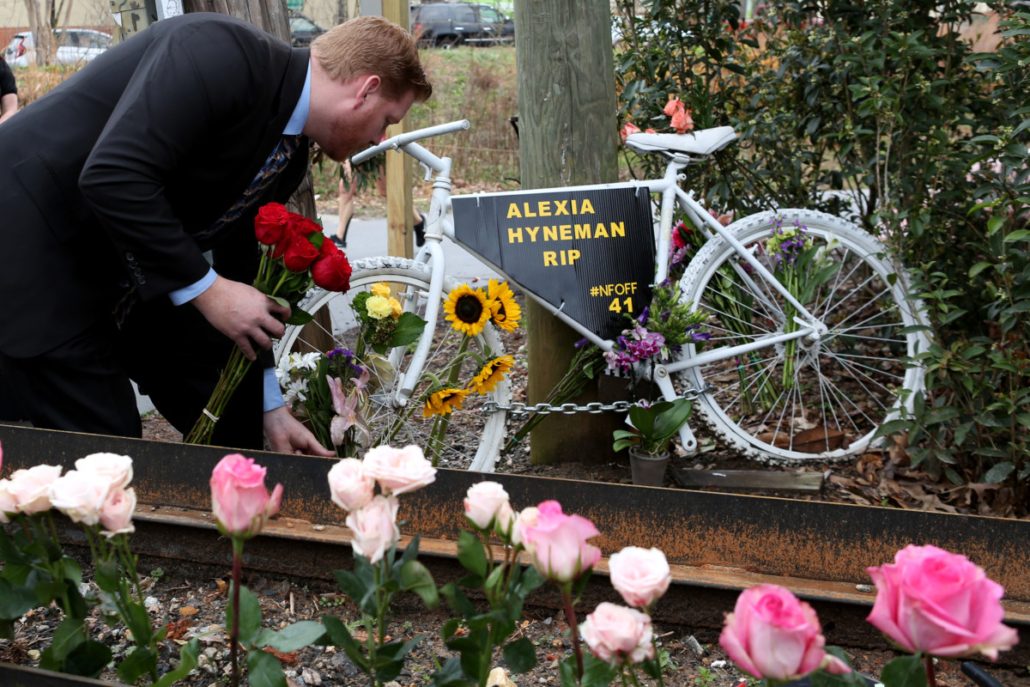 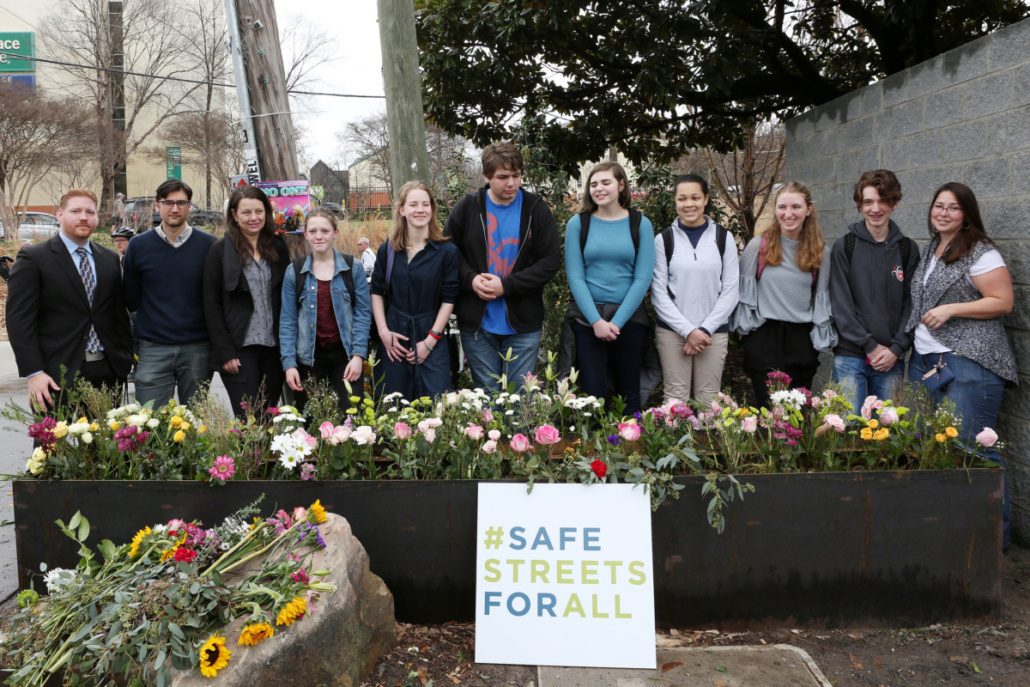