Methane gas captured in a landfill in DeKalb County will be transformed into fuel for vehicles at a futuristic facility where the ceremonial ribbon was cut Monday.

This example of renewable bio-fuel is just the sort of technology that was hoped for by participants of the first Earth Day, in 1970. Sunday marks the 42nd celebration of an event that now involves millions of people in at least 192 countries. 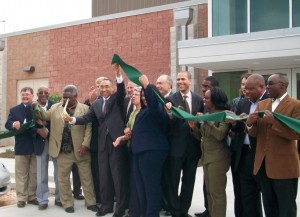 DeKalb’s new facility, which will create compressed natural gas from the methane gas, joins another methane recovery operation at the county’s Seminole Road Landfill. The first recovery facility captures methane for use by Georgia Power, which burns it to drive turbines that create electricity.

Taken together, the two recovery facilities will help DeKalb reduce its carbon footprint and earn money for the county government. DeKalb CEO Burrell Ellis cast the tie-breaking vote in February, 2011 in favor of building the CNG plant.

In terms of the county’s carbon footprint, methane will be captured instead of emitted into the atmosphere; when burned as fuel by county vehicles, the gas will emit fewer wastes than the fuel it replaces. Secondly, the amount of methane that exceeds the needs of the county government will be sold to the public – making money for the county.

“Trash to gas, and gas to cash,” Ellis said, encouraging the audience of about 50 to join him in repeating a line Ellis said is one of his favorites. 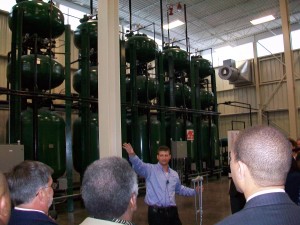 The system works by piping methane gas from the landfill into the facility, where contaminants are removed in a cold oil process and the gas is compressed, said Jeff Photakis, a bio-gas specialist with Energy System Group, the private company that will operate the facility. The inside of the building consists of office space and a small work area filled with a couple dozen large cylinders that will contain the compressed gas.

Incidentally, this kind of gas is referred to as “Renewable Natural Gas,” which is a subset of the category of “Compressed Natural Gas,” Photakis said.

The workforce necessary to run the plant will have to be trained on the new equipment, said Deborah Scott, executive director of Stand Up Georgia. The task of helping to train those workers will be taken on by Trade Up, a workforce development program affiliated with Stand Up and the North Georgia Building and Construction Trades Council. Ellis acknowledged the group during his speech.

The costs of the program are being covered by DeKalb County and a U.S. Department of Energy grant made to Clean Cities Atlanta through the American Recovery and Reinvestment Act of 2009, which was approved during the Obama administration. Many times during the program, Ellis commended Obama for funding ARRA and invited him to visit DeKalb County.

Former DeKalb District Attorney Gwendolyn Keyes Fleming also commended the ARRA program. Fleming, who was a Georgia delegate for Obama in his 2008 campaign, now serves as the Southeast regional director of the Environmental Protection Agency.

Burrell said the gas initially will be used to fuel 70 vehicles. Eventually, the county intends to convert its fleet of about 300 sanitation vehicles to run on the fuel.

Last year, the county bought 24 Freightliner CNG trucks for sanitation and maintenance operations. The county is supporting the shift to bio-fuel by building two fueling stations for CNG-powered cars and trucks.

The new facility has the capacity to replace 17 million gallons of fuel a year, said Ted Photakis, a senior account executive with Energy System Group.

The methane gas will be collected until at least 2091, when the operating permit expires, Ted Photakis said. He commended Billy Malone, DeKalb’s director of sanitation, for his vision in outlining the bio-fuel concept in 2005.

Former DeKalb CEO Vernon Jones started the recovery program that sells methane to Georgia Power. Jones, who did not attend Monday’s ceremony, said the initial investment of $4 million has been recovered and the program now earns money that helps pay for the county’s operations.

“The technology was there, the resources were there, and it was just a matter of getting it done,” Jones said. “It was taking something nobody wants in their neighborhood, a landfill, and making money from it. That’s the epitome of taking resources that were being thrown away, and reusing them in ways that are safe, sound, environmentally effective, and profitable for the county.” 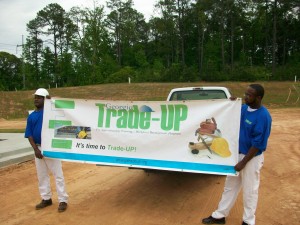 Georgia Trade Up plans to begin training workers who will become certified to work in the green industry. Credit: David Pendered