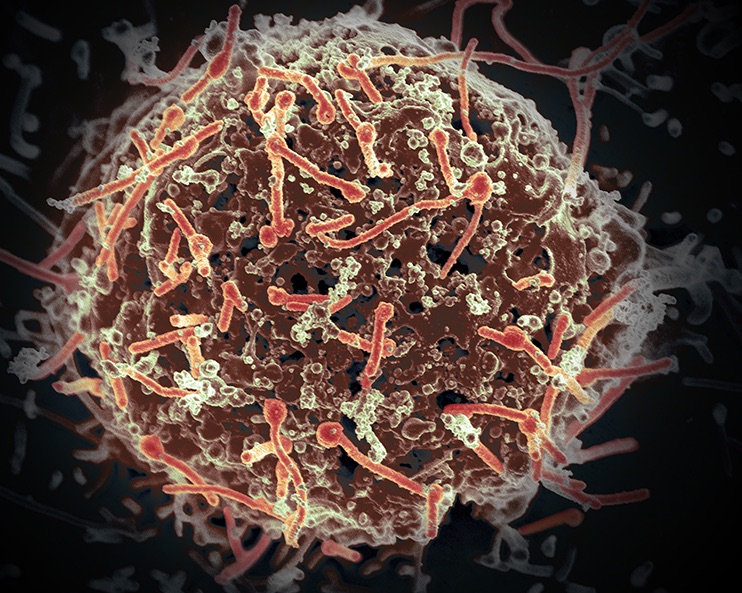 As several aid workers exposed to the Ebola virus arrive for monitoring in Atlanta, researchers from Emory University and the CDC report progress in their efforts to improve treatment of the disease. 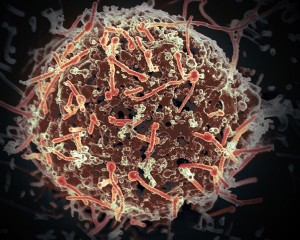 The events serve to remind that while public attention to the Ebola virus may have waned in recent months, the fight to contain the virus goes on. The current Ebola outbreak has caused the death of 9,976 persons and sickened an additional 24,282, according to the latest report from the World Health Organization.

The clinicians to be monitored in Atlanta work with Partners in Health, a Boston-based aid organization co-founded by Dr. Paul Farmer. The clinicians came into contact with a colleague who tested positive for the virus March 11 in Sierra Leone. None is thought to be infected with the virus, according to a PIH statement.

One clinician arrived in Atlanta over the weekend and is in voluntary isolation in housing near Emory University, according to a CNN report. Three clinicians were slated to arrive Monday, according to the report. 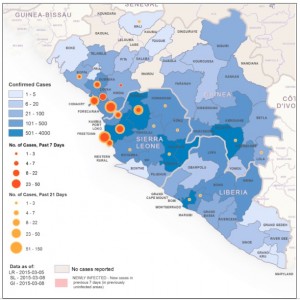 The CDC classifies three countries as having widespread transmission of the Ebola virus across the entire country: Guinea, Liberia, and Sierra Leone. Credit: WHO

Protocol calls for the clinicians to remain isolated and monitored for 21 days after their date of exposure to the disease. If signs of the disease arise, they can be admitted and treated at the nearby Emory University Hospital. Emory’s hospital is one of the nation’s three designated biocontainment facilities.

The research program is being conducted with blood samples donated by four patients who survived the Ebola virus following treatment last year at Emory hospital.

The work involves 10 institutions. It is funded with a grant of up to $10.8 million grant from the Defense Advanced Research Projects Agency. Any experiments involving live Ebola virus are to be performed in Biosafety Level 4 laboratories at the CDC or the U.S. Army Medical Research Institute of Infectious Diseases, according to a statement from Emory University.

Scientists seek to develop antibodies that target Ebola viruses in order to devise improved therapeutics and vaccines, according to an Emory statement. They hope to discover if patients produced antibodies that address more than one strain of the virus.

This is how the scientists described the significance of their discovery when findings were published March 9 in Proceedings of the National Academy of Sciences: 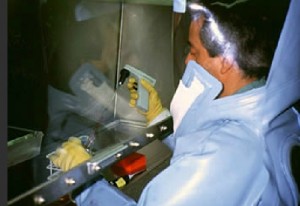 Previous research had indicated that immune responses could be impaired.

Scientists have reported discovering that a high proportion of the patients’ B cells and T cells were activated. B cells generate antibodies, and T cells directly kill infected cells.

The CD8+ T cells targeted a number of proteins, and a major target was the nucleoprotein of the virus, according to an Emory statement.

The nucleoprotein performs a vital role in the virus’ replication, according to a 2006 report by the National Institutes of Health.

This discovery sets the stage for research focused on the improvement of existing vaccines now entering clinical trials in Africa. These vaccines contain only an external glycoprotein. The addition of the nucleoprotein to these vaccines could possibly generate stronger T cell reactions, according to a statement from Emory.

“CD8+ T cell responses have been associated with vaccine protection against Ebola infection in some animal models,” lead author Dr. Anita McElroy said in an Emory statement. “But the relative importance of T cell responses, compared to antibody responses, in driving survival and vaccine efficacy in humans is not known. We anticipate it will be an active area of research in the future.”

Previous Article
Georgia coast lucky coalition came together to support the Coastal Marshland Protection Act of 1970
Next Article
Did you know vein disease affects about half of people over the age of 50?