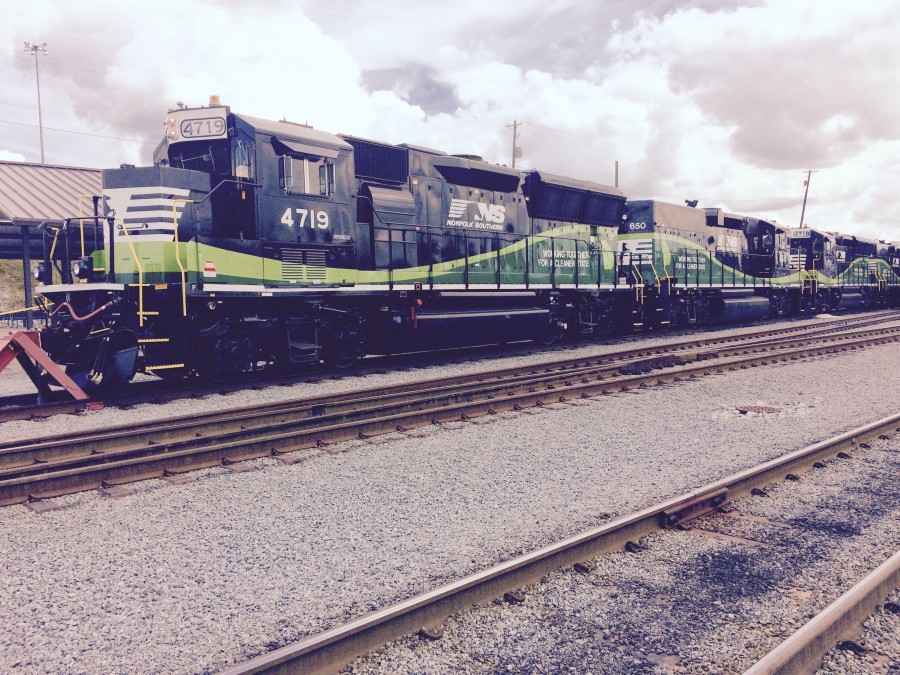 Norfolk Southern's "Eco" locomotives line up at Inman Yard for their unveiling on Sept. 1 (Photos by Maria Saporta)

The most fuel-efficient mode of transportation is becoming even more efficient.

“The efforts by Norfolk Southern in designing and building these locomotives will lead to cleaner air in Atlanta,” said Beverly Banister, a division director for the Environmental Protection Agency’s Region 4.

Banister explained the federal government contributed $38 million to the entire project – about two-thirds of the overall cost to build 10 paired locomotives. Norfolk Southern paid for the rest – a true public-private partnership.

“It is a great investment,” Banister said. “It’s great for Atlanta because Atlanta has challenges with its air.” 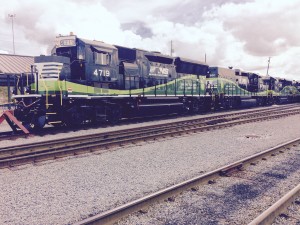 Norfolk Southern’s “Eco” locomotives line up at Inman Yard for their unveiling on Sept. 1 (Photos by Maria Saporta)

Mark Manion, Norfolk Southern’s chief operating officer and an executive vice president, explained that there are two locomotives coupled together – a mother and a mate. The “mother” serves as a diesel power plant for the locomotive with an alternator that converts the power into electricity. On the axels, there are traction motors that increase the locomotives’ efficiency.

These locomotives are between 18 to 25 percent more efficient than traditional locomotives,” according to Mark Duve, Norfolk Southern’s mechanical engineer – locomotive.

Duve explained why trains are so much more fuel efficient than trucks. 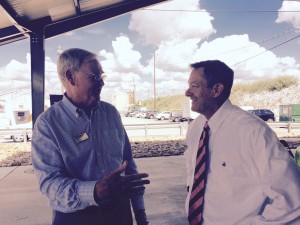 Duve said that the engines on locomotives are bigger, which allow for greater efficiency. And lastly, because a train has several cars stacked behind each other, there is less drag between the cars, which also saves fuel. By comparison, most trucks carry only one trailer, meaning they face greater wind resistance.

As a result, studies have shown that trains with traditional locomotives are about four times more fuel efficient than trucks and have fewer emissions of pollutants in the air.

Even the trucking industry has realized the benefits of rail.

“Trucking companies are lining up at the door wanting to move long-haul freight by rail,” Manion said.

So here are the facts. It is far better for the environment and far more fuel efficient to move more freight by rail than over roads. Obviously the same would be true in moving people. 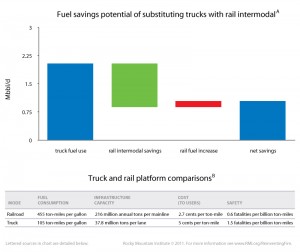 In order to get more freight and passenger traffic to move on rail, we as a nation should invest – in a public-private venture with the railroads – in upgrading our rail infrastructure.

That means fewer at-grade crossings, more doubling tracking, straightening out sharp curves to achieve faster speeds and making sure the tracks are in first-class shape.

Those investments would allow the trains to reach faster speeds, which would allow them to deliver more perishable items in a timely manner and make railroads less dependent on moving commodities like coal.

It also would make it possible our rail corridors to carry passengers and freight – providing energy efficient alternatives to cars, trucks and planes.

Manion said the Class A railroads already have been investing more than $2 billion a year in their infrastructure – and even more than that in the past couple of years.

“We invest about 17 to 18 percent of our revenues on capital improvements every year,” he said. “It’s quite a commitment.”

Manion did sound open to making room for passenger trains if there were upgrades in the nation’s railroad infrastructure. 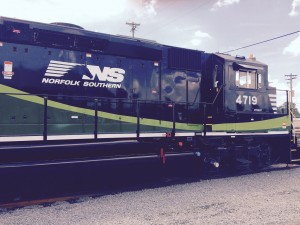 “There’s a balance here,” he said. “If there were to be enough infrastructure, then freight and passenger could co-exist. There’s got to be enough investment because we have commitments to our freight customers with our on-time performance.”

If we invested to improve our rail infrastructure, every one will win. Freight customers will get better service. People would have more options on how to get around. We would be able to save fuel. And we would be able to lower our emissions – reducing air pollution.

“We have done many things to reduce our carbon footprint,” said Bruno Maestri, Norfolk Southern’s vice president of government relations, corporate communications and sustainability. “In the last five years we have reduced it by 8.5 percent, and we are about to reduce it by another big chunk in the next five years. The ‘Eco’ locomotives will be part of that.”

Just imagine how much good that could happen in our country if our railroads and governments could dream big and partner together.

Note to readers: Next week, my column will look at the unique role railroads can play in the sustainable redevelopment of our cities and towns.