In Baz Luhrmann’s movies, everything happens everywhere all at once. Think of “Moulin Rouge” or his take on “The Great Gatsby.”

For some, his work is deliriously fizzy and full of itself. For others (say, me), it’s flamboyant overkill, as frenetic as it is empty-headed.

And now we have “Elvis,” a biography of Elvis Presley that will strike Luhrmann fans as exactly what they long for, and Elvis fans as a near-blasphemous desecration of everything that made the King, well, the King.

Now, I’m a Beatles baby, through and through. Even so, it’s impossible not to recognize the mind-blowing talent and unique charisma that defined Elvis. Alas, Luhrmann’s biofilm is more like an Elvis impersonator – bloated and bejeweled, barely skimming the surface of one of the most original entertainers who ever lived. 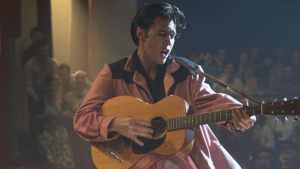 The picture is told from the viewpoint of his manager, Colonel Tom Parker, played by a prosthetically-overburdened Tom Hanks. Parker, who turns out to be a mysterious European with a carney background, is the Devil in this Passion of the Elvis, a greedy bloodsucker who used the singer until, ultimately, he used him all up. As most of us know Elvis died age 42 of an apparent overdose.

But this “Elvis,” as far as I can tell, isn’t interested in anyone who knows much of anything about the King. It’s as if it were made for people who couldn’t tell you where they were when they heard Elvis had died. 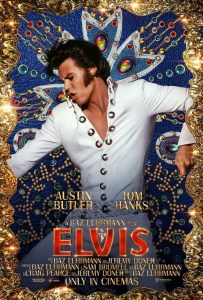 Skip ahead a few years and enter adult Elvis (Austin Butler), stage center, doing that thing he did – the voice, those hips, the jet-black hair, the white-boy overlay of so-called race music. Most of all, the sexuality; our satanic Colonel Parker takes one look at the panting teenage girls in the audience, and he sees the future – his, as much as Elvis’s. Here is something – someone – he can sell and sell and sell.

And he does. We watch Elvis ascend to the top of the charts (and, seemingly, the world). He becomes a lightning rod for racial angst. He’s drafted and meets his future wife, Priscilla (Olivia Dejonge). That she’s only 14 is conveniently overlooked.

Released from the Army, Elvis Goes Hollywood, seemingly making the same movie over and over (you tell me the difference between “Clambake’ and “Tickle Me”). The Beatles happen. Elvis needs a comeback and gets one with a 1968 concert that’s supposed to be a kitschy Christmas special but instead hints at the power that Elvis still miraculously retained despite mismanagement on every level (from the Colonel’s gambling problems to the star’s own drug addictions). 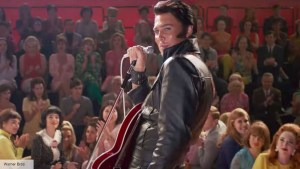 A scene from “Elvis”

Eventually, we end up at the International Hotel in Vegas, with Elvis tied to a five-year contract, entertaining the faithful, making his entrance to “Thus Spake Zarathustra,” and occasionally reaching his former magnificence with a soul-wrenching gospel song. The film’s final sequence is an astonishing injection of reality – a documentary clip of Elvis himself, a magnificent wreck, but still giving the fans his all.

Butler, who was recommended to Luhrmann by no less than Denzel Washington, deserves the praise he’s been getting. He doesn’t really look like Elvis; he’s more John Travolta in “Grease.” And he doesn’t do his own singing; his vocals are mixed with Elvis’s originals. But, more than his director, he gets something of the wild magic that made Elvis a legend.

Still, he can’t get inside Elvis, and he gets no help from Luhrmann or the script. In this movie, Elvis hasn’t left the building.  That’s because he never really entered to begin with.

“Elvis” is still in movie theaters, and it also is available through video on demand.