In Autumn de Wilde’s crisp and spirited adaptation of Jane Austen’s “Emma.,” it’s hard to say which is prettier: the pastries or the Empire dresses. Since both are rendered in breathtaking pastels, it probably doesn’t matter.

What does matter is that, despite competition from two excellent predecessors (the 1996 Gwyneth Paltrow version and “Clueless,” the ever-so-clever Alicia Silverstone update), this “Emma” couldn’t be more delightful. 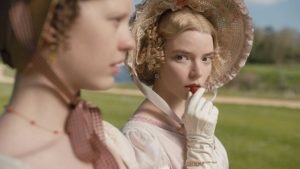 A scene from the movie “Emma”

It begins with an introduction to our heroine, which sounds like it’s lifted straight from Austen herself (Full confession: I’ve never read her). Turns out, it’s pretty close, telling us Emma Woodhouse “had lived almost 21 years with very little to vex her.”

As we soon learn, Emma’s expertise is in being vexing rather than being vexed. Pretty and privileged, she lives on an immense estate outside London with her widower father, a hypochondriac of the most extreme sort (He is also, as played by that expert scene-stealer Bill Nighy, a wonderful running joke, whether panicking over the possibility of snow or sensing the potential of a deadly draft in every opened door).

There is this nice farmer she likes, and he has proposed. But to the meddlesome Emma, this match just won’t do. Harriet needs someone higher on the social scale. Say, the local vicar, Mr. Elton (John O’Connor). 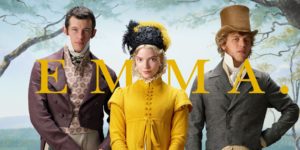 A poster of “Emma”

This is merely the first of many miscalculations Emma will make, some merrier than others. Also caught up in her social machinations are Frank Churchill (Callum Turner), the son of a prosperous neighbor; Jane Fairfax (Amber Anderson), a mysterious singleton newly arrived on the scene; Miss Bates (Miranda Hart), a pathetic gossip who lives with her elderly mother; and Mr. Knightley (Johnny Flynn), Emma’s long-time close friend (they are distant in-laws), who watches her efforts with a mixture of amusement and, when necessary, appropriate moral indignation.

The aforementioned Nighy is just one of many astute Brits (see the cast list above) capable of grabbing our attention. But as Emma, the Bambi-eyed Anya Taylor-Jones more than holds her own. Her Emma isn’t arrogant exactly – or mean-spirited (with one notable exception) – but her self-assurance is blinkered and often misguided.

That we never lose affection for her, even at her most intrusive, is a tribute to her likability and talent. Like Oscar winner Emma Stone, Taylor-Jones gives the notion of “wide-eyed” a whole new dimension.

And she looks pretty in pink. Really pretty.

Previous Article
Norfolk Southern could sell its new headquarters in five years, company says in disclosure
Next Article
Adapting During the Coronavirus Outbreak