Emory University and its environs would benefit from the single largest transit investment that’s planned in the proposed 1 percent sales tax for transportation. 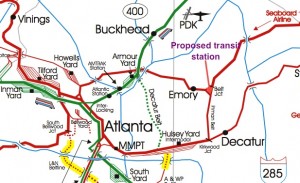 The route called the “Clifton Road Corridor” is earmarked to receive $700 million in sales tax funding. The new line would stretch 4.3 miles from MARTA’s Lindbergh Station to a proposed station at the junction of two CSX rail lines, near the corner of North Decatur and Clairmont roads.

The route would serve Emory, the Centers for Disease Control and Prevention, and a $250 million mixed use development started last summer by Cousins Properties and Gables Residential.

This line has come into political play as DeKalb County officials jockey for more money to establish a transit line along I-20, in south DeKalb. The issue is likely to come up at Thursday’s planned meeting of the Atlanta Region Transportation Roundtable.

DeKalb County Commissioner Lee May has suggested reallocating money from the Clifton Corridor to I-20. May is not a member of the roundtable and does not have standing to submit this proposal.

DeKalb CEO Burrell Ellis, who is a roundtable member, notified the board at its Sept. 28 meeting that he would fund more of the I-20 line by reallocating some of the $172.5 million in sales tax dollars that have been earmarked to improve the intersection of Ga. 400 and I-285.

Regardless of whether any funding is whittled from the Clifton Corridor, the route can’t be completed with the earmark provided. That’s according to the original cost estimates released in August by GRTA.

GRTA pegged the project at $1.3 billion. Of that, $1 billion is for construction and $313 million would defray 20 years worth of operating expenses.

The line would open in 2022, according to the report. Key default risks include an agreement with CSX, which controls the corridor, vs. adjacent right-of-way; opposition from residents; and the limits of tunnel construction “may significantly increase.”

Emory has been a reliable supporter of the Clifton Corridor proposal for the many years the project has been on MARTA’s drawing boards.

An article in the Aug. 22 edition of Update, a publication of Woodruff Health Sciences Center, urges readers to contact the roundtable members and lobby for the route.

The story included a link to the membership roster of the roundtable (which now connects to an expired document), and a telephone number for Betty Willis, Emory’s senior associate vice president for government and community affairs.

The article includes this description of the need for the transit line:

“According to Willis, the Clifton Corridor is the largest activity center in the Atlanta region with no direct access to the interstate or MARTA. The fact that the corridor is one of the largest employment hubs in the metro area is a major factor pushing the project, she says.

“Additional job growth is expected with various construction and expansion projects under way or in planning, including the new health sciences research building that broke ground in June, the planned new bed tower for Emory University Hospital, expansion at CDC, and Emory Point, the new mixed-use development under construction on Clifton Road.”

Cousins Properties and Gables Residential have teamed up to build the first phase of Emory Point, which is a planned 50-acre development.

The project was started this past summer after a delay of three years that related to the recession. Three phases are planned.

The first phase is to include 443 luxury rental apartment and 80,000 square feet of retail space, according to a press release issued by Cousins.

“We’re very excited about Emory Point and are glad to see a development of this magnitude move forward. This project represents an incredible infill opportunity in a supply constrained submarket with high demand.

“We’re fortunate to have an exceptional partner in Gables and are grateful for our strong relationship with Emory University, which trusted us with leading this opportunity,” Gellerstedt’s statement concluded.

Previous Article
Move over ‘Moneyball’ and Brad Pitt — ‘lovable animials’ beat you at the box office
Next Article
Delta’s Richard Anderson makes plea for United Way and for U.S. businesses